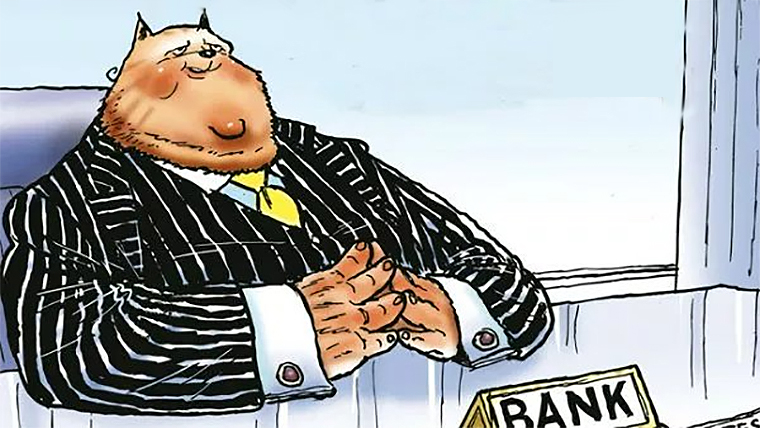 Three of the four - ANZ NZ, ASB*, and Westpac NZ - have reported their annual financial results to date. BNZ follows on Tuesday, November 9.

The three who have reported so far have delivered combined annual net profit after tax of $4.171 billion. That's $957 million shy of the $5.128 billion the four, combined, reported in the record year of 2018.

BNZ's profit for the first nine months of its September 2021 year reached $978 million. It therefore appears on track to top its record annual profit of $1.038 billion made in 2015.

Whilst net interest margins and return on equity are perhaps worthier measures of bank profitability, the measure the average customer understands best is raw profit. And in a world dominated by the Covid-19 pandemic, the major banks have done mighty well on this front.

They have, of course, been assisted by government and Reserve Bank measures such as the wage subsidy scheme, mortgage deferral scheme, a record low Official Cash Rate encouraging record levels of housing borrowing, and removal last year of loan-to-value ratio restrictions on housing lending. This year's profits are also boosted by the banks writing back some of the loan loss provisions made last year in the early phase of the pandemic.

Back in August I reported that NZ's banking sector could post annual profit of $6 billion for the first time this year. Aside from the big four other banks including Kiwibank, TSB, SBS Bank and The Co-operative Bank have also posted strong profit this year, albeit off their more modest bases. Based on figures from KPMG's annual Financial Institutions Performance Survey, the banking sector's record annual net profit after tax to date was $5.77 billion in the year to September 30, 2018.

Reserve Bank Governor Adrian Orr called for banks to use their balance sheets to support households and businesses facing higher inflation and rising interest costs, firstly at last Thursday's virtual Institute of Financial Professionals NZ conference, and again when releasing the bi-annual Financial Stability Report on Wednesday. Effectively Orr is urging banks not to take the umbrellas away from customers when rain comes.

Meanwhile in its Financial Stability Report, the Reserve Bank argues that although the four Aussie owned banks continue to dominate NZ banking, their dominance isn't quite as complete as it has been.

"While New Zealand’s overall banking industry continues to be dominated by the four large Australian-owned institutions, measures of concentration across key bank lending and deposit markets point to gradually decreasing levels of market concentration since the last major change to the industry structure when ANZ acquired the National Bank [see the chart below]," the Reserve Bank says.

"Domestic-owned banks have grown their market shares in the residential mortgage lending and household deposit markets over the past two decades. In agricultural and business lending, strong competition from other foreign-owned banks has seen the market share of the Australian-owned banks decline, particularly over the past five years. In addition, differences in their long-term growth strategies for agricultural and business lending have seen the Australian-owned banks converge to now having more even market shares amongst themselves than was the case in the early 2000s."

Switching banks is a relatively easy, low friction process with the banks doing most of the work. The full list of NZ's registered banks is here. 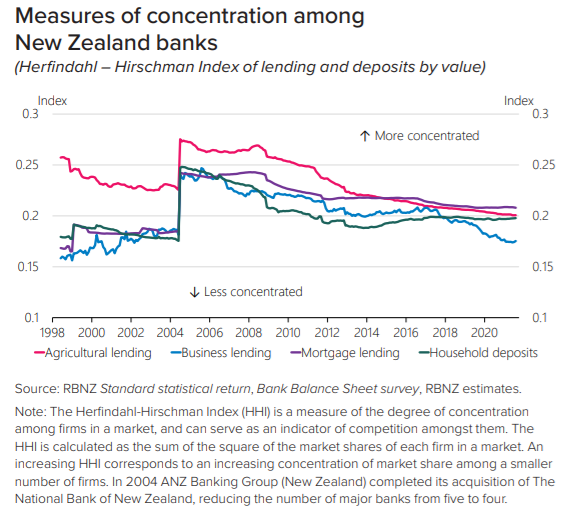 *ASB's profit is for the June year. ANZ and Westpac's figures are for the September year. ASB's September quarter financial results won't be available until the Reserve Bank's Bank Financial Strength Dashboard is updated on November 26.

Basically because of record levels of lending = record levels of Debt = Record profits. This simply cannot be sustainable long term but then again the whole way were are treating this planet isn't either.

The problem too, is that the banks are riding the property boom with nothing to replace it!

It's a great time to be a bank shareholder. While every man and his dog piles into the property market, I can just sit back and enjoy the ride. No property manager taking a cut of my profits, don't have to deal with tenants, and I could be anywhere in the World!

I can't blame you. Nothing prevents people who are always complaining about banks profits from purchasing shares in such banks.

I purchased quite a bit of CBA shares last June, and I have already had a net return of over 60% in a little over 1 year.

But investing in shares only really makes sense if you have a relatively long investment horizon, and you must be ready to ride significant short term volatility. I saw in this site a few readers panicking after a 2% drop in the sharemarket, for example, and such people had better stay away from the sharemarket altogether.

You made a better decision than me!

1987, the European bank I worked for was privatised - spun out of Govt ownership, as the CBA was a few years later, and we staff got a bargain discounted price of €48 a share - 2 year lock-in. What could go wrong! I just checked and today, after nearly 35 years of market ups-and-downs; trading scandals and political changes, those same share are trading at.....tada! ...€30. (PS: €39, to answer your next question)

Your train of thought is similar to mine - except I have crypto. Why would anyone want to own a rental lol. I could have brought 5 mortgage free houses in Auckland for the amount of gains this year alone from crypto. I just laugh and my friends who want a rental.

That's incredible. Kinda wish that I'd put more in, but have done reasonably well. I'm up about 200% since January.

Taken in isolation it may seem incredible and on a personal level I guess it is, but in crypto land it is nothing. I put my balls on the line during the Covid 19 dump in 2020 when everyone else was panic selling and have been rewarded handsomely.

Congratulations on your gains mate, I think you will be very happy in the next few months. Don't forget to take some profit :D

Hopefully they put some aside for a rainy day and don’t go looking for handouts when it all turns to custard.

Nothing like collecting dividends and getting rich from stock buy backs.

Since most of the profits are only possible through the government, shareholders should view the windfall as a form of tax refund from the government- thank you!

Christmas and New Year should be well celebrated this year.

Are the staff at frontline getting any bonus ?

The foot soldiers? I doubt it. They may get some kind of digital card thanking them for all their hard work.

I had an online banking issue with one of the banks that has been solved but it took 14 months. The CSR who handled my initial complaint struck up a customer relationship with me and took it all the way to the head of innovation and CTO with help from me (I contacted these people directly through my network). IMO, the CSR was the only person who saw the problem through from beginning to end. He's a hero in my mind and the type of person who I would want in management. The head of innovation seems little more than a brand advocate and the CTO (PhD from Auckland Uni I believe) was as useful as tits on a bull. This is a bank that likes to virtue signal its community and innovation focus. It's NS as far as I'm concerned. The real innovation is not happening at Aussie / NZ banks.

Thanks to the the last three governments. Your legacy.

They are milking more dollars by putting mortgage rates up. Sometime next year they might take people out by surprise offering special low rates again.