NZIER Shadow Board calls for RBNZ to keep interest rates on hold, yet changes tack to a tightening bias

Bonds
NZIER Shadow Board calls for RBNZ to keep interest rates on hold, yet changes tack to a tightening bias 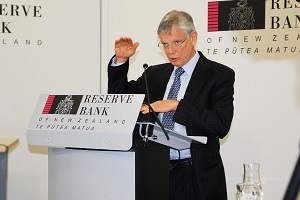 The tables have turned and the New Zealand Institute of Economic Research’s (NZIER) Monetary Policy Shadow Board has shifted to a tightening bias.

The nine business leaders, economists and academics on the Board are calling for the Reserve Bank (RBNZ) to keep the Official Cash Rate (OCR) on hold at 1.75% when it is reviewed on Thursday.

With their average recommended rate being 1.79%, none see reason for the RBNZ to cut rates further.

“Annual inflation has edged back up to within the Reserve Bank’s 1-3% target band, and there is solid momentum in the New Zealand economy. The Shadow Board sees very little need for further easing,” NZIER senior economist, Christina Leung, says.

“With inflation picking up we expect the Reserve Bank to leave the OCR on hold until mid-2018 before embarking on a gradual tightening cycle.”

The Shadow Board was in favour of further monetary policy easing in November, before the OCR was cut from 2%. 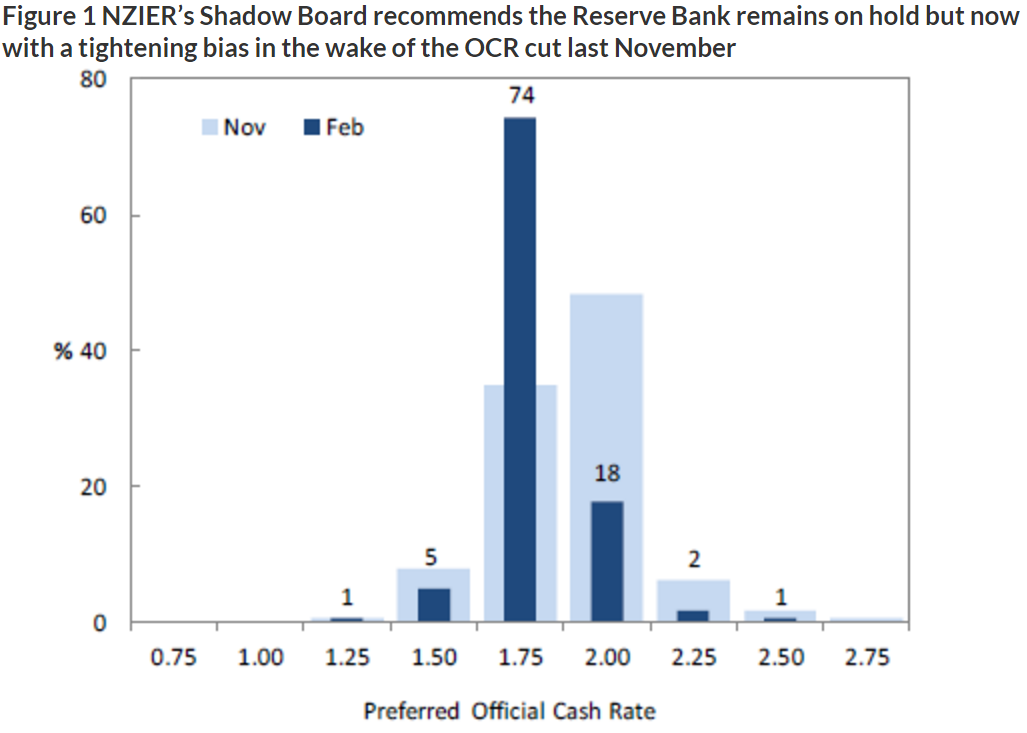 MYOB general manager Carolyn Luey explains: “We believe the RBNZ should leave rates unchanged. Small businesses (especially in construction and tourism) tell us they are doing really well, while the dairy price effect has subsided – so cuts are off the table for the foreseeable future. Even though inflation is just starting to tick up, we believe the Bank should hold – especially given uncertainty in the global economy.”

Kiwibank chief economist Zoe Wallis adds: “Downside risks (particularly on the international front) have abated for now but could easily reappear this year. The domestic economy is performing well and inflation is heading in the right direction, but it is too early to talk about rate hikes at this stage.

MOTU senior fellow and Auckland University professor Arthur Grimes says: “With inflation being within the target range for the foreseeable future, there is no major reason to raise or lower the OCR at this time.”

VUW professor Viv Hall has a similar view: “Temporary influences continue to affect headline CPI inflation measures, but trend CPI inflation continues to pick up modestly. I expect the next OCR movement to be upwards, but there is not yet sufficient evidence to justify sustained OCR increases.”

BNZ head of research Stephen Toplis is the Board member most in favour of monetary policy tightening. He says: “Inflation continues to be held down by a strong NZD but we believe that a rising CPI, tight labour market, ongoing strength in housing and solid GDP growth all argue that the cash rate should be at least as high as where it is now.”

On the contrary, Westpac acting chief economist Michael Gordon, is least in favour of this move and maintains: “Inflation is back within the target range, but with a strong NZ dollar and only modest economic growth it will struggle to push much higher from here. The need for the RBNZ to reverse its OCR cuts looks rather distant.” Now the interest rates are not going up, you can work out what that means for the property market..

Indeed, irrespective of CPI inflation. Which begs the question,just what was the RBNZ targeting, if not asset prices?

A monetary policy regime narrowly focused on controlling near-term inflation removes the need to tighten policy when financial booms take hold against the backdrop of low and stable inflation. And major positive supply side developments, such as those associated with the globalisation of the real side of the economy, provide plenty of fuel for financial booms: they raise growth potential and hence the scope for credit and asset price booms while at the same time putting downward pressure on inflation, thereby constraining the room for monetary policy tightening. Borio page 12 of 38.

A financial security is nothing but a claim to some future set of cash flows. The actual "wealth" is embodied in those future cash flows and the value-added production that generates them. Every security that is issued has to be held by someone until that security is retired. So elevating the current price that investors pay for a given set of future cash flows simply brings forward investment returns that would have otherwise been earned later, leaving little but poorly-compensated risk on the table for the future. Read more

Property prices will keep its down trend...

Interest rates are already low as they are, currently ANZ 4.45% for 1 year fix, and if the rates stay this way the property down trend will slow down as more people will be able to get on the property ladder, prices will keep hold and stabilize.

Currently NZ is in a good economic state, too much drop in the property market will cause economic down turn as investors will no longer be able to make repayments.

It does have the syntax and underlying message of Ted. The Ted Shadow Board recommends he's holding his bias.

Currently NZ is in a good economic state, too much drop in the property market will cause economic down turn as investors will no longer be able to make repayments.

When is it a good time to normalise official interest rates, given that the OCR is significantly below 2.50%, which not too long along was considered an emergency level under the stewardship of the previous RBNZ governor?

Actually if investors are barely able to cope with interest rate increases then they've taken on too much debt. That's nothing to do with the economy doing well, it's financial mismanagement.

haha.. No its not Ted

RBNZ has never disclosed the entire truth about its gains and losses, but looking at the over all picture, unemployment low, migration high, kiwi dollar up and not to mention the property market still high, I would say the countries economic is not doing too bad?

Yes if the interest rates went up it will not turn out good, not just for the investors but also for the bank, and this is one of the reasons why the RBNZ to keep its rates on hold.

Sure RBNZ will likely hold the OCR but the banks are still increasing interest rates. The banks need to hit their $1b profit target. The banks also don't care if a few home owners and investors get thrown under the bus over the next few years as profit targets are more important.

Offshore lending critical for the banks to expand their mortgage book isn't likely to get cheaper in the near future, so expect a gradual increase.

Every mortgagee sale is a loss for the bank, gradual increases yes, and that will insure the safety of their investment with investors, RBNZ is watching the market, and even more so the investors, the data (transactions) they receive will speak for itself, RBNZ will do what is profitable for them and that is not to let the property market drop too much.

Very hopeful, banks will force people to sell at no loss to itself, that is why the RB brought in the LVR, to protect the banks not its customers