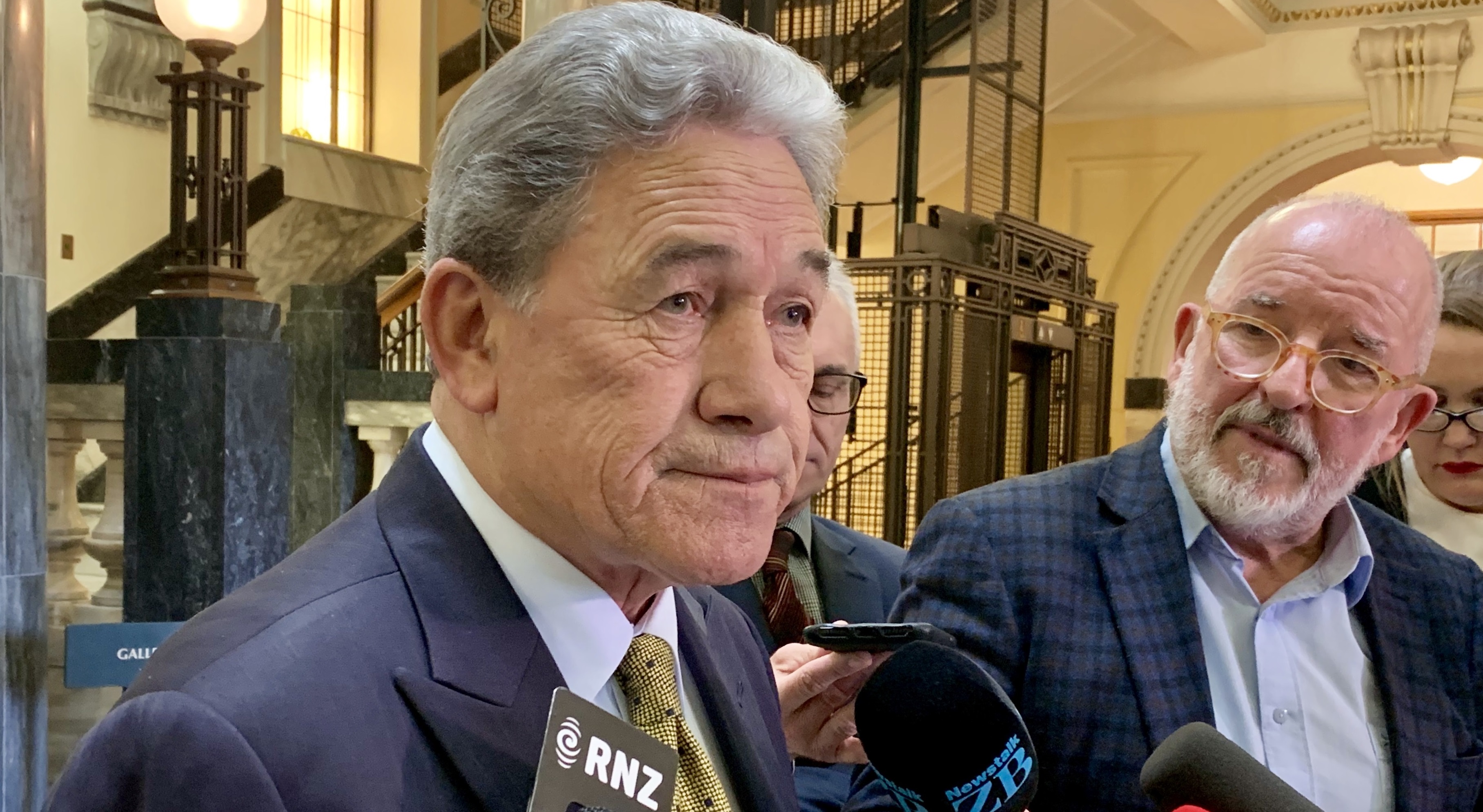 Deputy Prime Minister and New Zealand First Leader Winston Peters has told unionists they are “asking for the impossible” if they “expect a massive shift in industrial relations in just three years”.

He made the comment during a speech at a Council of Trade Unions (CTU) conference on Tuesday.

The CTU is urging the Government to get on with introducing legislation to give workers a framework to negotiate fair pay agreements.

A working group, led by former National Party prime minister Jim Bolger, in December reported back to the Government on how it believed a system of bargaining to set minimum terms and conditions of employment across industries or occupations should be designed, and what its scope should be.

"We all know what is needed to make good fair pay agreement law - the work has been done. Now is the time for action," CTU President Richard Wagstaff said.

However speaking to media after Peters delivered his speech, Prime Minister Jacinda Ardern said work was still underway “building consensus across the Government”.

Asked if NZ First was the handbrake, Ardern responded: “Consensus does take time, but hopefully that means, of course, that the changes that we make are long-lasting.”

She opened her speech at the CTU conference later on Tuesday afternoon, making a similar point.

"Both NZ First and the Greens have maintained strong voices, and achieved important results in different areas within the Government," Ardern said.

"And that is the reality of our government. Nothing can be done without the full support and votes of each party in it."

Ardern said fair pay agreements were part of the "longer term solution" for low wage earners, and the Minister would announce "progress" on that "soon".

Back in August 2018, Ardern told the business community she envisaged fair pay agreements being introduced slowly, with no more than one or two concluding during this electoral term.

Peters: 'Capitalism with a human face'

Peters, during his speech to the CTU, dampened unionists’ hopes of his party moving quickly to support fair pay agreement legislation.

He distanced NZ First from both Labour and National, pitching it as a “centrist party”.

“Whilst we recognise and respect your organisations’ right to strike, your timing is unfortunate to say the least.

“While conditions for much of the workforce deteriorated under the previous government with stagnant wages and a rising cost of living, you sat on your laurels.

“Now, just as right wing governments and private interests exploit perceived vulnerabilities to exploit their agendas, some unions have attempted to do the same.

“Except it won’t work.

“Significant change to economies and government cannot occur overnight without massive disruption to the most vulnerable - despite Marxists and Neoliberals’ parallel claims to the contrary.

“We are in our first term. If you expect a massive shift in industrial relations in just three years, you are asking for the impossible.

“This is not a Government of irresponsible sedition, nor is it merely a modified status quo.

“We are open for work, and we are open for business. All we ask is that all parties in the industrial relations equation start behaving the same way.”

Speaking to media, NZ First MP Shane Jones further detailed his party’s thinking on the matter, reiterating how he was a “pro-industry politician”.

“Our party wants to be absolutely sure that we don’t impose uniform or universal obligations on businesses, because there’s a different cost structure between Eketahuna, Invercargill and Auckland,” he said.

“We need to be mindful of the actual businesses and their free cash flow to absorb the transitional costs.”

Wagstaff said its proposed framework “ensures agreements will cover all people working in an industry or sector, and provide them a real voice through their unions to collectively negotiate their pay and conditions like leave, overtime, training and hours of work.

“It ensures good employers will not be disadvantaged by a minority of exploitative employers.

“It will give independent arbitrators the power to resolve any disagreements in a way that is flexible enough to address the uncertain future of work.

“Finally, any agreed fair pay agreements need to be final, and not subject to unnecessary further hurdles or dilution...

"Too many working people in low paid industries like cleaning, security and supermarkets struggle to make ends meet."

Baubles Peters doing something to limit the potential policy damage he is responsible for enabling in the first place.

... my greatest disappointment with NZF is that they allowed Taxcinda to shut down our natural gas industry ...

. . and , to make up the shortfall of gas , Genesis are importing coal to burn , from Indonesia . ..

Winston ! . .. why did you allow this insanity to occur ?

Er, who represents the workers in all this? The non-unionised majority, that is. There is the suspicion that the unions represent their union organisation, not necessarily their members. The same as the present government doesn't represent my point of view and I didn't vote for them.

If you want to be represented by a union, join one.

If you don't want to be represented by a union, then continue to represent yourself individually.

You can't have it both ways.

His question, within the context of union awards becoming the base remuneration across entire industries, makes perfect sense.

... industry awards are only equitable if the costs of running a business , and the costs of living , are identical throughout the country .

But , they are not , are they .. " base remuneration agreements " have been consigned to history for good reasons . ...

Not sure why someone not in a union would care about base industry awards.

If it's less than what you get paid already, why does it matter? If it's more, then you get a pay bump without having to pay union fees.

However Peters, during his speech to the CTU, dampened unionists’ hopes of his party moving quickly to support fair pay agreement legislation.

From another thread:
Talk is cheap. Tax paying citizens have forward liabilities that mount up in present value terms every time interest rates are cut.

Winston Peters needs to rein in a reckless RBNZ which is oblivious to the consequences of it's actions. OCR has been cut in half three times since July 2008 with no obvious tangible outcomes beyond rampant asset inflation and the consequences thereof.

Your comments are valuable Audaxes. Can never imagine the value of what you point out seeping into mainstream NZ thinking.

Thank you J.C. It was never obvious to many in my London, US based G-SIB bank, beyond the inner circle of my bond and futures trading associates - we spent a lot of time seeking out all the possible negatives and positives that might impact the returns of the then industrial size proprietary trading position.

Audaxes, with your background, you should perhaps consider contributing a Narticle for the wider education of Interest readers.

What happened to the handbrake on immigration ? did the cable break ?

He is looking a lot older than usual.

I think he's probably aware that it's turning to custard.

Indeed he mentioned that at the beginning of the term.

NZF without Winston dosen't get 5% of the vote.

... NZF are struggling in the polls to get 5 % with Winston ... the elderly custard munchers are dropping off the peg ...

And without Sir Winsome , NZF are dog tucker . . . gone by lunch time ... BANG BANG BANG ... gone quicker than a bullet from Shane Jones with an AR-15 semi-automatic rifle ..... WHOOOSH .. .gone faster than a Labour Party promise ...

he is right, where were they when national was in charge, we didnt see the strikes and marches all over NZ, as soon as there political wing takes office they start striking and marching all over the place.
they need to up their game

I have to assume that the Unions know how unpopular FPA's are with the general public. When Labour was polling in the low 30s and 20s, they couldn't risk handing National another term.

Now they feel like they can burn through some of Jacinda's political capital. Since Labour has wedded themselves to the unions, there's nothing they can do about that.

Trouble is, Jacinda has been tossing her political capital on an open flame and then dousing it with petrol recently.

There are some very good awards being won by various unions, I am noticing the distinct lack of non english capable staff in many of my retail encounters these days which I will out down in part to positive union action but also the low grade education export immigration scams being gradually dismantled although liquor stores still have some way to go...in the meantime, organise and strike till you get your award. Every transport company in the country belongs to a union (the RTUF) so why can't you?

Ever noticed the small print on the cabs of many trucks: 'Contractor to......'? That's why. Having a $700K rig to keep up the payments on does concentrate the mind, and if the wheels ain't turnin', she ain't earnin'......