The Warehouse says it did believe it was an 'essential service' at the time it stated so to the sharemarket; has now cancelled its dividend; profit guidance withdrawn; share price falls

Business
The Warehouse says it did believe it was an 'essential service' at the time it stated so to the sharemarket; has now cancelled its dividend; profit guidance withdrawn; share price falls 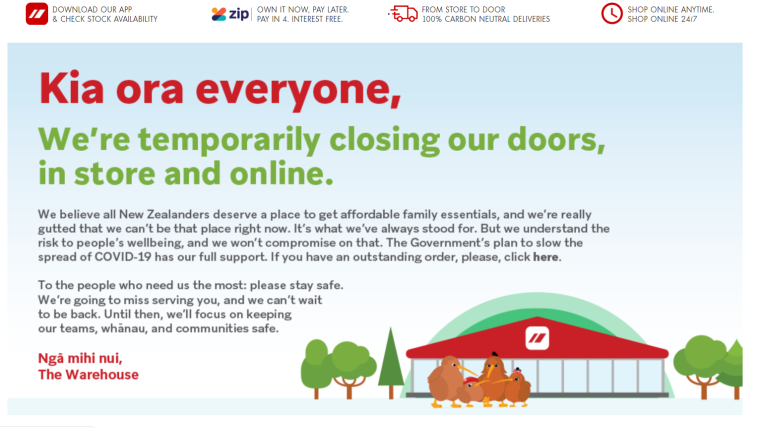 After a day of silence on Wednesday, The Warehouse has finally issued a statement, saying it made in "good faith" its statement earlier this week that it was an essential service and would be remaining open during the lockdown.

The company now says it is cancelling the previously announced 10c a share interim dividend (due to be paid next month) and has withdrawn profit guidance for the year. The share price swiftly fell 37c (over 18%) to $1.65.

The statement on Tuesday by The Warehouse that the 'Red Sheds' would remain open after the Thursday start of the lockdown to provide 'essentials' for New Zealanders caused the company's share price to rocket, up a staggering 52 cents to $2.02.

The news that The Warehouse would be still open while other similar stores would be forced to close was quickly big news in the community and lit up social media with a variety of comments - not all positive by any means.

Later on Tuesday The Warehouse put its shares in trading halt as it said it sought further clarification from the Government on the situation.

The shares remained in a halt on Wednesday, with no statement forthcoming from the company - although it did (see illustration) post on its website that it would in fact be closing the Red Sheds.

The company's group chief executive Nick Grayston said the company had earlier been in contact with Government "for some time" and when on Tuesday morning it confirmed that the Red Sheds would be open "we did so in good faith on the basis of the information we had been given from credible sources, and our strong belief, supported by legal advice, that Red Sheds met the criteria of being an essential service, based on the Government definition of 'any entity involved in the supply, delivery, distribution and sale of food, beverage and other key consumer goods essential for maintaining the wellbeing of people'.

"With the information we had to hand we understood that our significant grocery, toiletries, cleaning, warmth essentials for winter needs and our national coverage meant that we were expected to trade. In addition, at the time of the announcement we were working with our 12,000 team members and suppliers, who were understandably very keen to receive definitive answers around our status as a business.

“On Tuesday further conversations with various Government representatives were undertaken and we established that further clarity was needed and a trading halt was put in place as we sought more information. Later into the evening on Tuesday and well after the trading halt announcement, we heard for the first time the Government’s direction that the Red Sheds should be closed,”  Grayston said.

Grayston said he "completely supports" the need to do everything possible to keep all New Zealanders safe.

"With 12,000 employees at home, our attention will now turn to supporting them in a range of ways and we will focus on that in the coming days.”

Following the release of Grayston's statement The Warehouse shares were brought out of trading halt.

Interestingly their home page showed entirely food items on Tuesday morning.
Clearly motivated to show that they were suppliers of essential food items although food is such a very, very small part of their product range.
Any advantage for a business opportunity - their staff health and safety, the safety of their customers, the success of the country's lock-down all secondary considerations and not part of their decision making.

Warehouse also sell winter essentials in addition to consumables. The weather has already started to cool noticeably, if the govt dont want loud complaints from kiwis in lockup especially older people I would reverse the decision and allow warehouse to open.
Warehouse announcement from as far back as 2013 "The Warehouse Group announced yesterday that it would introduce a ‘career retailer wage’ inspired, in part, by the ‘Living Wage’ campaign."
And this week "The Warehouse Group is paying its 12,000 staff members in full after they were stood down due to the enforced coronavirus lockdown in New Zealand."
A good nz employer, they deserve a break.

It's not really about them 'being a good nz employer', it's that their physical stores would have provided an ideal nidus for coronavirus transmission.

Just imagine how many people would have gone there to browse or shop (especially given the constraints on other retailers). If the government are serious about reducing transmission (and they appear to be) then shutting their stores had to be done, leaving them open would have made a joke of this whole thing.

I was there on tuesday and they were extremely responsible with staff observing the 2m rule and lots of notices to customers. Also only allowing limited people in at a time. How are the supermkts handling it? Not that well from the reports

quite well from my observations. Limiting people in store at any one time (1 in, 1 out), self checkout only, signage to keep 2m away from others, only 1 person from family permitted, changing opening hours, stickers on floors as to where to stand when queing, staff using gloves, hand sanitizer, reduced staff on the shop floor during opening hours, promoting home delivery.

All true, but ultimately it is the customers touching everything that is the problem.
- Cough on hands, pick up item. Don't like it, put it back.
- Trying on clothes
- sanitising changing rooms
- product returns

ultimately we are trying to stop the virus spreading. This is the end game.

If the experts are to be believed then getting the virus on your hands does not mean you have contracted it. That is why washing hands regularly is effective at stopping and limiting the virus spread. Good old soap and water.

The Red Shed may or may not be guilty of market manipulation but I think it's reasonable of them to consider their food offerings to be akin to a supermarket and as such an "essential service".
Contrast their position with businesses in the primary sector considered an "essential service" and still operating. They're picking and packing apples, kiwifruit, slaughtering cattle and sheep and not one kilogram of their product is destined for the local market but instead being shipped off to feed the rest of the world.
Consistent - I think not.

Not entirely, plenty of exports have no where to go as their markets are in freefall so demand has slackened dramatically, quite a bit is being diverted to local supply which is good.

Redirecton of product for local consumption is not a condition set by MPI to allow continued operation.

Yes any export stuff is not essential. Really they should be flooding the market with fresh local produce, at much improved prices (For the consumer) if they want to claim essential status.

Personally I believe we need an official register of Essential companies. As this same argument played out in the 2011 Gas outage. All sorts of weird and wonderful entities tried to claim "essential" status.

The danger would be people wanting to window shop other stuff, I guess...

The Warehouse = a glorified $2 shop

I'd love to have been a fly on the wall when the Warehouse comms team met with Nick Grayston...

It'd be a classic David Brent moment....
Comms team 'what were you thinking Nick?!'
Nick Grayson 'look it doesn't matter, me and the leadership team were just pumping the share price to dump our own shareholdings at a higher rate, we did really well, have you sold yours too?'
Comms team 'WTF NICK!'
Nick Grayson 'This place is going under, whatd do you expect me to do, care about anyone but myself? Now get out and don't touch the artwork in the foyer or the leather couches, theyr'e all mine!'
Thats what it would have been like.

I think Mr Grayson and his band of opportunists might be facing some legal retribution for their actions, be interesting to see if any of the leadership team dumped their shares during that big price spike....does NZX have any comments on that?

They would likely to have make an announcement if execs bought or sold shares at any time, I believe.

Like the Warehouse, Fletchers also announced yesterday no dividend, failed sale of one business and share buyback scheme on hold.

Look at The Warehouse Wikipedia page. From 2000 onwards a business case study in what not to do.
A company of that size with the employee's and resources they had available could have converted at least one of their Auckland stores into a passably functioning supermarket between Saturday and Wednesday.
But they just thought they would try and call in a favour at MBIE instead. They just couldn't see which way the wind was blowing. And the giver of the favour was not high enough on the totem pole to make it stick once the backlash started.