The three companies,with the same directors and shareholder, are Vivier and Company Ltd, Vivier Capital Ltd and Vivier Investments Ltd.

A financial services firm, Vivier and Company says it offers current accounts, online savings ‎accounts, debit cards, international money transfers and escrow accounts. Its website touts deposit rates in a range of currencies including the New Zealand dollar that in some cases are north of 6%.

Andrews was jailed in 2008 for defrauding Britain's Inland Revenue out of more than £50 million. After he served his time a 2015 Irish TV report by the RTÉ Investigations Unit linked Vivier to tax fraud, money laundering, and Andrews. Asked about the report by interest.co.nz in 2015, Vivier and Company's then-CEO, Luigi Wewege, claimed the programme contained "untrue and defamatory allegations."

Interest.co.nz last year reported on a series of Vivier-related emails obtained on an unsolicited basis, with some to and from Andrews featuring him making requests and giving instructions. Asked a series of questions last year via email, including who Vivier's beneficial owner was, Andrews didn't respond directly, only saying: "Your information is incorrect."

After receiving additional information about the Vivier companies, Interest.co.nz last week asked a Ministry of Business, Innovation & Employment (MBIE) spokesman whether the Companies Office, which comes under the MBIE umbrella, is aware of any links between the Vivier companies and Andrews/Leaf, and if so what they are.

"The Integrity and Enforcement Team (IET) has recently been made aware of links between the above companies and Ian Leaf. This information is currently being reviewed in accordance with IET’s enforcement policy," the MBIE spokesman said.

"IET’s review of information regarding links between the Vivier companies and Ian Leaf remains ongoing. In line with our other investigations, MBIE does not comment on the status of IET investigations while they are under way because this could prejudice those investigations."

The shareholder is a golf pro

According to a Vivier Group LinkedIn page, Vivier and Company, Vivier Capital and Vivier Investments are part of a multinational financial services group of companies, providing products worldwide through representation in jurisdictions across Africa, Asia, Oceania, Europe and South America.

Companies Office records list Allan John Court of Dunedin and Martin Haschka of Klostreneuburg, Austria as directors of Vivier and Company, Vivier Capital and Vivier Investments. Court is listed as sole shareholder. A LinkedIn page, which says he's in Romania, plus a press release, say Haschka is Vivier's CEO.

Court is golf pro at Dunedin's Chisholm Links golf course. Companies Office records list the registered office and address for service of the three Vivier companies as 16 Tahuna Road, Tainui, Dunedin, which is the same address as the golf course.

When contacted by interest.co.nz by phone, Court said this was his business address. He said he'd had no contact with Andrews, and had not heard from MBIE about alleged links between Andrews and the Vivier companies. Court said he was not the beneficial owner of the companies but declined to say who his contact at Vivier was. Information about company beneficial ownership is not collected by the Companies Office.

Court did, however, provide an email address for Interest.co.nz to send additional questions to, which he said he would forward to Vivier. In his response Court said: "There must also be a mistake if you thought I said that I am not their beneficial owner/shareholder. I clearly am."

Andrews and Haschka haven't responded to requests for comment.

Off the Financial Service Providers' Register

After a court battle the Financial Markets Authority (FMA) succeeded in having Vivier and Company removed from New Zealand's Financial Service Providers' Register (FSPR) in 2016. The FSPR is like a phone directory of NZ financial service providers.

Aside from limited exemptions, everyone in NZ in the business of providing a financial service, whether here or overseas, must be registered on the FSPR before they can legally provide financial services. Registration on the FSPR doesn't, however, mean an entity is actually regulated by NZ authorities, which has led to exploitation and confusion overseas .(See more on this here).

"Part of the removal process involves providing public notice of the Registrar’s intention to remove the three companies from the Register and on 16 July 2020 this was published in the New Zealand Gazette. Only after the intended notice was sent to the Gazette for publication did the director of Vivier and Company, Vivier Investments and Vivier Capital satisfy the Registrar’s requirements, as set out in the 26 May 2020 letters. On 17 July 2020 the Registrar ceased removal action of the three companies and notified the director," the MBIE spokesman said.

Section 365 of the Companies Act relates to the Registrar's powers of inspection, with (c) requiring a person, including a person carrying on the business of banking, to produce for inspection relevant documents within that person’s possession or control. Section 318 covers grounds for removal from the Register.

In his email Court said the notices of intention to remove the Vivier companies were posted in error.

"After I provided some required information, [they] were cancelled a few hours later," said Court.

Interest.co.nz also put questions about the Vivier companies to the FMA and Serious Fraud Office (SFO).

An FMA spokesman said: "The FMA generally does not comment on investigations, but we can confirm we do not have any open investigations into Vivier and Company or related persons. The FMA has assessed complaints against Vivier but has not found grounds to proceed further."

And an SFO spokesman said the SFO has received three complaints in relation to Vivier entities, but won't comment further.

The golf course became the Vivier companies' registered office on April 30 and its address for service on July 22. Previously a Regus serviced office facility in central Auckland was used. Court became the shareholder on April 30 replacing Edward Goncalves. Court was appointed a director on January 28. Haschka was appointed director on January 10. All NZ registered companies must have at least one NZ or Australian resident director. A previous director, Leonardo Esteban Rodriguez Fuentes, who provided the Companies Office with a Madrid address, resigned on December 13 last year.

None of the three Vivier companies are reporting entities under NZ's Anti-Money Laundering and Countering Financing of Terrorism Act, meaning they are not supervised for compliance with the Act by NZ authorities.

Some colourful characters have been associated with Vivier and Company in the past. Wewege, who featured in media coverage of then-Auckland Mayor Len Brown's affair with Bevan Chuang in 2013, was a director and CEO of Vivier and Company for a period, and is also a former director of Vivier Investments. And Companies Office records show John David Beckett, or Lord Taylor of Warwick, was a Vivier director between September 3 and November 23, 2014. A member of Britain's House of Lords, he was jailed in 2011 for false expense claims, and disbarred in 2012 for "conduct discreditable to a barrister."

The information below featured in an email sent out by Vivier and Company on July 3. 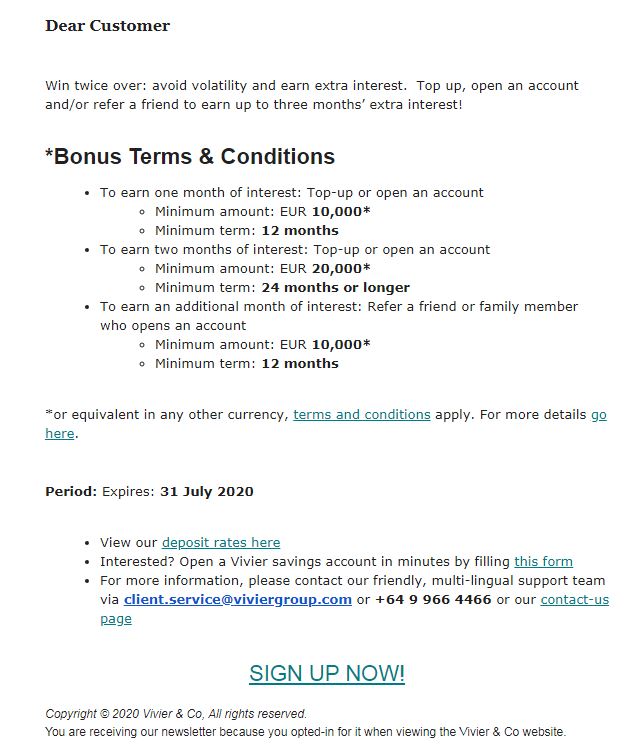 Must be some mistake. I rang the number at the bottom of the article. No reply. If their rates are competitive, I'm in.

For some reason, John Key thought the legal structures and opportunity to to enable this in NZ are fantastic. Watched a doco on the weeked as to how the British dominante the world's money now through ex-colonial tax havens and City Corporation. It is quite shameful how tax evasion and money laudering is essentially class based in terms of the size of the pie. Yes, the little guy can play to some extent. Perhaps John Key with his humble upbringing aspires to the power and grandeur of being seen as enabling as what he sees as 'free enterprise.'

An excellent series of articles Gareth, illustrating, once again, governments tendancy to legislate 'feel good' measures without thinking any particular problem through.
In my view ( apart from my opinion that the FMA is becoming just another large bureaucracy feeding off "user fees" which in fact are just more taxes, albeit somewhat targetted) the FSPR is another example of perhaps well intended regulation which is dangerous rather than helpful. Firstly the use of "government approved" labels by crooks to lend respectability to their actions,...in much the same way terrorists don police, doctors, or firemen uniforms reassure potential victoms that 'all is right'.
Secondly the FSPR is yet anotger example of NZers distressing belief that "Mummy Gummit" will...'make everything better'...ie a substitute for personal responsibility and sensible and prudent investment decisions.
Of course nit to say that some regulation is not needed, just that, as Gareth has explained, superficial legislation is almost worse, in some circumstances, than no regulation. NZ governments, of all shades, are far too fast to apply sticking plasters to complex problems.