ANZ economists say firms are increasingly pessimistic about the outlook for activity and profitability; cost and inflation pressures remain high; profit expectations have sagged to low levels similar to those seen after the GFC

Business / news
ANZ economists say firms are increasingly pessimistic about the outlook for activity and profitability; cost and inflation pressures remain high; profit expectations have sagged to low levels similar to those seen after the GFC 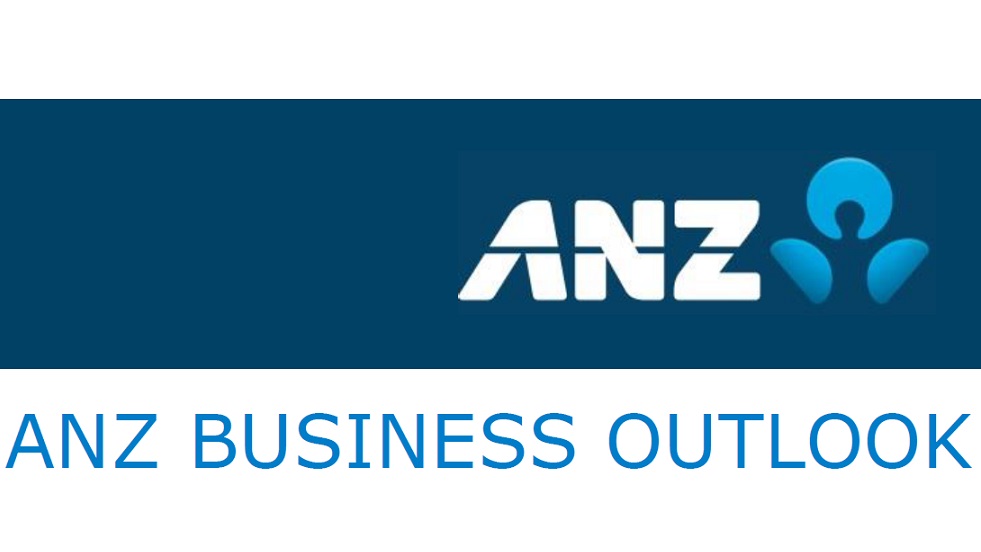 Overall business confidence has dropped to near record lows, while cost and inflation pressures remain extreme, but profit expectations are flagging badly.

Expectations for residential construction continue to fall - hitting a record low apart from during lockdown - "with very low levels suggesting a potential sudden stop ahead".

Those are the main points from the June ANZ Business Outlook survey, which paints an extremely glum picture of NZ Inc.

"Business confidence fell 7 points to -63% in June, while expected own activity fell 4 points to a net 9% expecting lower activity ahead. 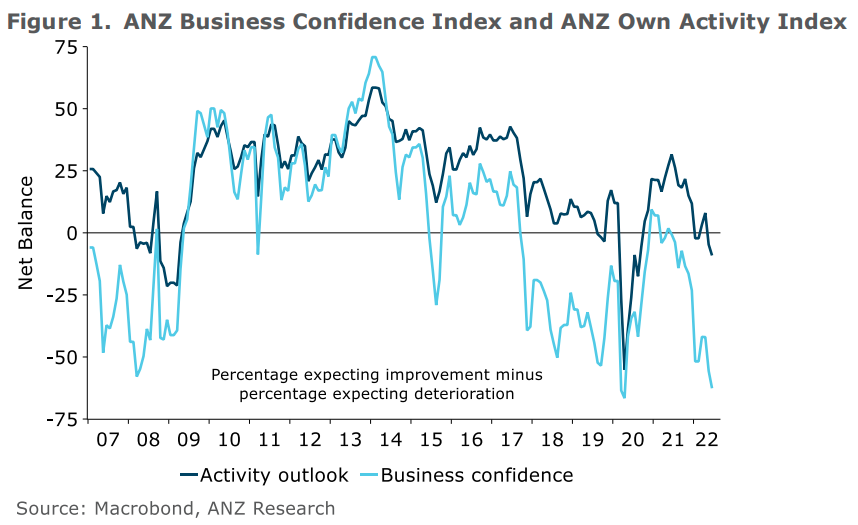 “The suite of activity indicators were weaker across the board. Expected profitability is particularly dire,” she said.

“Employment intentions are holding up pretty well, but with the profitability outlook so pessimistic, one does wonder for how long this can remain the case." 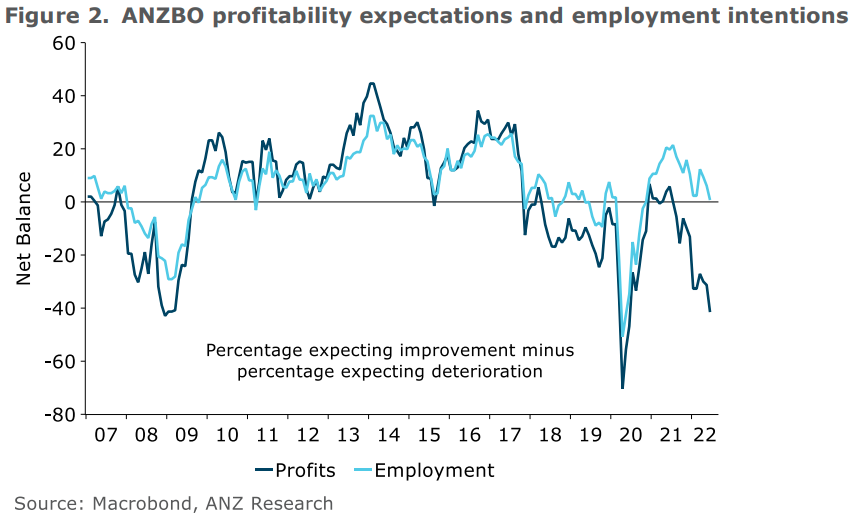 Zollner said it made sense that the expected outlook is slipping, "with the RBNZ [Reserve Bank] on the inflation-fighting warpath, determined to cool the economy".

“For now, supply-side issues are firms’ biggest problems: finding skilled labour, costs, and wages being the top three. The RBNZ needs those problems to ease, and weakening demand to move up the charts. That’s what’s required to bring inflation pressure down.

“Of course, weaker demand might ease the overtime, but it’s unlikely to enhance profitability. That moment of happy equilibrium between demand and supply may prove fleeting, with the RBNZ entirely willing to incur the risk of a hard landing to ensure the long-term structural health of the economy in terms of well-anchored inflation expectations.” 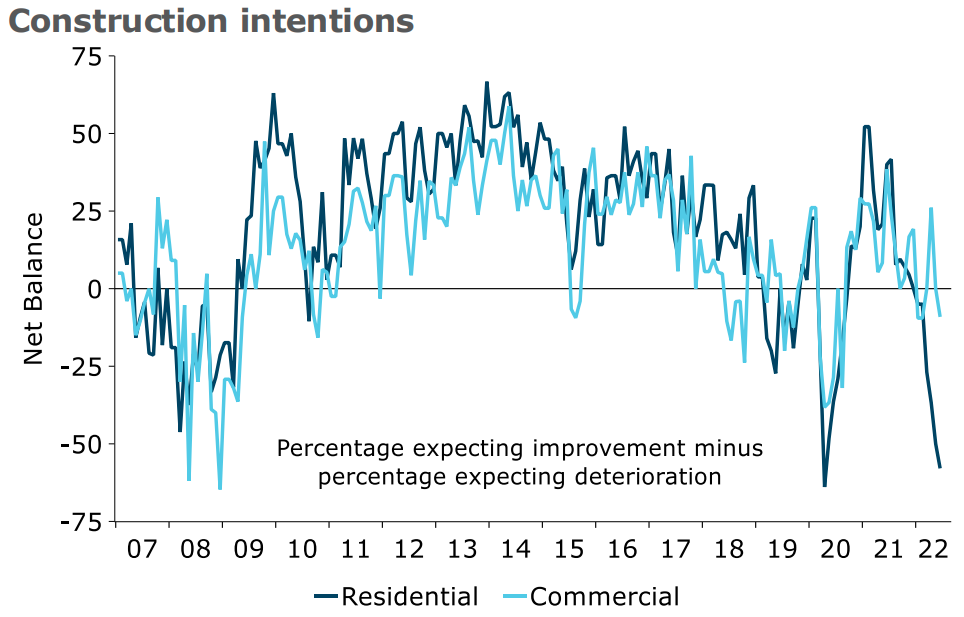 Zollner said "supply-side issues" continue to dominate the list of firms’ biggest problems, consistent with inflation pressures that are still intense. The main reason firms are so pessimistic on the outlook for profitability is not lack of demand, but rather supply-side constraints and cost pressures.

“Finding skilled labour remains the #1 problem for firms, while non-wage cost inflation and high rates of pay continue to grow as problems.  And in the “other” category, 63% of the text comments related to supply chain problems.

“Traditional recession-type problems such as cashflow/debtors and low turnover remain well down the list, but interest rates are now warranting more of a mention, unsurprisingly.

“In such a supply-constrained environment, it makes sense that inflation pressures are holding up even as the activity outlook slows. The RBNZ is unlikely to conclude it can slow the pace of hikes any time soon. While pricing intentions, cost expectations and inflation expectations are all slightly off their peaks, the RBNZ will be looking for meaningful declines.

“On the wage front, upward pressure is accelerating outside of the agriculture sector as regards both past and expected future wage settlements. And while agricultural wage pressure is easing, it’s still the highest across the economy. This data will do nothing to ease RBNZ concerns about the potential for a wage-price spiral developing.

“On the investment front, for firms intending to invest more, the key factors are skilled labour shortages, the domestic economic outlook, the level of spare capacity, and central government policy, in that order.

“Amongst firms intending to cut their investment, the biggest factors are the domestic economic outlook, interest rates (rapidly growing in importance), skilled labour shortages (no point in buying that fancy machine if you can’t hire an operator), central government policy and the global economic outlook, in that order." 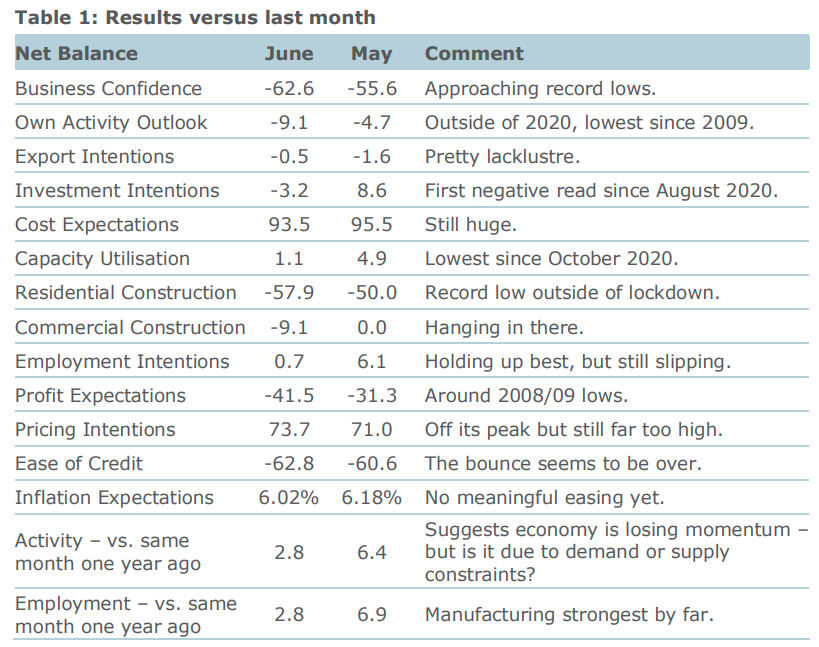 People will recall I have been saying since at least mid 2021 that residential construction would start slumping from the second half of 2022, so absolutely nothing revelatory about this.

Yes, and you weren’t the only one.

Wasn't our mate Tony going on about this too?

At this point housemouse needs their own page of "I told you so" predictions.

Yes, from about February this year. He was the first economist to start mentioning it as an emerging issue...

Actually, hardly anyone was talking about this until early this year. I mentioned it numerous times last year, hardly anyone seemed interested in my comments.

Unless you can show me otherwise? Were you talking about it last year?

Not that it's rocket science, it was so obvious it was going to happen. But as far as I can recall, almost no one was taking about it until early this year.

People should have been talking about it and planning for it in the middle of 2021 or earlier.

Now all the media outlets are covering it, almost as if it's come from out of the blue.

Such a dumb ass country much of the time.

you just need to look at everyone whos been buying the covid tripe we have been fed.

In 2019 the RBNZ chose to keep dropping rates from 1.75% to 1% while the economy was healthy and times were good. A crisis arrives and they and the central government flush the system with cheap credit and free money with virtually no room to move rates lower. Now the RBNZ have to nuke the economy. The inbound deflationary depression on the other side of this stagflation phase will be remembered for generations to come. Only the silent generation have lived through what is about to unfold.

It always annoys me that we have over 300,000 working age on so-called benefits when we can't find enough skilled labour, the first skill needed being to turn up. And again tomorrow. And the day after that. And next week as well. Your skills are developed each & every day by just turning up to work. Not that hard, is it?

NZ in the 21st Century: Too many fat & lazy people.

Not to mention over 50% of our welfare benefit budget going to those who've passed a rather arbitrary age and could actually be productively employed. A much larger proportion.

Banks blew up this enormous housing bubble, they should be nationalized as a consequence. Banks should never ever be anything other than publicly owned. The public should enjoy the benefits of the economy, not the banks who encouraged an enormous housing bubble and drink the blood of the productive for loans of money that they simply invent on their books.

Any that need to be bailed out should definitely be nationalised in exchange.

Given the Aussie banks collectively profit $5b+ per year, with extremely low shareholder capital, surely there's sufficient profits that can be set aside as "retained earnings" so a bail out shouldn't be required.

Oh wait, LOL, they won't need bailing out they will just leave NZ to clean up the lifeless carcass.  Fairweather friends will stick around while there is still money to be made, but once the revenue streams reverse they'll walk away leaving their 8 cents in the dollar as a token gesture.

In the scheme of things, there's actually no valid case for bank debt to be issued for anything that's not commercial, and with a far higher risk premium than should be available to an owner-occupier directly boot strapped via some some form of government backed SOE mortgage holder.

They should also be precluded from the insurance business, but that'll never happen either because 'free market'.

Trying to recall if there was some financial crisis going on back in those times...maybe just a small one...?

It's the opposite - consultancies are excited by (nominally) right leaning governments because ministries have hiring freezes.

As a consultant, I can confirm we are excited by both.

It doesn't matter what team is in when both sides try to out-do each other on headcount freezes coming up to an election and (in general) Govt is a price setter for the contracting market.

The mahi still needs to get done, and it's easier for them to hire an expense than a human.

We seem to have bigger booms under Labour than under the Nats though.