BNZ has bolstered its provisions for bad and doubtful debts due to the weaker and volatile outlook for the dairy sector.

BNZ's parent, National Australia Bank, said its New Zealand banking operations posted cash earnings of $405 million for the six months to September 30, a drop of $13 million, or 3.1%, from $418 million in the six months to March 31, the first-half of its financial year. The bank's charge to provide for bad and doubtful debts surged $42 million, or 91.3%, to $88 million. The rise was attributed to an increase in collective provision charges, mainly due to the outlook for the dairy industry.

'The quality of the book is very strong'

"I think we've been quite conservative because the credit metrics in our book are very strong, the gross impaired and 90 days plus to gross lending assets are sitting at 37 basis points so the quality of the book is very strong. We've reviewed the top 200 exposures in the book and no specific provisions have come out of that," says Healy.

"The (dairy) book's in really good shape. But because we've moved to IFRS 9 (unlike other banks) it requires us in effect to take a through the (economic) cycle view in collectives, or our economic cycle adjustment, and we think we've taken a very conservative view through the cycle," says Healy.

"Asset quality in our agri and dairy book remains extremely sound. We are well placed to continue supporting our farming customers through a more volatile trading period," says Healy.

For the year to September, cash earnings from NAB's NZ banking operations rose $16 million, or 2%, to $823 million. Loans at least 90 days past due plus gross impaired assets dropped to 0.61% of gross loans at September 30 this year from 0.77% six months earlier.

(The chart below comes from NAB's investor presentation. EAD stands for exposure at default & DPD stands for days past due). 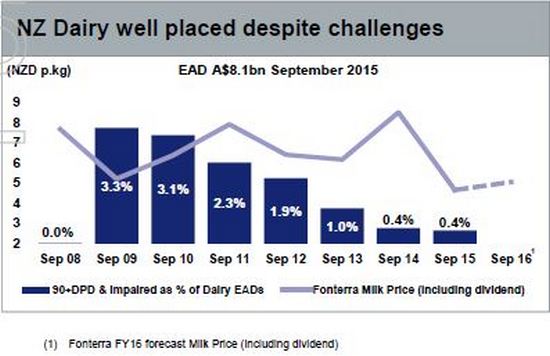 According to NAB figures, BNZ lost marketshare in all of housing lending, credit cards, agribusiness, business lending and retail deposits during the year to September 30.

BNZ paid NAB dividends of $345 million during the September year, down from $420 million the previous year.

Cash earnings down, profit up. Margins up. Agri has hardly moved? All that suggests is the BNZ has been busy rolling/ refinancing Agri loans.