ANZ New Zealand has posted a 14% rise in half-year profit with operating income up and operating expenses down.

Across the bank's individual business units institutional was the standout performer, with half-year profit surging 108% to $198 million. Profit at ANZ NZ's retail banking unit rose 8% to $499 million, profit at the businesses unit grew 2% to $717 million, and profit at the commercial unit dropped 2% to $219 million.

"All our business units performed well in this half due to our continued simplification of the business," ANZ NZ CEO David Hisco said.

"We've boosted our focus on digital innovation which has positioned us well for a period of rapid change in banking."

The only NZ bank offering customers ApplePay, Hisco says this has been taken up by "thousands of Kiwis." 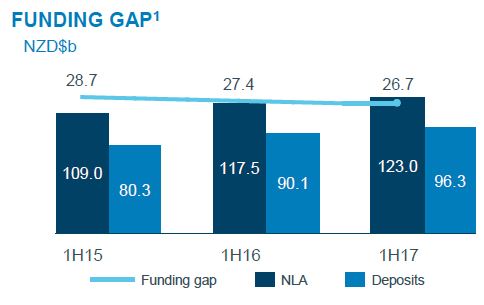 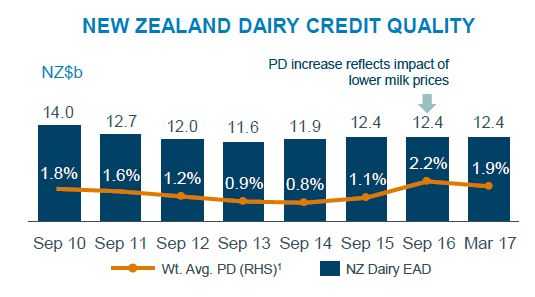 Meanwhile, Australian parent the ANZ Banking Group posted a 23% rise in half-year cash profit to A$3.4 billion. It also reported a 130 basis points increase in return on equity to 12.5%, and will pay an unchanged, fully franked interim dividend of A80 cents per share, equivalent to 69% of the group's cash profit.

Group CEO Shayne Elliott said ANZ is adopting the "scaled agile approach to organising and delivering work" in its Australian division. This Elliott says, will enable ANZ to respond more quickly to changing customer expectations, engage and empower staff, and improve efficiency including through some job cuts.

"Scaled agile is a proven approach for running businesses based on small, autonomous, multi-disciplinary teams. It is used by leading digital companies such as Spotify and Google and in large financial services companies such as ING and ABN AMRO," Elliott said.

In the digital age, customer expectations are being redefined by their experiences with businesses like Amazon and Apple. We need to break with some of the traditional 20th century approaches to organising and working to ensure we are more responsive to 21st century customer expectations."

The plan is to also take the scaled agile, less hierarchical approach to other parts of the ANZ group, including NZ, after launching it next year.

The ANZ group released the figures below for its NZ division.

And here's the group discussion pack.

ANZ New Zealand has posted a 14% rise in half-year profit with operating income up and operating expenses down.

That's a bit more than CPI inflation and general wage growth. I guess the RBNZ will be grateful for small mercies.

Long time reader, first time commenter, if that's a word!
So I looked through the report and googled and I may be missing something but how much tax did they pay? Making a lot of profit is one thing but as long as they pay tax I'm unsure if I care how much profit they make, can anyone enlighten me?

You do know that you too can become a shareholder of ANZ, right?
Out of curiosity, who do you bank with?

I both bank with the ANZ and I am a former shareholder , and I had an investment with one of their ANZ Funds in Sydney which I transferred to Kiwisaver in 2008 .

In the light of this and the housing/debt bubble the RBNZshould have a damned hard look at the banks capital requirements you would think. The banks can obviously afford it.

The Americans are getting set for another blow up by the looks:
"American consumers are holding $1 trillion in revolving credit, mostly in credit card debt. So how well is this segment of consumer debt holding up? Synchrony Financial – GE’s spin-off that issues credit cards for Walmart and Amazon – disclosed on Friday that, despite assurances to the contrary just three months ago, net charge-off would rise to at least 5% this year. Its shares plunged 16% and are down 27% year-to-date. Credit-card specialist Capital One disclosed in its Q1 earnings report last week that provisions for credit losses rose to $2 billion, with net charge-offs jumping 28% year-over-year to $1.5 billion.

Synchrony, Capital One, and Discover – a gauge of how well over-indebted consumers are managing to hang on – have together increased their Q1 provisions for bad loans by 36% year-over-year. So this is happening. Other worries about consumer debt in the US are piling up. The $1.4 trillion in student loans are already in crisis, though the government backs them, and they cannot be charged off in bankruptcy. Mortgage debt is still hanging in there, given the surge in home prices that make defaults unlikely. But of the $1.1 trillion in auto loans, subprime loans packaged into asset backed securities are getting crushed by net charge-off rates that are worse than during the Financial Crisis"
https://www.theautomaticearth.com/2017/05/debt-rattle-may-1-2017/
PS, some really interesting stuff there in todays issue of TAE

not just aussie shareholders plenty of kiwis hold shares as well, gift that keeps on giving

its a gift that keeps undermining its own base.
We are reaching a point where the masses cant afford to stay in the system ... which breaks the whole system.

Phew, good to hear the banks profits are up so much in times of rising interest rates. Hopefully they can keep screwing the customers to make even bigger increases in the next half

So, you'd rather we had poorly performing financial institutions?

My comment was tongue in cheek Nymad, however you must admit (or possibly not) that the scale of overall profit and size of increase of profit is somewhat grating considering the additional charges being put on customers of late.

It doesn't worry me, at all.
No business should be embarrassed by the level of positive profit that they make.

But banks arent any ordinary business. Their profits now reflect a system relying on consuming newly issued debt. A ponzi
If you took the time to think you might ask yourself why interest rates have tracked ever lower for 30 years and what this says about the viability of insurance & pension funds.
Then you might start to worry.

If you took the time to think, you might realise that such a question is pretty arbitrary given the structural changes we have had in the economy and macroeconomic policy over those 30 years.
Sure, you can look at trends pre inflation targeting. You can look at trends post inflation targeting and pre 2008, and trends post 2008.
But it's a bit stupid to imply that we look at them over 30 years and draw one big arbitrary conclusion that interest rates have trended downwards.

If we chop up the periods as mentioned above, the downward trend you mention is non existent...

"t's a bit stupid to imply that we look at them over 30 years and draw one big arbitrary conclusion that interest rates have trended downwards.."

looks pretty down to me

You miss the point.
Again.

If you took the time to verify that statement, you might have found this...

The slide has been quite remarkable......in Fact.

Haha.
You people are so silly.

Ham n eggs - who are they forcing this new issued debt upon, please not poor innocent kiwis who are desperately not wanting it ?

Grant A - debt MUST grow ... this is how the financial system works. So someone somewhere needs to take on more debt - China picked up the slack after 2008 especially but they are having trouble now issuing debt to service old debt etc . What we will (& are seeing) now is governments running ever greater deficits to fund so called "infrastructure" projects ... to try and keep new debt ticking over. But the reality is we are just laying ever greater burden on the future. At the same time we need ever lower interest rates to keep debt serviceable, but this sends pension funds to the wall as yields fall through the floor.... promises, promises which at some point we cant keep (unless real wages can keep up.. & theyre not).
Another point is that adding more debt helps commodity prices to stay up ... so if we cant do so commodity prices track lower ... & we are seeing this as Oil just cant get up to a price which encourages investment. It looks like a glut as companies keep producing to service existing debt, but it hides a coming shortage.
Problem.

Maybe not Nymad but they should be deeply embarrassed about their half arse internet banking service, how many hours (minutes?) profit would it take to upgrade their servers?
I've been trying to pay an account, the whole thing is hopelessly overloaded and keeps timing out which means a new log in and re-enter all the details. No warning or apology either. Maybe changing banks is less of a hassle than having to put up with ANZ's "service".

I do agree on that.

If you are unhappy, change bank.

I did allude to that. Very tempting.
I read somewhere, probably still applies, that people are more likely to get divorced than change banks. I did it once (changed banks that is, BNZ to ANZ) I was being very badly treated I felt with some outrageous charge for some non job - extending a loan facility or something. Still with the same lovely lady though.

Westpac changed their online banking setup a little while ago and I have to say it's pretty good. They have even kept a link back to the old setup if you don't like the new one..
However they're not so good in other areas. I'm trying to get some information about a charge on my foreign $ account; no one wants to know..

Westpacs new online banking is appalling to use. What used to be one step is now three steps. And packed with decoration. I'm sticking with it but it ain't getting easier. The old one only used one page for what you needed to do. It just used typeface. Visually quite boring but I don't do internet banking to be amused. I do it to get the job done and be off elsewhere.

... whilst one in four households in their customer base are in financial distress with an average DTI ratio of 188%.

I do wonder what economic historians will have to say about this in 100 years time.

ANZ branch in NZ known around Australia as
THE GIFT THAT JUST KEEPS GIVING.

Wish my business could increase profits by 23 percent!!!wow there killing it

I see a return on asset figure but what is the return on equity?

I see ANZ report RoE of 11.8% for the half year, so I assume it is on track for a return on equity greater than 22% for the full year.
On top of that, assets grew about 2.5% for the half year.
With a Beta of 1.4 or so the cost of equity can be no more than 12% so they are earning way above a fair return.
Our regulators call this a healthy banking sector.

I know , its a really good performance by ANZ who gets an ROE of over 20% these days