The FMA issues warnings about NZ's troublesome Financial Service Providers Register in Chinese, Malay and Arabic & admits it's easier to get on it than be removed from it

Business
The FMA issues warnings about NZ's troublesome Financial Service Providers Register in Chinese, Malay and Arabic & admits it's easier to get on it than be removed from it 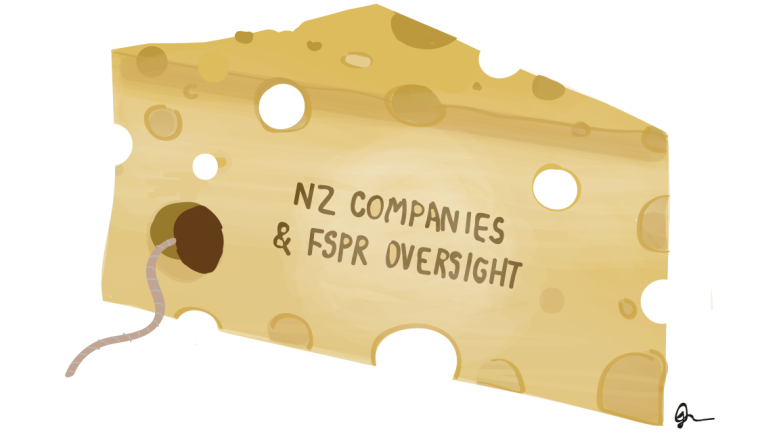 The Financial Markets Authority (FMA) acknowledges getting on New Zealand's problematic Financial Service Providers Register (FSPR) is easier than being removed from it, as it begins publishing warnings about dodgy NZ registered entities in Chinese, Malay and Arabic.

FMA director of regulation Liam Mason told interest.co.nz it's "much easier" to get on the FSPR than be removed from it. He was speaking as the FMA issued a report on the FSPR in which the regulator says its focus is shifting to targeting New Zealand directors of FSPR registered businesses that encourage or facilitate misuse of the FSPR, rather than simply having the offending companies deregistered from the FSPR.

Additionally the FMA can have a company deregistered from the FSPR, by its Registrar Ross van der Schyff, if it believes registration of the company is likely to give a misleading impression of the extent it's regulated in NZ, or if it's likely to damage the integrity of the NZ financial markets.

Trouble is the FSPR is open to exploitation by overseas based rogues and crooks. That’s because a company can register on the FSPR if it has a place of business in NZ, regardless of where in the world its financial services are targeted or provided. This means entities can, and do, set up superficial operations in NZ through virtual offices, or by leasing an office and perhaps employing a person to provide back-office services.

These firms register to provide financial services that don't require licensing in NZ, such as foreign exchange, or forex, services. There's no pre-vetting by a NZ regulator, and they don't offer financial services within NZ. These entities can, however, use their NZ registration overseas to give a false impression that they are regulated in NZ and trade off this country's good name. We've written numerous articles about these FSPR issues over the past few years, which can be found here. And there's detailed background on the FSPR in this story.

I reported in March that the FMA had received enquiries about NZ financial service providers from 83 countries, with 340 misconduct reports received from overseas about companies registered on the FSPR. Alongside its new report on the FSPR, the FMA is publishing online resources about the FSPR for consumers in Chinese, Malay and Arabic (see picture below). These languages were chosen to reflect the regions of the world representing the biggest number of complaints received by the FMA.

The report, covering the three years to June 2017, notes;

The FMA also says in its report that complaints received about companies on the FSPR often feature similar themes. These are;

• Companies not acting on customer requests to withdraw funds, or delaying repayment of money held in a customer’s trading account. This accounts for almost half of all complaints we receive each year.
• Traders changing customers’ positions/removing profit balances without authority or notice.
• Companies offering a bonus amount to start trading, and then refusing to pay out profits.
• Disputes about whether trades were/should have been activated or not.

Mason says there's a limit to the amount of confidence people should take from FSPR registration.

"The FSPR was put in place to meet FATF [global anti-money laundering overseer the Financial Action Task Force] requirements, and also to ensure that financial service providers were members of dispute resolution schemes. That was all done in the era prior to the FMC [Financial Markets Conduct Act] legislation, [establishing] the licensing we now have for a large number of firms."

"It [the FSPR] had good purpose when it came in [but] what we are dealing with is the unintended consequences that come with it," says Mason.

I've previously argued that the Government should lance the boil that is the FSPR. And Mason's boss, FMA CEO Rob Everett, last year told me he would like to see the FSPR scrapped. However the Government, led by the Ministry of Business, Innovation & Employment (MBIE) is instead proposing some reforms to the FSPR aimed at making it harder to abuse it.

"The changes that are being proposed to the [FSP] Register in the [the Financial Services Legislation Amendment] Bill that's in front of Parliament at the moment, we hope that they will require a much stronger linkage with New Zealand financial services than is the case at the moment. Because otherwise it [the FSPR] is going to be something that continues to occupy a great deal of our time," says Mason.

Directors in sights, even Aussie ones

"We've got an agreement with ASIC [the Australian Securities and Investments Commission], as well as both being members of a multi-lateral agreement on enforcement and information sharing. And that allows us to provide information to assist ASIC and we've done so. We've referred cases to ASIC where they've arisen under the FSPR," says Mason.

"The regime for directors duties in Australia is rather stricter and has stronger enforcement tools than ours. So if I were looking to go somewhere soft, that wouldn't be my first choice."

Asked if ASIC would take action against someone in Australia who is a director of a NZ company he says; "Very often there are other connections in Australia that they can assist with and they've certainly been willing to help us on cooperation matters in the past."

"What we are signalling with this report is that we're going to start specifically taking action against directors from now on. So we haven't in the past been focusing on action against the directors, we've been focused on the deregistration of the companies themselves," Mason says.

"It's a more personal touch. We think we've made a difference definitely with the work on deregistration, but it would be fair to say that the cases that are left are becoming more complex and they [companies]  are investing more in getting onto the FSPR."

Asked if any action against directors is underway Mason says; "We are looking at some companies right now, yes. But there's no action being taken yet."

What about ex-FSPR entities that are able to remain registered as NZ companies?

Another issue interest.co.nz has written about is when a company is deregistered from the FSPR because it's deemed to be giving a false or misleading impression about the extent to which it is regulated in NZ, but is allowed to remain as a registered NZ company.

Asked if this is a problem from the FMA's perspective, Mason says it's a fair point. MBIE's Companies Office rather than the FMA has oversight of company registration.

The FSPR gives a "much sharper impression of regulatory coverage", and "people are getting sucked into that. And I don't think people take that from simple company registration."

Interest.co.nz recently reported on eight NZ registered companies, that aren't and never have been registered on the FSPR, who were named in what's alleged to be a US$2.9 billion international money laundering operation known as the Azerbaijani Laundromat. 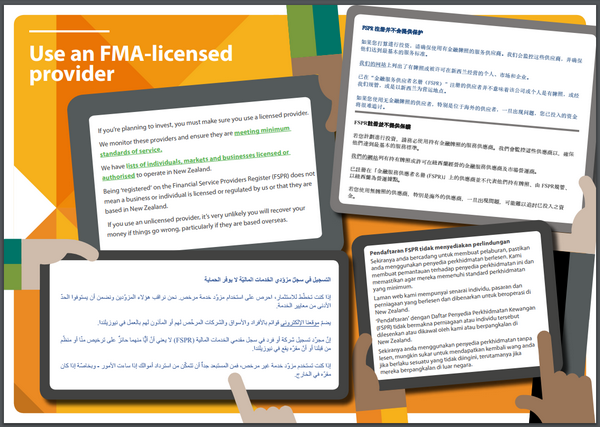 Here's a bigger version of the picture above, and here's a press release from the FMA.

The only long term solution is to require all financial service providers to be licensed - but expand the categories. This approach by the FMA doesn't solve the underlining issues as it is still possible to to be on the FSPR and offer products overseas and not have any licence or be subjected to any regulation except for AML/CFT.
It is good to hear that Rob Everett wants the FSPR abolished but I'm worried after reading what Liam Mason wrote in the press release today. He seems to think that since companies fight to be on the FSPR then the FSPR is valuable.
Unfortunately, this issue is not high on the political radar and the closest we got to any offer of financial reform was from Labour but that was a review of the responsible lending code. An discredited financial system will do far more damage to the economy than a few loan sharks.

Gareth Vaughan:- How long have you been warning about this now?

Quite a few years - nothing changes

FMA:- whoops - that didn't work - try something else - see if that works

It has certainly been an obvious problem since 2011 or 2012. But it has clearly not been a priority for MBIE or the Government.

It was a known risk and pressure was coming on internationally to clean up our act well before that.

What's the problem? Weren't we supposed to become "The Switzerland of The Pacific" and "The World's Back-Office"? That's what John told us we need to become if we were to get anywhere in this globalised economy.....