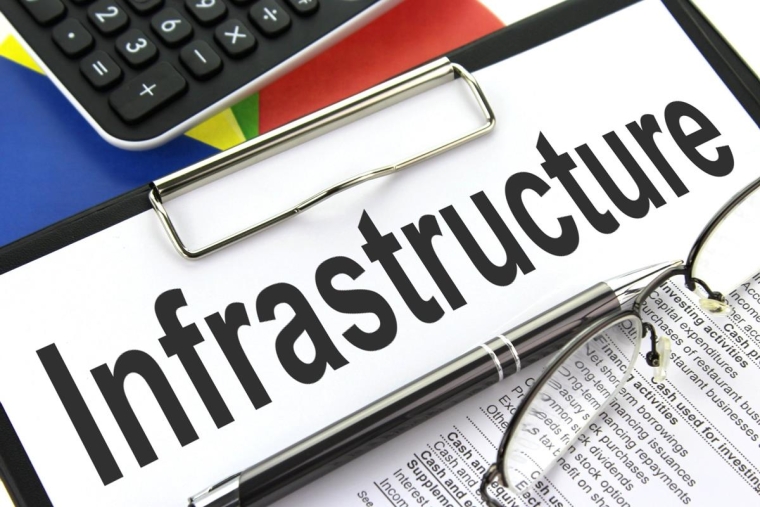 Treasury is calling for submissions on how best the new proposed independent infrastructure body aimed at lifing the quality of infrastructure investment in the country might work.

The formation of the proposed body was announced by Infrastructure Minister Shane Jones in August.

At the time, Jones said the Government needs to do better when it comes to long-term infrastructure funding and he said the new body would provide expert advice, planning and strategy and will support the delivery of major infrastructure projects across the country.

“[It will] act as the golden thread between the various pieces of work this Government is undertaking,” Jones said.

Treasury said a key finding of its review earlier this year of the 'institutional settings' for infrastructure was that that, while institutional arrangements for managing infrastructure investments have been strengthened in recent years, "the system is not consistently delivering good outcomes".

In particular, stakeholders had identified the following weaknesses:

Now Treasury's issued a discussion document and is seeking submissions by October 26.

It's planned for the new body to be set up in the second half of next year. But in the meantime, an 'interim Infrastructure Transactions Unit' will be established within Treasury from 1 November 2018, to provide support to agencies in planning and delivering major infrastructure projects.

Treasury is proposing eight major functions for the new body as highlighted in the below graphic: 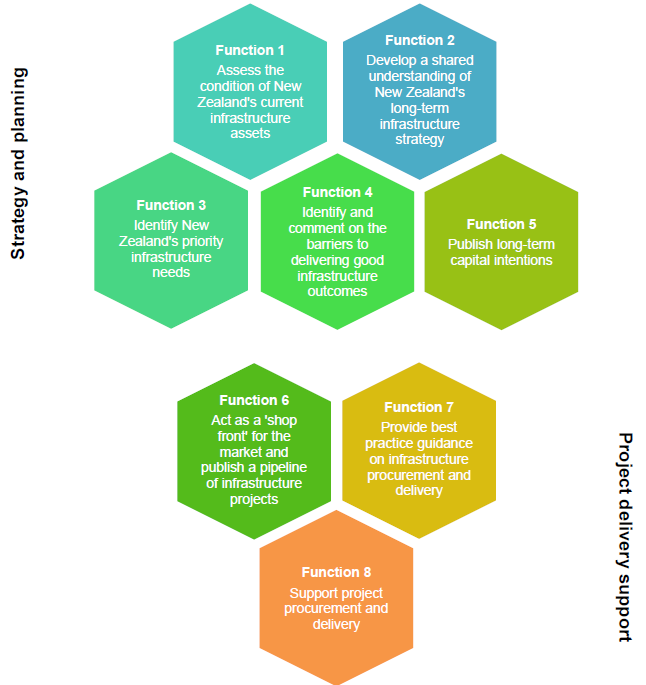 In terms of function 1, Treasury says on the proposed 'stocktake' that in order to understand our infrastructure needs for the future, we first need to understand what we currently have.

In terms of the proposed function 8, Treasury says the independent infrastructure body could support the procurement and delivery of significant infrastructure projects by central and local government, including through providing early assistance with the preparation of business cases for such projects.

"The independent infrastructure body could also provide support though the project delivery phase, including on project governance, and through embedding commercial and procurement expertise into project teams and providing support through the appointment process for key advisors and project personnel. When requested by ministers, the body could also be directly responsible for the procurement and delivery of specified central government infrastructure projects."

Treasury says that the feedback it gets through the consultation process will inform its advice to Government on:

The move to form an independent infrastructure body is being welcomed by the market.

'We need to get better'

"For too long our planning and delivery cycles have been mismatched with periods of rapid growth and slow-downs. Once more we find ourselves in a period of rapid growth with infrastructure failing to keep pace," he said.

"We would hope for an infrastructure body that contributes to integrated procurement and investment decision-making, gives business the confidence to invest in people and equipment, and will result in long-lasting, high quality infrastructure for New Zealand."

Infrastructure NZ chief executive Stephen Selwood said the consultation process had come at an opportune time, with news that a major Chinese company has bid to build and operate the long awaited Penlink project north of Auckland.

"Penlink has sat on the books of both the Transport Agency and various Auckland councils for two decades now, and is planned to sit there another decade before anything happens.

“This is despite the project demonstrating a very strong economic return and the local community indicating they will pay a toll if it means getting the road built.

“Private sector investors and infrastructure companies have seen the opportunity and front-footed a solution, which is exactly what you want to happen when official processes get tied up.

“We have already seen NZ Super bring forward an unsolicited proposal for light rail in Auckland and we are aware of several domestic and international investors looking for opportunities to invest in New Zealand infrastructure projects.

“But it’s not clear in New Zealand who a company with an innovative infrastructure proposal should approach nor how their bid should be managed.

“The result can be frustration, wasted time and reduced competitiveness in the marketplace.

“With the establishment of an independent infrastructure body, the Government will create a market-facing expert entity with expertise in infrastructure procurement and investment planning.

“It will be able to develop, for example, a clear set of guidelines for unsolicited bids, such as that received for Penlink, and advise responsible agencies and ministers on a transparent, fair and efficient process."

The timing ans scope is significant. The article notes that

It's planned for the new body to be set up in the second half of next year.

So this means that it will be recruiting, PR'ing, and maybe even doing some Planning, just in time for the 2020 Election. As a new MoW, it will hoover up a considerable number of employees, most of whom can be expected to be of initially low productivity, so there's a perfect excuse for lack of evident output: 'it's a start-up....' And guess who the Newly Employed and no doubt heavily Unionised Planners are gonna vote for? The hand wot feeds 'em.....

I heard Beca and Opus are in the process of negotiating a "bulk buy" on some brand new ticket clippers.

Yeah good suggestion! Chinese roading gangs coming to NZ! And try the Dutch ones, NZ! New roads will be fixed within reasonable time, unlike the traditional NZ companies, which take ages and ages to complete like the roundabout and stretch of road in Omokoroa! Unbelievable!

1. Assess conditions of existing NZ infrastructure - the current asset owners should already be doing this

3. Identify NZ's priority infrastructure needs - same as 2., unless we are doing to economic & financial analysis on all NZ infrastructure & prioritise it as one list. - Not currently possible given the different funders - taxpayers, ratepayers, motorists etc

4. Identify & comment on barriers to delivering good infrastructure outcomes - the barriers are already well known
a) too higher immigration rates
b) too restrictive RMA land zoning rules
c) no congestion tolls
d) some local government bodies being too population and cant afford the infrastructure
e) some local government bodies spending on non essential items and not doing business cases and prioritsing their spending - central government should legislate this requirement.
f) oligopoly building suppliers

7) Provide best practice guidance on infrastructure procurement & delivery - NTZA already have much of this (standard contract & PPP) + local govern processes as well. There is probably a case to standardize NZ practice given there is only 5m people