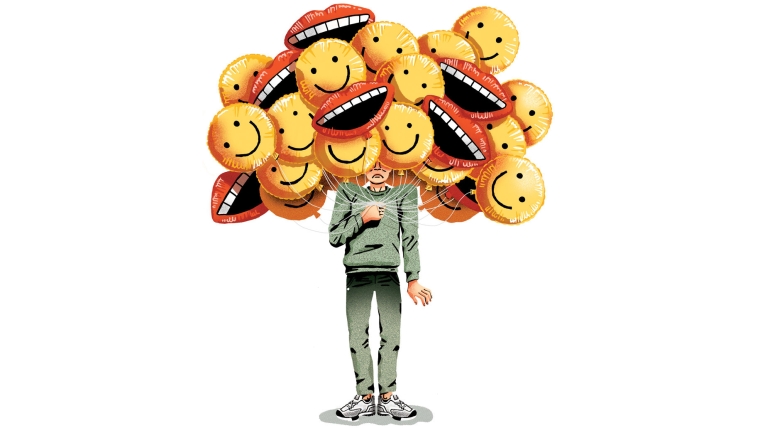 Why 2021 will be stronger for Asian FX

If you had to find an analogy for 2020, it would be fair to say it’s been a dumpster fire. At the beginning of the year there were ruminations that a global recession might be headed our way, but no one was really prepared for what happened next. The worst pandemic in a century enveloped the globe, lockdowns ensued. The rest is history.

In FX markets Asia Pacific currencies were hit hard and early, given the Coronavirus was first recorded in Wuhan, China. Local currencies bore the brunt through the first quarter of the year, as a cautious globe headed back into the safety of the US Dollar, Swiss Franc and Japanese Yen.

But then central banks and governments unloaded the greatest ever fiscal and monetary stimulus effort in history.

If the dumpster was on fire they threw every known fire engine, water helicopter and fire extinguishing chemical onto it, until the fire was put out. What came next in markets was eerily reminiscent of the period from 2009-11 or 2002-04 if you like. And if they are preludes to what lies ahead the reflation journey may have only just begun.

Being one of the first to act it took the Taiwanese Dollar only until early June to get back into black for the year. It looks set to close more than 6% up against the once mighty US Dollar.

The Chinese Yuan, held back by simmering trade wars, took until August to move back into the positive, but it might go one better and close up around 7%.

The Korean Won has been similarly impressive while the Thai Baht and Indian Rupee have been noted underperformers. The COVID situation in India looks like it will see the Rupee close down 3% despite the recent Dollar devaluation. 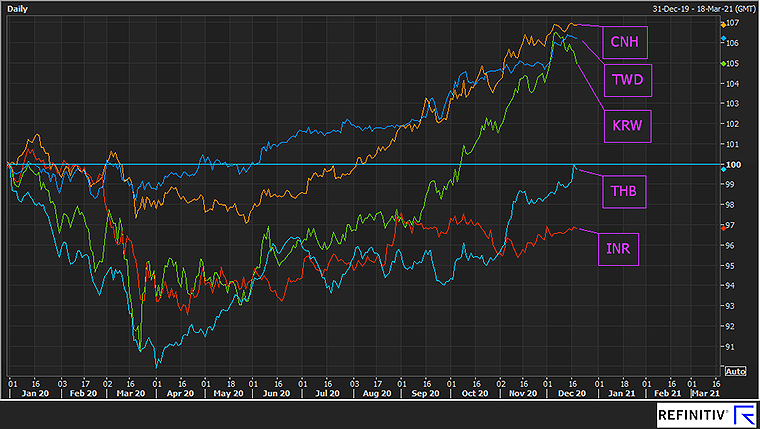 What is key here though is the trend. A combination of surging export demand, vaccine hopes and better returns in emerging markets are making negative real yields in the US rather unattractive. And while ever the US Dollar remains the global currency, then by definition it will be the first to go hard and early, exporting ultra-loose momentary policy to the rest of the globe, and hence by inference perhaps be the first one to consider tightening as well.

And so while we may continue to get interventionist actions from Asian central banks we think an ultra-loose Federal Reserve will continue to boost Asian FX through the first half of 2020.

What about the Kiwi?

Stronger Asian currencies, by inference, also prepare the grounds for a stronger NZD.  Recently there has been a rather direct correlation in better Chinese Yuan purchasing power and better global dairy auctions. That on its own should be NZD supportive.

But above all it is that unprecedented central bank liquidity that looks set to feed the NZD for a while yet. With lower volatility and a stronger global growth outlook, New Zealand’s yield still looks attractive on a global scale. OK it’s like finding a horse with a win in its last five in the first at Alexandra Park on a regular Friday night, but one can only deal the cards that are on the table.

Indeed, as FX analysts our minds are often trained to reaffirm risk in currencies. We always see the bearish case. But suddenly the troubles of the last four years – Trump, Brexit, US/China trade tensions and COVID could be behind us in 2021. Yes, the latter requires a successfully vaccine rollout. but things are suddenly starting to look more positive.

Combine that positive sentiment, with what we know happened under the Fed-fuelled reflations of 2002-04 and 2009-11, and the possibility for an 0.80 cent NZD next year does not seem so absurd.

For what it’s worth we’re not convinced the RBNZ will go negative on rates next year either. In fact if anything we think rates in general may have hit the bottom of the cycle.

Excess liquidity both friend and foe

It was Mark Knopfler who told us not to worry – that “there should be laughter after pain, there should be sunshine after rain, these things have always been the same, so why worry now?”. And while that sentiment is undoubtedly the case as head into 2021, we might find the inverse applies midway through 2021, ironically when global growth improves.

Buoyant Asia-Pacific currencies undoubtedly loom as the largest FX beneficiaries of the expansive global stimulus programme, from both governments and central banks alike. Modern monetary theorists will tell us that as creators of money central banks can simply keep the ball rolling, but we don’t think the populace are ready for such foils so keep an eye on moves towards policy normalization next year.

Indeed, excess liquidity is the Kiwi’s best friend right now but sometime in 2021 it’s likely to become its biggest risk.

And you could probably add a number of asset classes into that statement as well.

So enjoy your time at the beach or bach these holidays. 2021 should start more positively. We’ll try to keep the pinot glass half full as we look into this time next year, even if later in the evening it seems more half empty, or ready for something stronger to see us through.

I'm looking at continued rantings as trumpty DUMBty becomes more delusional and incoherent than before, weakening the $US in Favor of $NZ even in the short term 30 days before administration transfer, as trump goes more maniacal and undermines global reliance on the $US???

Trump and his supporters live in a fact-free alternate reality. While Trump's supporters are just laughable, Trump still retains Presidential powers for almost a month. These last days are going to be dangerous, with this erratic and increasingly desperate "King Lear in a crumbling Twitter kingdom" (as fittingly described by a US reporter), bent on exploring even the most radical and extreme options in order to cling to power, democracy or not.