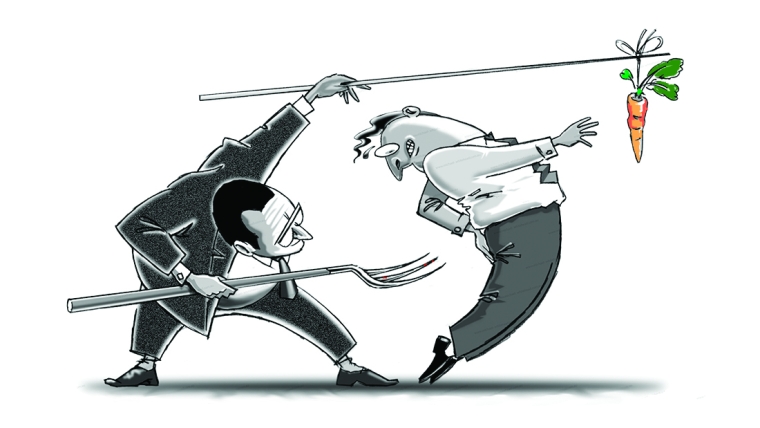 We didn’t want it, but we always half expected it. Level 3 is back for Auckland. Level 2 for the rest of the country. While the government assesses the scope and impact of the latest COVID cluster we ponder the more minor matter of whether it will be enough to knock the currency from its recent perch.

In the very immediate you might have to say yes. If the RBNZ were looking for a reason to stay dovish they just got it. While three days of lockdown might pose serious challenges to marginal businesses it is hardly a crisis for the country. But it does bring that renewed sense of uncertainty. And that looks likely to ensure that Governor Orr & Co continue to plough “the path of least regrets”.

But in the medium term a three day lockdown, or even a bit more, looks but a blip on the satellite image. Unless the current cluster manifests itself into something much greater, then the local trajectory for stable employment and higher inflation looks robust. If anything, it might just lead to more supply chain issues, which have shown to be a key driver in price hikes. As a result, we’d expect to see NZD/USD remain well supported, but perhaps see maximum underperformance on the cross rates, particularly NZD/AUD, which may target the 0.92 zone this week.

One of the main reasons we think NZD/USD will remain well supported is that inflation expectations continue to drive higher, both here and globally. We touched on it last week but the RBNZ’s own survey last week showed a big lift in the 2 year inflation expectation – up to 1.89% from a prior 1.59%. That’s a significant move.

Despite a drop in official inflation in the US (down to 1.4%) we are still seeing similar trends there, by virtue of the price for treasury inflation protected securities (TIPS).

As bond markets stagnate a lift in inflation expectations is driving implied real cash yields further into the negative, and that is continuing to drive money in search of alternative options, be that in stocks, commodities, property or bitcoin.

A quick look at US inflation expectations versus the S&P 500 show a very high degree of correlation since the onset of COVID. Unsurprisingly the graph of the risk sensitive pairs, NZD/USD and NZD/JPY, look very similar.

Until inflation expectations soften or interest rates start heading further north it is highly likely that “Goldilocks” conditions for financial markets (if not economies) will continue. 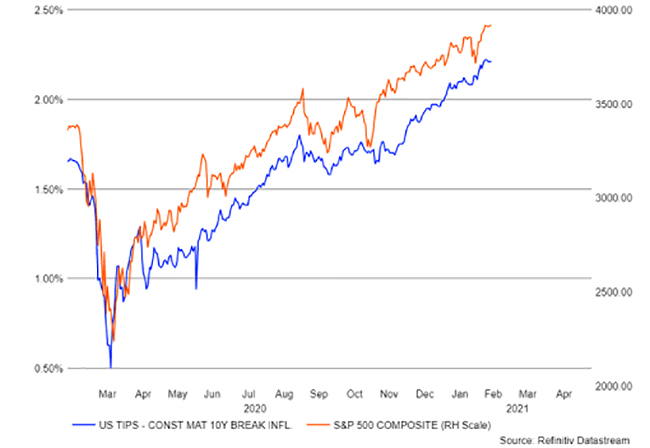 The main factor contributing to the rise in inflation expectations is the sheer volume of stimulus that has hit developed economies. Certainly since the Biden administration has been voted in, inflation linked commodities and associated currencies have significantly improved. Recently though we have seen some levelling off in both, with both NZD and AUD trading in a relatively tight range during February. We think this is largely due to the hesitation about the passage of the $1.9T Biden stimulus bill, but momentum was also clearly impacted by that slight drop in US inflation last week.

The failed impeachment bill against former President Donald Trump received a lot of media headlines, and who knows maybe we will see him back for another crack in 2024? But in FX markets its main function was to clear the decks for the vote on Biden’s proposed $1.9T package. If it passes in its current form that will bode well for inflation expectations, commodities, stocks and therefore NZD and AUD. But if it is watered down by the Senate Republicans then that may definitely add some near term risk for both too.

The importance of synchronicity

Finally, on the subject of stimulus if modern monetary theorists are to believed (and current market dynamics would support their views) then there is really no effective limit to government spending. For every Dollar spent in the local economy it must at first be created as a number on the Government balance sheet. Taxation and interest rates are then just used as tools to control the amount of said money left in the economy. And a higher government deficit effectively means a larger level of private savings. So we should not be so concerned with government debt. In fact maybe we want more of it.

In principal we agree with this, should both the central bank and government be on the same page. Unfortunately as we have seen in NZ (and elsewhere) that is not always the case. By that we mean that loose interest rate policy combined with stimulus is fine (even desirable) if it pushes money into productive areas.

The risk with market distortions is that they tend to end badly, both for the respective economy and currency. That’s worthwhile keeping in the back pocket should the New Zealand Dollar push closer towards the top end of its range in the next few months. Maybe then, and not now, the Kiwi will reach its moment of truth.

The last 4 paragraphs are prescient. The last 2 is what is currently happening, I think we have zero chance of our leaders realising productivity is actually important and doing something about it. Here's an idea - mass infrastructure build with printed money, allow local councils to receive printed money for infrastructure projects. We have water woes in almost every major city and infrastructure deficits all over the place.

Hamilton/Kirikiriroa would be a candidate if NZ decided to shift its capital to a safer location.

Not to dis Hamilton as a place, my intent was to disconnect from any current city locations as they are all on colonial coastal or river ports. To avoid any legacy infrastructure, disruption to current business or council drama just start from scratch. Buy some farms and lease them back while planning happens. All land can remain leasehold to the crown and the boundary made rock solid. Surrounding towns could provide for those for whom apartments are distasteful. Thinking like here -40.0969654380198, 175.33405558532385 ,just need to tell the air force that they will be sharing Ohakea.

Hamilton has quite good bones for rail-base urban development. It has train line through the city-centre, tracks going in three directions and the potential to build some good loops. The Southern loop could connect with the airport.

Somewhere around Palmerston north was my second thought.

Just a kind reminder - the 2 escalators on Britomart train station were added quite recently and it took about 1 year !!! what new cities are we talking about here?

Jason Wong Both the NZD and AUD outperform