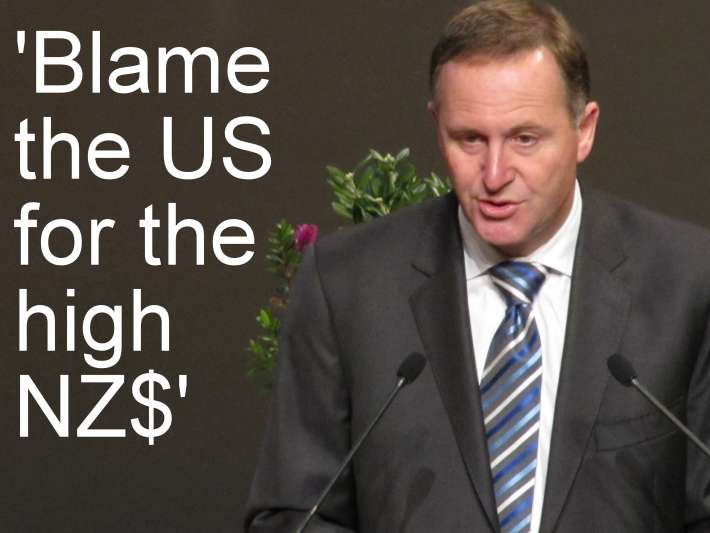 The extent of the New Zealand dollar's strength depends on how long the United States takes to sort out its economic woes, according to Prime Minister John Key.

The Kiwi hit 83.8 US cents on Friday night – a new post-float high – prompting questions of how much longer this would go on.

“Ask the Americans. They’re the ones borrowing US$4.6 billion a day,” Key told journalists in Wellington this morning.

Key, a former currency trader, has said he believes the rise in the New Zealand dollar has been primarily due to an "inherent weakness" in the US dollar as the US Federal Reserve printed money - quantitative easing (which has now ended) - to try and jump-start a stalled US economy.

Key and Finance Minister Bill English have previously stated their view that it could take a decade for the US and UK economies to recover from the hits they took during the global financial crisis. Investors were therefore looking for economies in better shape, with Australia at the forefront and New Zealand close behind.

Compared to the US and UK, New Zealand increasingly looked like a good bet economically-wise, with the government saying it would return to budget surplus within three years in order to start paying back debt.

Key reiterated comments that he was not so worried about the Chinese economy overheating and slowing down as authorities there sought to control inflation. Official Chinese figures show headline inflation hit 6.4% in the year to June, above expectations and pushing the cause for further interest rate rises.

“I can only work on the advice we get, but I think they are, broadly speaking, managing,” Key said.

“And one of the issues with China of course is they are building up their [foreign currency] reserves – they’re actually not bringing their money home,” he said.

“The question is, can they control their credit growth? Well I’m not the expert in those matters, but those that are tell me they’re [the Chinese] on top of it."

“Ask the Americans. They’re the ones borrowing US$4.6 billion a day,”

Yes John, but they have 75 times as many people - so that would be about the same as us borrowing $60m odd a day - which if you recall we are doing about 2/3 of that!

But worse - we've got maybe $15b in reinsurance and insurance money still to come in - if that's spread over 2 years then that's another $20m a day.

Oh, so we are both in about the same position!!

When the USA was (supposedly) making money hand-over-fist in the mid-2000s, Kiwis were gleefully shrieking "Where they go, we follow!"...But as soon as the wetdream inevitably ended and the USA headed straight for the plug hole, those same now-horrified Kiwis screamed "It can't happen here, we're different!"...

Yes, it says alot about globalisation.  Fundamentals are just out the window.  The only game in town is currency speculation.  Crazy.

Globalisation in the ideological/sociological sense, as per;

And fundamentals in the fiscal/economic sense.

The more Ilisten to JK the more I just hear excuses why he can't do something. I think he needs to start saying what he CAN do - he seems very lost of ideas.

Sadly it seems all those who were so desperate for a saviour glossed over a few glaring issues with our man JK. Now we see what he has always been made of , nothing.
He could do many things , some of which folk here have pointed out , why doesn't he. Because he doesn't call the shots is becoming more likely by the day.
As Kate said , fx is the only game going right now .

What has become quite evident over the last year is that John Key has shit for brains. End of story.

There is no chance I'm going to vote for him this year. Sadly, there is no other main party that deserves my vote either.

I have repeatedly given my solutions on this forum. The New Zealand economy needs more net government spending - either more spending, or fewer taxes. The politicians need to stop worrying about government "debt", as the issue of government securities is merely a reserve drain and does not fund spending. The politicians also need to know that foreigners do not fund our spending, the central bank sets interest rates (not the 'bond vigilantes'), and that the government is a currency issuer unlike Greece.

I've been quite clear what the solutions are. The problem is no politician understands our monetary system. As I said above, they all have "shit for brains" - John Key, Don Brash and Bill English included.

New Zealand government debt is entirely denominated in NZD's, barring a minute amount of currency swaps which are approximately $1b total. All Treasury securities are bought and redeemed in NZ dollars.

So you agree with me now?

He sure does , so why people still have not worked that out is crazy. The problem is that the options presented to the country are garage & low quality from end to end , I think we have established that.

Keep an eye out here;

If they're smart - they would be the first to accept the recommendations on gradually raising the age of super - in addition to support for CGT and/or other structurally significant tax changes.

The other thing I like about Winston is NZ First's fundamental policy regards the Treaty "principles" non-sense.  There are no "principles" in the Treaty of Waitangi - there are just "articles".

He would remove all reference to "the principles of the Treaty of Waitangi" from all NZ legislation - and I tell you what - that would make a HUGE difference to funding Government Departments efforts to follow/accommodate these non-existent "principles".    The RMA and education are but two areas that spring to mind - the cost of accommodating these "principles" in these two areas is huge.

The next steps in progressing the Trans-Tasman Single Economic Market will be on the agenda when Finance Minister Bill English meets Australian Deputy Prime Minister and Treasurer Wayne Swan this week.

The ministers meet in Wellington on Thursday, before they share their views on the economic outlook for Australasia in speeches to a Trans-Tasman Business Circle lunch in the city.

“I’m looking forward to again catching up with Treasurer Swan to discuss a number of issues of mutual interest to New Zealand and Australia,” Mr English says. “Australia is our closest international and economic partner – it remains our largest export market and an important source of investment.

“I am keen to discuss next steps in the Single Economic Market agenda, and I would like to hear Mr Swan’s perspectives on the impact of the global economic situation on Australia and its economic outlook.

“At the same time, I’ll update him on our Canterbury earthquake recovery programme and, more broadly, outline our programme for building faster economic growth and getting back to budget surplus.”

Mr English and Mr Swan will also meet a group of New Zealand company chief executives to discuss how the Trans-Tasman economic partnership can be further strengthened.

Shouldn't that last bit read "to discuss how they can lobby for their own vested interests, while trying to paint this as good for all NZ"?