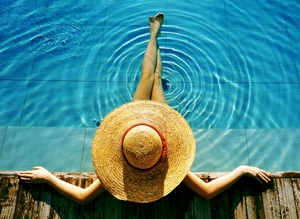 As we roar up our fireplaces, and find ourselves arriving at and/or leaving work in the dark, so too do we start getting enticed by the idea of a mid-winter getaway.

We enjoy the escapism of perusing the internet in search of the sunniest place to go.

But (naturally) we’re less riveted by the idea of perusing the internet in search of the best travel insurance policy.

Plus, why would we bother when we can pretty much get travel insurance automatically through our credit card?

The chief executive of Financial Services Complaints Limited (FSCL), Susan Taylor, points out why we should do our homework, before assuming our credit card insurance will pull through if we need it.

To begin with, most credit card providers require you to pay for a large portion of your flights or travel expenses, using your credit card, before you leave New Zealand.

ASB 90-Day Gold Card holders for example, need to have charged at least half of the entire cost of their overseas travel tickets, including any applicable airport taxes, to their cards.

BNZ Gold Card holders need to have paid for at least $250 or $500 of their pre-paid travel costs (depending on where they’re traveling) with their cards.

Both banks also make provisions for if their card holders are buying flights using air or frequent flyer points.

Taylor points out many credit card insurance providers also require you to let them know you’d like your travel insurance activated, as this won’t necessarily happen automatically.

Furthermore, she points out credit hard holders need to be aware of clauses which say you need to start and end your trip in New Zealand to be covered. She says she has encountered an unusual case, where an elderly man was denied cover for a medical condition he suffered on a river cruise in Europe.

Taylor says a fundamental difference between credit card and regular travel insurance is the limit set on the travel time credit card holders will be insured for.

When you take out regular travel insurance, you tell the provider how long you’re heading away for, and thus how long you’d like to be covered for.

Credit card insurance providers however will only cover you if you’re going away for a short period of time.

Westpac’s Platinum MasterCard has a 35-day limit on the length of time you’re insured for, while the ASB 90-Day Gold Card has a 90-day limit. Some credit card providers allow you to extend this time limit by around 10 to 90 days.

Taylor says, “If the cardholder is away overseas for longer than the 35 day limit for example, they have no travel insurance cover at all.

“So in other words, even if something happened on say day five of their travel, if the length of their holiday is more than 35 days, there’s no cover at all.”

She says, “Generally speaking, if you’ve got say the platinum card, where you’re paying more in an annual fee, you’ll find the length of the trip is longer than say your standard card.”

Non-disclosure of pre-existing medical conditions is a big trap people fall into with all types of insurance – but poses a particular risk when taking out travel insurance using your credit card.

When taking out regular travel insurance through say Southern Cross, the insurer will specifically ask you to disclose any pre-existing medical conditions, prompting and reminding you of the seemingly insignificant conditions you have to note.

With most credit card providers, you have to notify the insurer of any pre-existing conditions on your own accord.

Taylor says, “Non-disclosure of pre-existing medical conditions is one of the largest reasons why insurance claims are declined for travel. People sometimes just don’t realise that something that may have occurred a year or so ago, needs to be disclosed.”

The Insurance and Savings Ombudsman (ISO) declined a complaint it received from a woman whose travel insurance claim was denied in 2010 due to non-disclosure.

On the day she bought flights to Europe, she received test results from an ultra-sound she’d had done, indicating it was probable she had ovarian cysts.

After getting this confirmed by a doctor a few days later, she cancelled her trip and made a claim for $10,000, for the non-refundable portion of her intended travel.

The woman argued that until she saw her doctor, she didn’t have “pre-existing knowledge” about the possible seriousness of the cysts.

Yet the ISO ruled she had a “pre-existing condition” in terms of the policy, because she had sought medical attention for a “sickness” prior to purchasing the tickets and further medical attention had been recommended.

It said, “While C [the woman] may not have realised the significance of the possible ovarian cysts until she consulted her doctor, the exclusion did not require knowledge of how potentially serious a condition might be, but required knowledge of a “sickness” within the 6 months prior to the activation of the policy.”

If you’re over a certain age, you won’t get cover automatically and may need to pay extra.

ASB 90-Day Gold Card holders won’t be covered at all if they’re 80 or over.

Taylor says, “Anyone over 65 should be checking to see if you’re automatically covered or not.”

Overall, she says she can’t say whether it’s better to take out travel insurance through your credit card or directly through an insurer, but says the most important thing is that you know what you’re getting.

Add in but I think that all CC travel insurance requires you to inform them before hand?

At that time they take the opportunity to charge for extras not covered by the std policy. At this point I suggest you dont quickly accept their surcharges but shop around as they charge like a wounded bull.

Eligibility for cover:
Your cover is automatic as long as at least half of your prepaid expenses are paid for with your ANZ premium card....etc.
'Automatic' suggests just that.....

Great article - the T&Cs of credit card travel insurance are seldom read, understood and thankfully, relied on. But when you do, it can be messy. And what you thought was obvious may not be the case. I've noted https://www.moneyhub.co.nz/life-insurance.html doesn't cover credit card travel insurance, perhaps a resource to come. These policies need to come with a warning for everything you have raised.