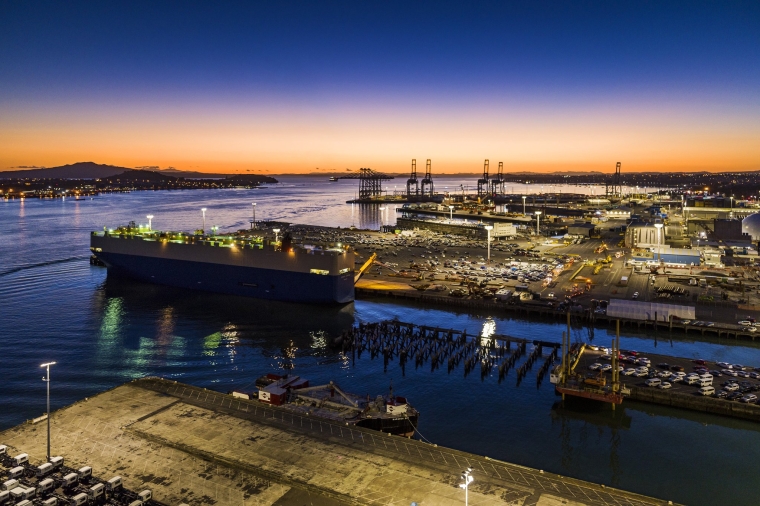 The Auckland Council's dividends from the Ports of Auckland will be slashed in 2020 and 2021.

Auckland Council currently has 100% ownership of the port and it received an annual dividend from its shareholding of $51.1 million in the 2017/18 financial year.

But the port company has increased its debt by 30% since last year as part of an investment programme to increase its capacity and returns, despite the fact its long-term future hangs in the balance.

The Ports of Auckland signalled earlier this year that it would be paying a reduced dividend to the Auckland Council. But a new report shows just how much the council’s returns will fall by. The Ports of Auckland Statement of Corporate Intent (SCI) covers the period from July 1, 2019 to June 30, 2022.

It says it normally pays the Auckland Council a dividend of 80% of its after-tax profits.

“Each year the Board will review its ability to pay dividends at this level after giving consideration to; the ongoing needs of the business, the riskiness of the market environment, the requirements of the Companies Act and the statutory obligations imposed on Directors. Dividends will be paid in two instalments in February and August.

“Due to the high level of capital investment required to meet Auckland’s growing freight needs, for the financial years ending 30 June 2020 and 2021 POAL anticipate paying a dividend of 20% of after-tax profits.”

A report to the Auckland Council’s Finance and Performance Committee says the lower dividends are because the port is in a ‘capital expansion’ period.

It says the expansion work is designed to improve the ports capacity, automate some of its operation and reduce the impacts of car imports on Bledisloe and Captain Cook wharves.

“The successful completion of the automation project is critical to returning to a more favourable financial position. Given how important this is to POAL’s future performance (which impacts on the group position), POAL needs to ensure that the council is kept appropriately informed of its progress during the critical implementation period, including the ongoing level of risk.”

“However, there may be scope for more improvements. POAL should further investigate new solutions for handling car imports to reduce both the impacts of cars on the wharves, as well as the congestion impacts of transporting cars off the wharves by road transport.

“To ensure that the benefits of the capital expansion and automation project can be fully realised, it will also be important to address supply chain constraints for the container trade beyond the port gate. POAL should engage with the council on both of these issues.”

According to the Auckland Council Group Performance Overview, which was released in June, the port company has taken on more debt to pay for its expansion plans.

“Ports of Auckland is in the midst of a major investment programme to increase capacity, efficiency and returns. This includes container terminal automation, construction of a car handling facility and capital investment at its Waikato Freight Hub. This investment has resulted in an increase in debt from $368.0 million to $479.7 million.”

The council report says this has been accompanied by a fall in container volumes due to “reduced terminal capacity during the automation works and the loss of a major contract”.

While there has also been a drop in the number of cars being processed by the port due to lower car sales and the impact of new biosecurity measures. It says such factors are likely to have an adverse impact on the Ports of Auckland’s net profit after tax for 2018/2019. But it says the capital investment by the Ports of Auckland will lead to added capacity and the outlook is projected to improve in 2021/22.

Auckland Mayoral candidate John Tamihere has called for the Ports of Auckland’s business operations to be privatised to help ease the financial burden faced by the city’s ratepayers. Under his proposal released in May the Super City would still retain ownership of the land the port sits on and the new port owners would have to lease the land back from the council at a “credible commercial rate for up to 25 years”. They would also be expected to develop an agreed exit strategy.

While NZ First MP and Minister for Infrastructure Minister Shane Jones is continuing in his quest to see the Ports of Auckland’s operation’s moved north to Whangarei. He says connecting Northport to rail and enabling it to service Auckland-bound freight would make a major contribution to the region’s economic development.

In 2016 the Auckland Council formed a working group to look at the long term options for the Ports of Auckland. The resulting Port Future Study said that the port would face problems going forward due to its location. The report identified two potential locations for a new port at either the Manukau Harbour, or the Firth of Thames, which it said should be investigated.

$63 million on how many hectares of prime waterfront realestate?

oh this is convenient...wasn't someone who was running for mayor suggesting the port be flicked only a week ago? Good old cause and effect..neolibs never die they just infect the nearest mayoral candidate. Keep your assets safe Auckland, they are extremely valuable and you have no future without them.

Why should it pay any dividends, given the size of the debt???

Because AC depends on 'em ('Other Revenue' in their Annual Plan (linked above) to hold down rates. Easy 'Other Revenue' while it's there. Until it isn't.....

POA reminds me of the old Soviet joke..."if Russia took over a desert state, within a short time there would be a shortage of sand."
Similarly, when the state (Auckland Council) takes on a successful business, soon, there will be a shortage of profits. They have milked the port of dividends to prop up their own balance sheet leaving POA to, effectively, borrow to pay the dividend.
The muppits on Council are unable to see that many successful businesses need to use supposed "profit" to fund ongoing development. Council has always viewed POA as just a "cash cow".