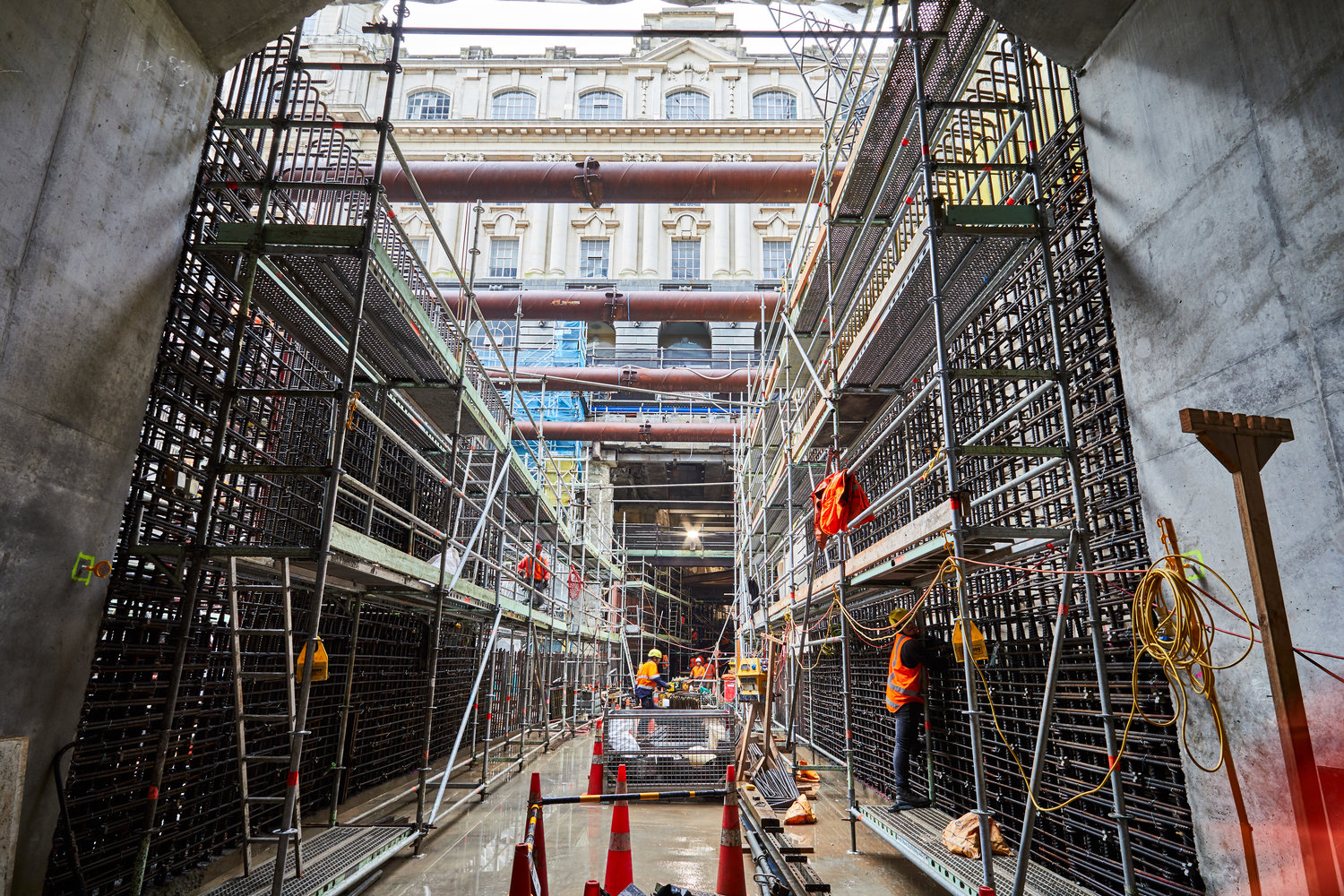 Work on Auckland's City Rail Link project is expected to be completed in 2024.

The creation of a New Zealand Infrastructure Commission is vital to address the country’s infrastructure crisis, according to newly appointed board member Stephen Selwood.

Infrastructure Minister Shane Jones announced Selwood as one of the board members of the yet to be established Crown entity on Wednesday morning at the Building Nations Symposium in Rotorua. Selwood is stepping down as the CEO of Infrastructure New Zealand to take up the new role.

While Government ministers will still have the final say on public spending, the commission will have an independent board and the autonomy to provide robust, impartial advice on existing and future infrastructure projects. The legislation that will have to be passed to create the Infrastructure Commission is still before Parliament’s Finance and Expenditure Select Committee. But Jones says he expects it to be passed by the end of next month.

Years in the making

For Selwood it has been a long-time coming.

“Infrastructure New Zealand has been campaigning to have a commission for the best part of a decade,” he says.

Selwood says it is important to help build political consensus and a long term strategy for the country’s infrastructure. He says there has previously been a reluctance, politically, to create an independent body with such a role.

But Selwood says he was pleased to see bi-partisan support for the New Zealand Infrastructure Commission/Te Waihanga Bill when it had its first reading in Parliament in April.

“New Zealand needs to think more strategically about its infrastructure. We are decades behind in terms of where we should be.”

He says you only have to read the news to see we have an infrastructure crisis. From the congestion on the country’s roads and problems with housing affordability, to water contamination and the need for new schools and hospitals.

“All of these issues will be the key issues the Infrastructure Commission will be looking at going forward.”

And Selwood says the New Zealand Infrastructure Commission’s autonomy and independence will be vital to it fulfilling its role.

“It’s fundamental,” Selwood says. “What we need to do is build consensus about what needs to done. And having that independent view will allow us to work together to find solutions.”

His thoughts are shared by Jones who says the country’s infrastructure deficit is massive, with Treasury estimating the country will need to spend $130 billion dollars over the next 10 years on everything from roading and rail to ports, schools and hospitals. He says not all of the money will come from central government and that does include local government infrastructure as well, but he says it illustrates the scale of the problem.

Jones says he’s keen to see the Infrastructure Commission up and running by the end of the year.

“There is a hefty set of expectations that the Infrastructure Commission will address the planning, procurement and pipeline concerns people have and encourage a more efficient way of developing infrastructure.”

Jones first announced the creation of the New Zealand Infrastructure Commission, Te Waihanga in February this year. He said the commission would help ensure the country makes the best decisions around infrastructure investment to improve the long-term economic performance and social wellbeing of New Zealand.

“The commission will develop a broad consensus on long-term strategy, enable coordination of infrastructure planning and provide advice and best practice support to infrastructure initiatives,” Jones said. “We want the commission to be a well-respected public voice that has credibility among the private and public sector and helps integrate across our entire infrastructure system.”

“Our transport and urban infrastructure is struggling to keep up with population growth, increased demand and changing needs, including transitioning to a low emissions economy. New Zealand’s regional infrastructure is often not at a standard required by communities – this infrastructure deficit is manifesting in housing unaffordability, congestion, poor quality drinking water and lost productivity. That’s simply not good enough.”

With a global slowdown well underway and concerns about a future recession there have been calls by some economic commentators for the Government to do more to stimulate the economy through fiscal policy and in particular, infrastructure spending.

Finance Minister Grant Robertson announced in May that he would change the Government’s net debt target from the existing 20% of GDP to a range of between 15% and 25% by 2021-22. The announcement was seen as a shift from the approach he’d previously adopted with his Budget Responsibility Rules which had a target of reducing debt to 20% of GDP within five years of taking office.

Robertson said the increased debt target would give the Government more options if it wanted to combat the impact of an economic recession, or fund high value investments that will produce future economic dividends. New Zealand's core Crown net debt is low by international standards and the debt restrictions have been criticised for restricting government investment.

Speaking of things struggling - the Government certainly is when it comes to keeping up with its immigration “promises”.

They are going to look very foolish going into the next election when the subject of immigration policy is raised.

Arrh, so Mr Selwood has managed to get himself promoted from spokesman of the cosy cabal of leading (& whanabee) construction firms to the heady heights as a "director" of a state-funded government quango. Basically he has long argued that the principal funders of infrastructure, local government, has never managed to screw enough money out of ratepayers to provide the major construction firms with the rising income they dream about.
Instead the new"commission" will be able to extract serious money out of the nation's taxpayers. (I always find it strange, almost amusing if it wasn't so serious, that ratepayers and taxpayers are disconected entities!)
It hopes to spend this new money, according to Selwood, with "autonomy" & "independence". One assumes he is expecting that no mere elected representative will be permitted to question the commission's spending decisions?
In this brave new (Labour) world of 'commissions', 'inquiries', 'working parties', etc., we are being lead to believe that there is new money just waiting to be spent...money that somehow can be taken from citizens without being catergorised by that nasty phrase, "new taxes".
One supposes it will take a little time for this new quango to settle in, rent premises, appoint a suitably internationally qualified (& remunerated) CEO, create a glossy statement of intent, and spend some of the new found funding to commision a design study for the important new commission logo?l
It has been suggested that there is "bipartisan " support for the creation of this new empire. Shame upon National if this is actually true.
Sigh......the one thing we all know about governments in general, is that they all,...always, have more bright ideas than the poor taxpayer is able to fund!

You didn’t actually read the article did you?

The commission is an independent advisor on infrastructure projects to the public sector, they won’t actually decide what is actually spent that will have to be Government departments. This is type of organisation is desperately needed so that we actually have a longer term vision on our infrastructure needs and is more strategic about them, and that isn’t completely at the whim of the Government of the day. Similar independent bodies exist globally and NZ is behind the times on this.
The commission isn’t being given any funding to spend on infrastructure but that wouldn’t fit with your narrative, so why let the facts get in the way.

Well, there's the need for a brand-new LNG import terminal, probably in Awkland, for starters. And all because of the O&G debacle, which will see the 'Naki infrastructure and the pipeline to Awkland becoming stranded assets. Pity about the net increase in emissions. Pity about the prospects for mining/geology education - now essentially a dead-end for eager young students, who would be better off in Perth, because No Mo' Mining on Crown land, either.

Perhaps they should scrap the Productivity Commission to balance things out. It's done some good work which has been largely ignored and we are no more productive now than before it was set up.

If Selwood gets his $300K houses in Auckland its a good appointment.

At least he understands the problem is the lack of housing on cheap rural land. Most rave on hopeless ideas like higher density around bus stations.

Why not make the entire Auckland area a residential zone - like it was back in the 50's before the Town and Country Planning Act. Even for say 5 years so there is a house building boom to rescue us from this housing hell.

Has anybody deduced this is the old ministry of works rebooted? I like it, the fragmented approach of the past 40 years will take some catching up on...