Reserve Bank finds the reduction in term deposit and mortgage rates between 2016 and 2020 lifted households' net incomes by 0.1% - other things constant

Reserve Bank finds the reduction in term deposit and mortgage rates between 2016 and 2020 lifted households' net incomes by 0.1% - other things constant 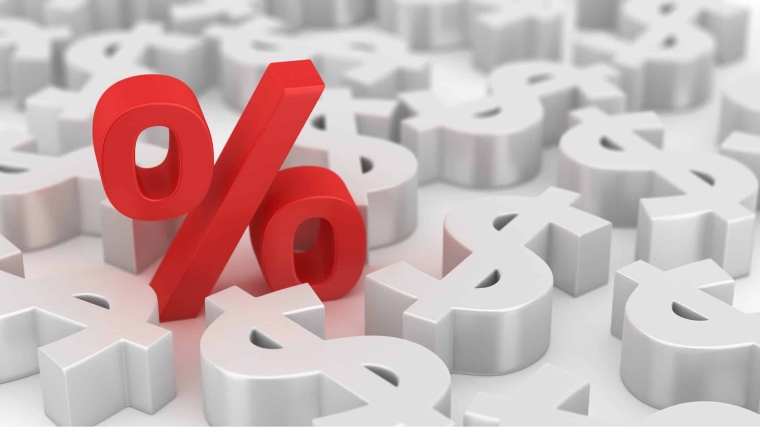 The Reserve Bank (RBNZ) estimates the reduction in term deposit and mortgage rates between 2016 and 2020 increased New Zealand households’ net incomes by 0.1%.

The RBNZ came to this figure by looking exclusively at the cashflow effect of deposit and mortgage rates falling. For the purpose of the exercise, it ignored the asset price inflation and positive labour market effects that accompanied lower interest rates.

The RBNZ found the country’s 30% lowest income earners saw their incomes fall between 2016 and 2020. They lost more from lower bank deposit rates than they made from lower mortgage rates.

These people were largely made up of retirees (44%), beneficiaries and part-time workers, who either rented or owned property mortgage-free. 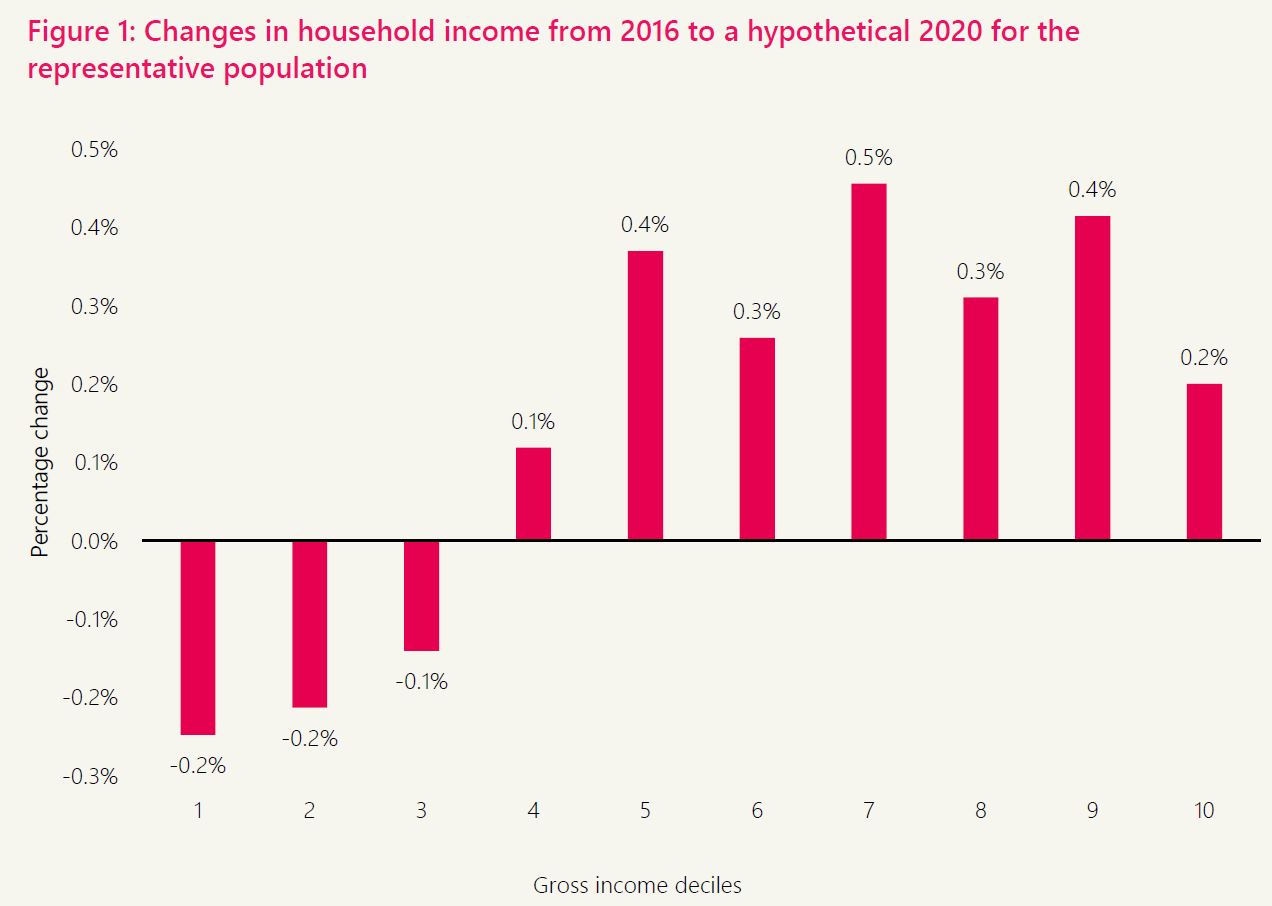 The country’s 70% highest income earners saw their incomes rise between 2016 and 2020 - once again looking at the impact of falling mortgage and term deposit rates in isolation.

The largest benefit was felt by the seventh income decile. The highest income earners didn’t benefit as much from lower mortgage rates, as they held a wider range of assets. 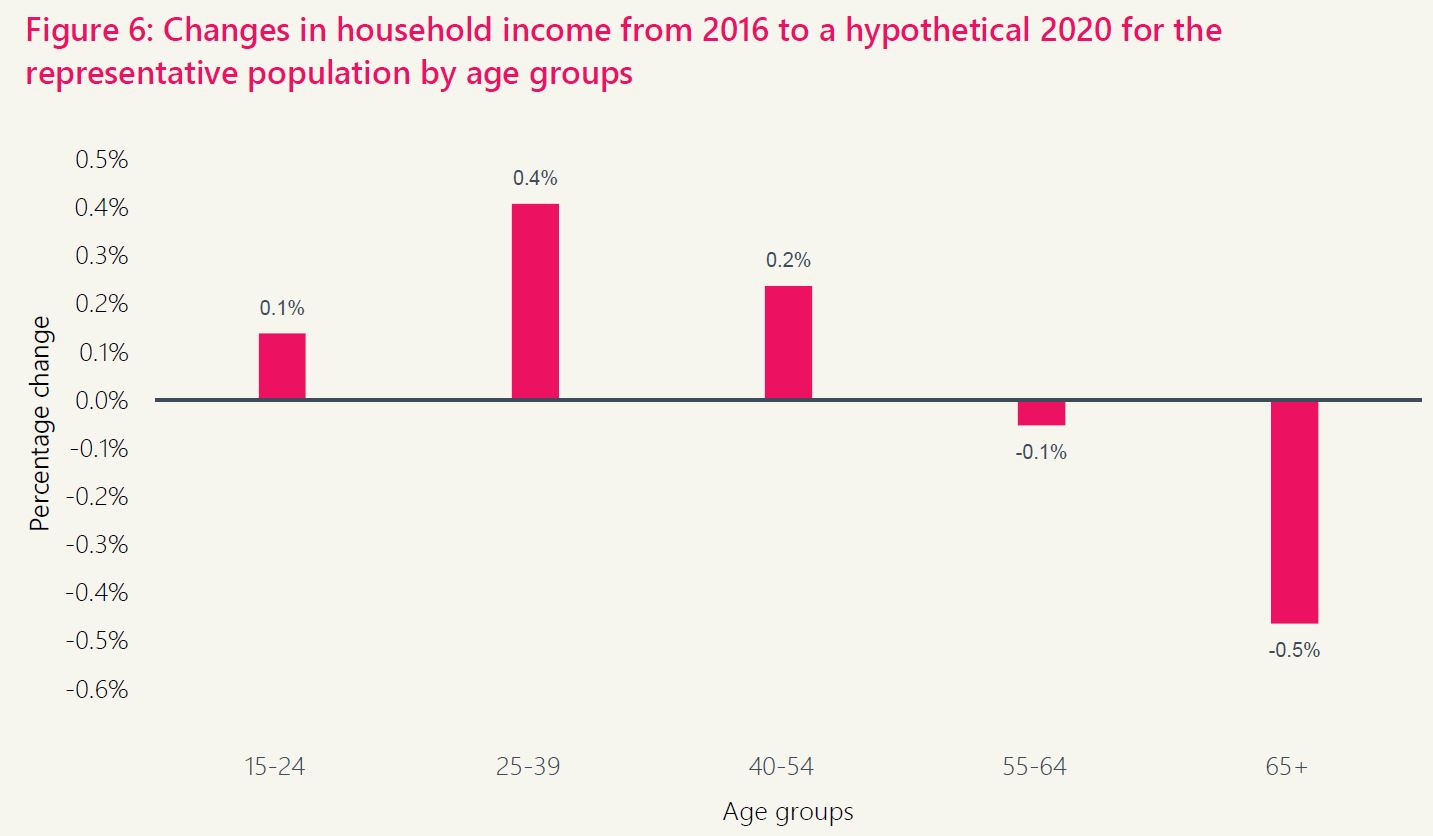 The RBNZ found the average mortgage holder’s income increased by 1% between 2016 and 2020.

Mortgage holders with low incomes benefited the most from mortgage rates falling. 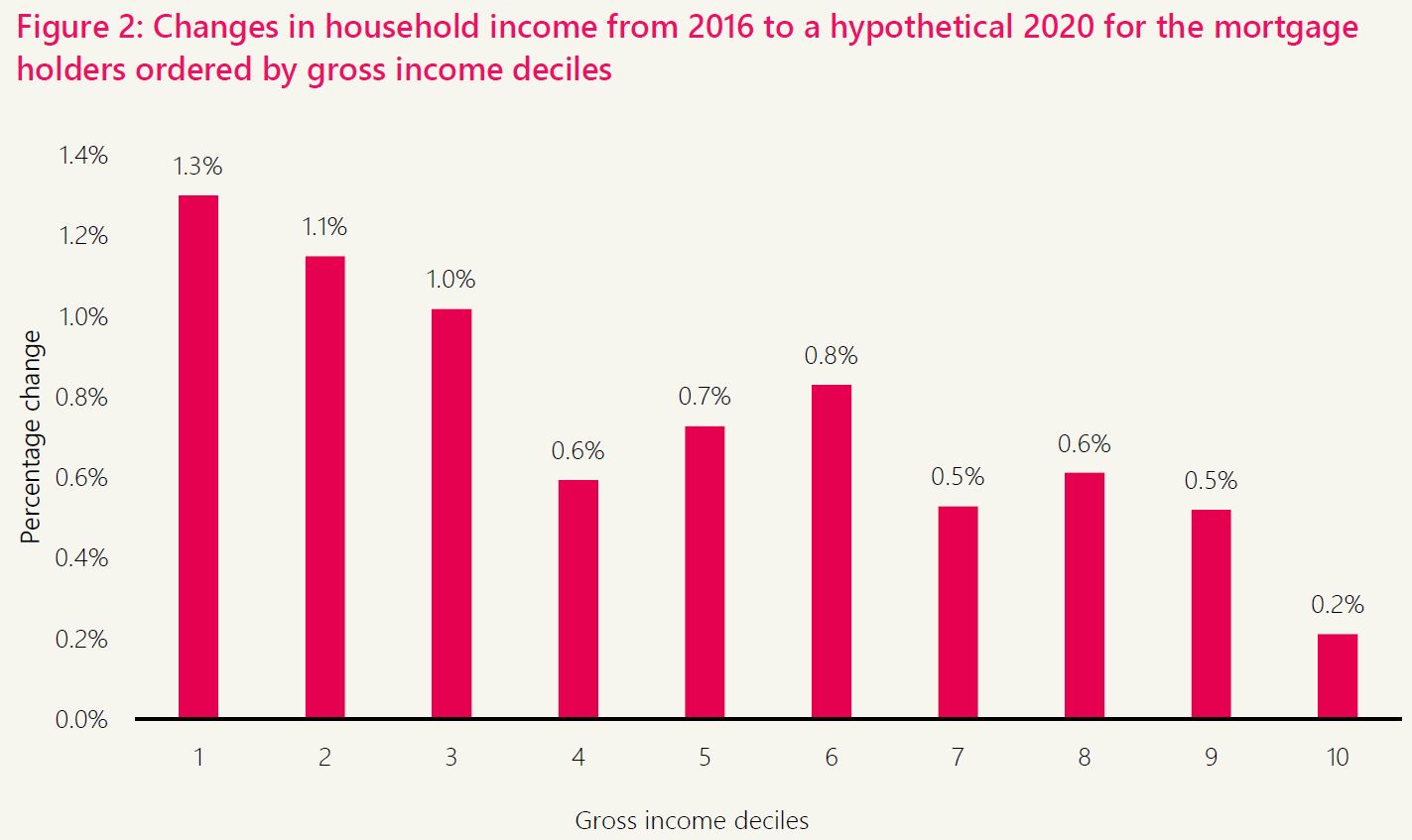 As for non-mortgage holders, their cash-in-hand fell by an average of 0.4%. 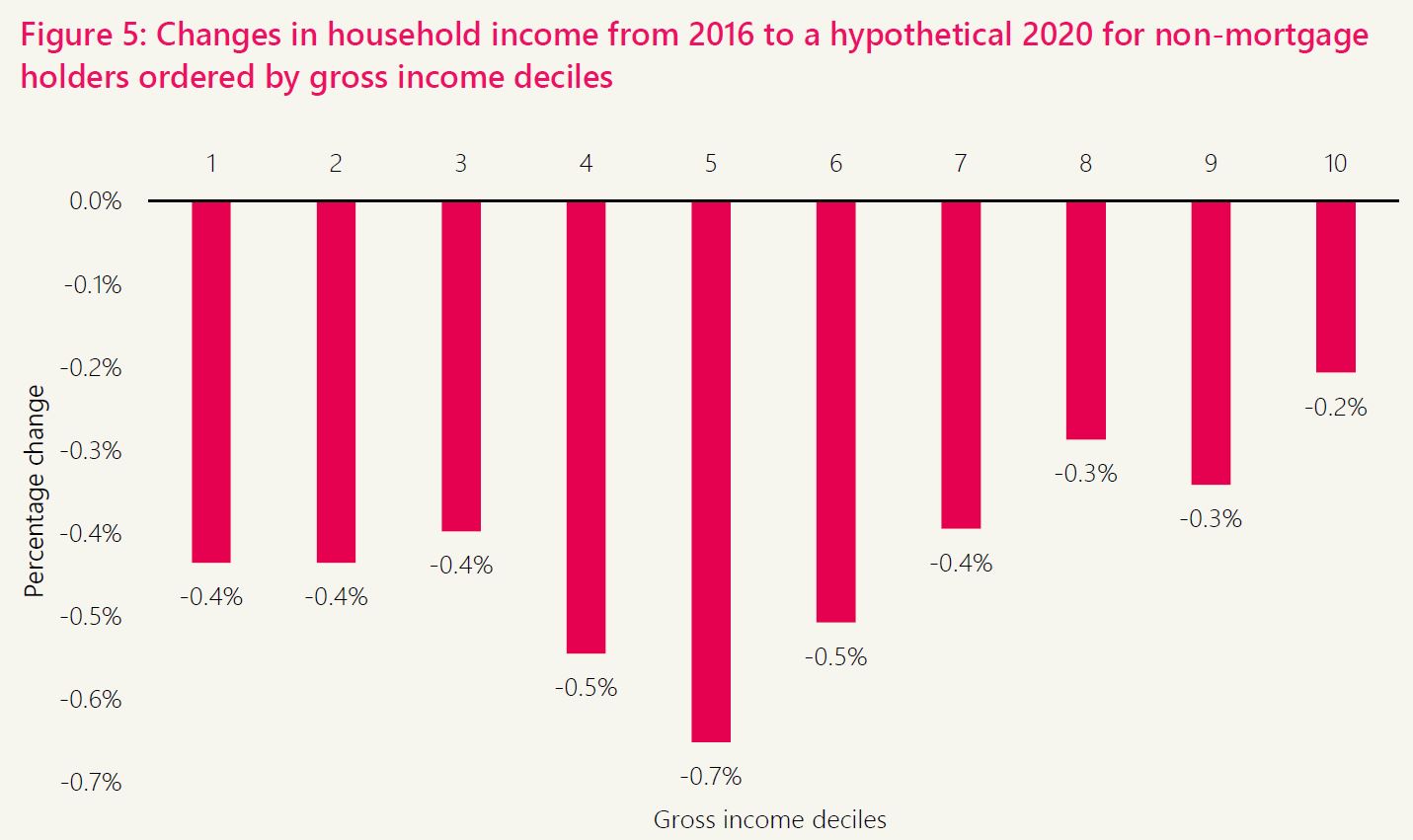 The research is part of a larger body of work the RBNZ is doing on the distributional impacts of monetary policy.

With the minor side effect of raising house prices ~25% in the past year alone.

I suppose the answer to whether it was worth it depends on if you own your own home.

Moreso if you own your own home, plus one or more others.

Moral of the story, "It's better to borrow and buy a house than to leave it in the bank."

With enough leverage, anyone can even move the earth.

Moral of the story, "It's better to borrow and buy a house than to leave it in the bank."

Or even better to be a member of the landed gentry than one of the turnip class. The ruling elite have your back.

0.1% is a remarkable figure! Nothing happened.

Remarkable in that it is an irrelevant figure to the extreme. I own a home but have no mortgage. So my savings in term deposits lost income by about 80% (once my 5 year 5% came due last year and became a potential1% return) and inflation took away who knows how much more...sooo...it was a no brainer..I sent all my savings money out of NZ and and will not come back there until I can get a decent rate of return again..simple math....no matter what figures rbnz manufactures.

Increase households' net incomes by 0.1% in 4 years, is this how RBNZ defines "boosting economy"? Man, this is pathetic! Despite keeping the unemployment rate low during pandemic, their monetary policy failed miserably...

Can RBNZ do another research on how many high-income opportunities from existing productive enterprises and could-have-been startups has the debt-fueled housing frenzy chased away to overseas destinations?

Grant Robertson often argues with media commentators that those factories shutting down are doing so to move to cheaper destinations.
Never mind the fact that his government has done a kicker job increasing the wage differential between NZ and those other places without bringing about the economic productivity gains.

Grant Robertson often argues with media commentators that those factories shutting down are doing so to move to cheaper destinations.

Never heard this from Robbo. I heard him saying that inflation is related to "economic growth".

Sack the big guy immediately. Abundantly incompetent and a total lack of foresight.

Imaging if low interest can boost income, What will happen with no interest or if Uncle Orr starts paying incentive to borrow money interest free.

A lot of oldies must be sitting on big war chests. Time to crack em open. I've never seen a trailer on the back of a hearse.

Now low interest cannot be raised or raised as slowly as possible to protect speculators as have borrowed to extreme......Orr allowed himself willingly to be put in a posistion to be blackmailed to not raise rate.....and his happy as that is what he wanted.

Hmmmmm...
The proportion of people living in their own home was the lowest in almost 70 years at the time of the 2018 Census, and homeownership is becoming much less common for younger people, Stats NZ said today.
Census data shows that homeownership peaked in the 1990s at 74 percent and by 2018 had fallen to 65 percent of households, the lowest rate since 1951. However, homeownership rates appear to have been more stable between 2013 and 2018.

Furthermore, the RBNZ claimed in May 2019 around two thirds of NZ households had no mortgage debt.

Wealth effect or wealth illusion?
The other therapeutic effect of lower-for-longer interest rates is the wealth effect. By driving up the value of future cash flows with lower rates of interest, all manner of assets – stock, bonds, and houses – increase in value and, thereby, can stimulate our marginal propensity to consume. More simply put, the imperative was to make rich people richer so as to encourage their consumption. It is not so hard to imagine negative side effects.

There are the obvious distributional effects between those who have assets and those who do not. Returning house prices in California to their 2005 levels may be good for those who own them, but what of those who don’t?

There are also harder-to-observe distributional consequences that flow from the impact of lower-for-longer interest rates on the value of our liabilities. This is most easily observed in pension funds.

Consider two pension funds, one with a positive funding ratio and one with a negative funding ratio. When we create a wealth effect on the asset side of their balance sheets we also drive up the value of their liabilities. Lower long-term interest rates increase the value of all future cash flows – both positive and negative. Other things being equal, each pension fund will end up approximately where they started, only more so.

The same is true for households but is much more ominous, given the inequality of wealth with which we began the experiment. Consider two households: one with savings and one without savings. Consider also not just their legally-defined liabilities, like mortgages and auto-loans, but also their future consumption expenditures, their liability to feed and clothe themselves in the future.

But just because we don’t trade our future consumption expenditures on the stock exchange does not mean that the conventions of finance do not apply. The family with savings likely ends up where they started, once we consider the necessity of revaluing their liabilities. They may more readily perceive a wealth effect but, ultimately, there is only a wealth illusion.

But what happened to the family without savings? There were no assets to go up in the value, so there is no wealth effect – real or perceived. But the value of their future consumption expenditures did go up in value. The present value of their current and expected standard of living went up but without a corresponding and offsetting increase in assets, because they don’t have any. There was no wealth effect, not even a wealth illusion, just a cruel hoax.
https://realinvestmentadvice.com/the-wisdom-of-peter-fisher/

"ignored asset price inflation"
hmmmmmmmmm...
"Other than that, Mrs Lincoln, how was the play?"

Hi Jenny, This 0.1% will be based on official inflation number but reality is that actual inflation is much higher for an average Kiwi Family than official number as has many inclusions and exclusion to suit reserve bank.

Specially in last one year officaly inflation is 3.3% but anyone can vouch that spending is much more than last year, you included if you check.

The way it is calculated in not true reflection to family and is corrupted to suit reserve bank narrative.

I'm not that surprised. The Reserve Bank has supported an asset bubble that has little to do with the real, productive economy.

Well done RBNZ! And how much worse off is the next generation?

Thank you. You're too kind.