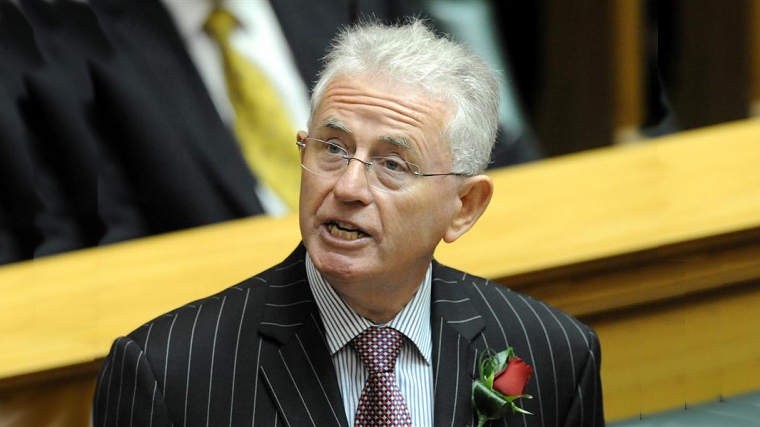 Michael Cullen, Finance Minister in the Labour Party-led government between 1999 and 2008, has died.

Cullen, who also served as Deputy Prime Minister from 2002, had been battling lung cancer for some time.

KiwiSaver, the New Zealand Super Fund and Working For Families are legacies of Cullen's time in government. Cullen was 76.

Below is a statement issued by Prime Minister Jacinda Ardern and Finance Minister Grant Robertson.

The Government is mourning the passing of former Deputy Prime Minister and Minister of Finance, Sir Michael Cullen.

“Sir Michael was one of the most influential figures in New Zealand politics over the last 40 years. Intelligent, funny and kind he left a significant legacy for the country,” Prime Minister Jacinda Ardern said.

“New Zealand is so much the richer, in every sense of the word, for Michael’s life. He gave his life to making this place better for everyone.

“He fought for social justice at every turn, understanding the need for balance and pragmatism at times, but always focused on the big picture and the long-term.

“He was a great friend to me and to many of the Cabinet and Labour Caucus. We will miss him terribly, and we are sending all our love to Anne and his family. We are devastated, but know that our grief is only a fraction of that which they will feel at the loss of a husband and father.

“For his whole adult life Michael has served his country with distinction and courage. As he himself said he has lived a long and very fulfilling life, one for which we are forever grateful. Rest in Peace Sir Michael,” Jacinda Ardern said.

Sir Michael Cullen was first elected to Parliament in 1981 as the MP for St Kilda. He was the Government Senior Whip from 1984 to 1987 before becoming a Minister after the 1987 election, becoming Social Welfare Minister and Associate Finance Minister.

He became Labour Party Deputy Leader in 1996, and when Labour returned to Government in 1999 he became Minister of Finance, and from 2002 onwards Deputy Prime Minister, along with a number of other portfolios including Attorney General. He retired from politics after the 2008 election and continued his public service through a variety of roles as the Chair of New Zealand Post, the Constitutional Advisory Group, the Tax Working Group, the Earthquake Commission and as a negotiator on behalf of various iwi including Ngati Tuwharetoa.

“His contribution to New Zealand’s long-term economic prosperity and stability has been enormous. As the architect of KiwiSaver, the New Zealand Super Fund and Working For Families he has left behind an economically more secure country,” Deputy Prime Minister Grant Robertson said.

“Each of these policies on their own would define a political career, but taken together they represent one of the most significant contributions any politician has made in recent times.

“But for Michael they are only part of his extraordinary contribution to New Zealand. His tenure as Minister of Finance saw New Zealand have among the lowest unemployment in the OECD, strong economic growth rates and one of the lowest levels of public debt in the world.

“While many people will know of these achievements, it is also Michael’s small acts of kindness that I will remember. He was always ready with a piece of advice, an insight or just a funny story. He also helped many Labour MPs out, often behind the scenes, and not wanting any publicity.

“He was loyal to the Labour Party, but also not afraid to voice his concerns. I can recall a number of more recent Labour Party Conferences where he would pop up to speak and introduce himself as  “a member of the Whakatane Branch” to make a wise and decisive intervention. He maintained his interest and commitment to the causes he believed in for his whole political life,” Grant Robertson said.

And here's a statement from National Party leader Judith Collins.

“Sir Michael was a consummate politician – a respected adversary and a man of absolute conviction.

“But, most importantly, he was a man of uncommon and uncompromising principle. When he retired from politics in 2009, such was our respect for him we called on his vast skills and knowledge to chair New Zealand Post and Kiwibank, as well as appointing him to lead a wide-ranging review of New Zealand’s intelligence agencies.

“He will be remembered as one of our most effective ministers of finance, with a long-term view of what needed to be done to enhance to New Zealand’s economic and social prosperity and stability. His passion was to make New Zealand a better place for everyone.

“Sir Michael’s keen intellect, wit and vast expertise will be missed by us all, and our thoughts and condolences are with his family.”

Much respect for a finance minister (and deputy Prime Minister) with intellect, economic nous and a social conviction . . . with cross party respect.

The superannuation scheme is a great legacy and a huge gain for the country. However, I don't agree with WFF being a positive policy as I think it's been captured and exploited by the 'land-leeches'. I'd much prefer it to be phased out over time so people doing the work we can stop subsidizing them.

WFF was continued by successive National Governments because it's effectively a massive wage/salary subsidy for businesses paid by all NZdrs through their tax ed s, including GST.

Unfortunately these sorts of things are almost impossible to roll back on, politically.

It's not the done thing to knock a recent decedent so I'll tread carefully: Big ticks for Kiwisaver and agreeing to Kiwibank following Jim Anderton's push for a locally owned bank. Massive thumbs down for WFF. State sanctioned welfare that will be near impossible to remove. And can't forget his 'rich pricks' comment directed to Brash when a few years later he would become Chair of NZ Post.

So given Winston Peter's age and possible demise can I preempt a eulogy? "Sold out his voter base to get a Deputy PM role. Forever remembered as 'self-above all' and buying votes with a provincial growth fund. Often deemed witty when in fact it masked arrogance. Good riddance."

The rich prick comment was directed at John Key, who Cullen actually got on well with outside the debating chamber I believe.

He won on merit a scholarship to Christ’s College where he became Dux by a country mile. Yet he turned on the college in a most spiteful manner in his introductory speech to parliament. That sort of sums up the contradictions of the man. Undisputed intellect, and keenly analytical but that talent could readily stoop to the most appalling gutter sniping. Kiwi Saver & the Superfund though are well merited bulls eyes. Throwing the toys out the window and jumping after them with Clark after the ungrateful electorate voted them out in 2009 a black eye in my book though. Think he & Clark, and actually Key too, thought they were all each a bit bigger than the job itself. Anyway as David Lange put it, we all just end up as fly speck on the myriad wallpaper of world history.

Giant intellect, not sure it was used to best effect.

Perhaps Overton Window-constrained, maybe someone will record that in long hindsight. And maybe we'll be too busy to bother........

Now, not so much.

A fine man and brave at that. Was not scared of his terminal diagnosis and used it to promote the end of life choice bill. I hope he passed on his terms.

RIP Sir and thank you for your many years of service to the country.

Very sad news. Fantastic legacy with KiwiSaver. Condolences to all his family. He will not be forgotten, certainly with the intererst.co.nz community.

Not a fan but RIP sir

Sad for his family who won't be able to farewell him properly because of covid restrictions. That's tragic and sad.

RIP - he faced his illness with courage and dignity..his last interview on RNZ is worth listening to for a perspective on life

Kiwisaver will be his legacy......less said about WFF the better - it so infuriated me, I could never get my head around it (interesting that no-one including JK would get rid off though?)

I usually disagreed with him politically, but having said that is there anyone on either side of the house with half the intellect or actual belief in his convictions like he had?

Some wonderful achievements for NZ, what a shame he wasn't able to have called himself PM, I can only imagine what he would have achieved in that position, but I feel it could have been monumental. RIP Sir Cullen.

A sad day for NZ.

Had a chance to implement a pragmatic CGT and went for ideology instead.

Had the chance to do so several times as Minister of Finance during several income tax act rewrites too. Did not. Didn't matter at all until Labour were in opposition, and then it was urgently needed and neglectful not to have one, according to some of his associates. I sometimes wonder what NZ would be like as a country if Labour took the same opportunities National seem to be so widely slammed for missing.

A very articulate man, a very smart man, but an ideologue who presided over some severe social ills that developed under his watch, and the emergence of a disconnected bureaucratic class, who got paid well no matter how little the country progressed. So often these people get more pragmatic and realistic as they age and their input still carries a lot of weight - so we may have been robbed of the best he had to offer as an elder statesman.

Well said GV. His qualities as a leader, human, thinker cannot be dismissed and we should honor him for those qualities. But we should not forget that he was part of the ruling elite dysfunction that has outsized negative impacts on many NZers.

Before wff, a parent with children was better off on the dole than working. I worked wit a guy who got less money on the job than he did on the dole.

Legend in some ways. Human in many ways. I have always liked his poise and clarity of thought. He made a good beneficial impact on NZ's finances, financial literacy of many New Zealanders. A good bloke.

His legacy will include "...Michael Cullen advises Labour to ditch Auckland light rail for electric buses...."
When he was not beholden to any party politics, he started talking real sense...
His opinion on this will no doubt be swept under the rug....