New Zealand respondents to a global survey see credit risk as the biggest potential banana skin for the banking industry, auditing and financial advisory firm PwC says, reflecting the NZ$3.9 billion worth of impaired asset charges taken by this country's big five banks over the past three years.

The bi-annual survey Global Banking Banana Skins 2012 by London-based think tank the Centre for the Study of Financial Innovation in association with PwC, includes respondents from New Zealand for the first time. The poll of 700 bankers, bank regulators and "close observers of the banking scene" from 58 countries was conducted in November and December last year and includes 22 New Zealand respondents.

The top five banana skins identified by the New Zealanders (in order) were credit risk, liquidity, macro-economic risk, political interference and capital availability. These were the same as the global top five although internationally the order was different with macro-economic risk first followed by credit risk, liquidity, capital availability and political interference.

In Australia, where leading politicians and bank bosses regularly clash in the media, regulation was rated the top banana skin followed by macro-economic risk, political interference, credit risk and a high dependency on technology.

PwC financial services partner Sam Shuttleworth said overall it was unquestionably the bleakest response seen in more than 13 years of Banking Banana Skins reports, highlighting huge short-term uncertainty including that stemming from the Eurozone sovereign debt crisis, but also the certainty that changes are needed to restore stability and global economic growth in the longer-term. 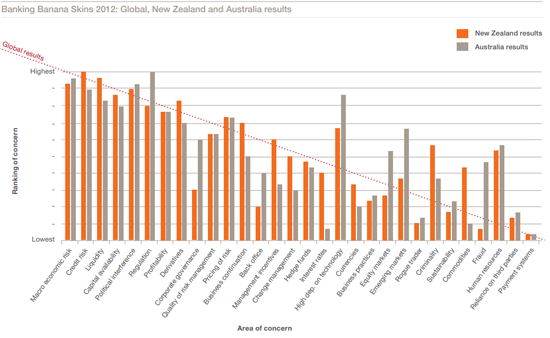 The nominating of credit risk as the biggest concern by New Zealand respondents comes after the big four banks slashed their combined 2011 financial year provisions for credit impairment by NZ$474 million, or 42%, to NZ$646 million from NZ$1.12 billion in 2010. This dramatic drop in impairments helped the big four - ANZ New Zealand, ASB, BNZ and Westpac New Zealand - deliver a combined annual profit after tax of NZ$2.778 billion, up NZ$78 million, or 3%, even on their boom 2007 year.

However, PwC notes the nomination of credit risk as the top banana skin is unsurprising given the high level of asset charges recognised by the New Zealand banks since 2009. Total impaired asset charges, including provisioning movements, for the big four plus Kiwibank over the past three financial years totalled NZ$3.9 billion, or 38% of net profit before tax.

Shuttleworth told interest.co.nz banks have taken a lot of the pain for problematic loan exposures since the onset of the global financial crisis (GFC).

"What we've seen over the last three years is a process where a work out scenario has been required to rehabilitate problematic loans," Shuttleworth said. "And what we've seen in the stats is that slowly but surely, and more recently, the number of impaired loans has started to reduce."

"The report here is focusing on what is concerning the global industry and also a New Zealand perspective, given what we've come through, and we've seen what the last recession did in New Zealand to a number of corporates and the household sector. This is why credit risk is still seen as quite a high concern."

Shuttleworth said he didn't anticipate banks tipping an increasing number of borrowers into receivership or liquidation if times get tougher and they struggle further with repayments.

"Putting an entity into receivership or liquidation is typically the last resort," Shuttleworth said.

"I suspect the stats would suggest the best way to remedy a problematic loan is to work with them (the borrower) and if you can't and you've exhausted every other option, I guess receivership or liquidation is the last resort. But it's unlikely that would be the first option because when you're dealing with a market with depressed asset values, you're not going to get the same recovery on a fire sale basis than if you work with them."

Meanwhile, Shuttleworth said the thing that really jumped out of the survey for him was the top five risks identified by New Zealand participants matched the top five identified globally.

Global concerns about credit risk have switched from real estate, commercial and consumer credit in 2010, to sovereign debt in both the industrialised world and emerging countries in the latest survey.

"At the top of list is the Eurozone, for the scale of the risk and the hesitancy of the political response. The contagion risk of the European sovereign crisis spilling over into a ‘GFC II’ for the banking industry was a concern shared by the survey respondents," PwC said.

PwC is auditor for ASB, Kiwibank and Westpac NZ.

"In general, the Nordic and Baltic governments are amazed by what they view as a combination of arrogance, incompetence, madness, and slowness in Brussels, Paris, Berlin, and London. ...... These countries are run by people who know how to handle crises, but they are effectively excluded from EU decision making"

You would be foolish to think that EU bureaucrats are incapable in a crisis. The only difference is that Nordic and Baltic governments supporters see it as a crisis effecting them, the supporters of bureaucrats and politicians in Brussels, Paris, Berlin and London see it as an opportunity of which they can take advantage.

We have nothing to worry about..carry on borrowing all you can....it's the Kiwi way to greater misery and fatter bank profits on the back of seriously flawed govt policies designed to proect bubbles in property and rural land....that's what the Crafar crap was all about...

Lesson one for all the kiddies...you can buy whatever you want in the school tuck shop because it's all on credit and you only ever have to pay the interest on the total splurge...and if you run up a monster bill you can have it paid off by your classmates...spend and splurge kids...eat all you want...no worries....it's how your parents behave.

On the verge of collapse, when man become a real problem.

..and on top of all economic/ financial/ environmental/ social/ etc. problems, they have enough time and money for lust of war against Iran – how stupid these leaders are:

Think about this equation in light of ultimate control. Oil is the fuel that runs the engine of all economies. Money is the medium of exchange that pays for the petroleum. War is the universal method used to avoid the breakdown of the money recycling system.

Off to Teheran for the spring festival of democratic enlightenment are we Walter...give Madjad a big hug. Mind you don't stumble over one of those fat Swiss bank accounts stuffed full by the Iranian ayotollah flakes.

Wolly – just read/ comment the article, how it stands and don’t add some “male emotions” to be hypocritical, the situation is bad enough.

Fat chance, for Wolly the rhetoric is in the name calling.... you just have to fill in the....