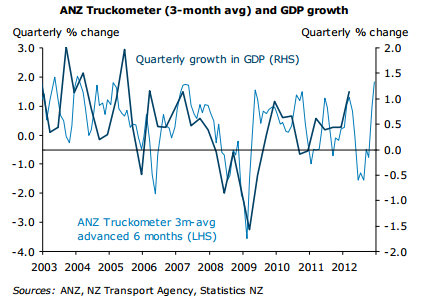 ANZ's Truckometer is flagging growth of about 1% in the December quarter, picking up from a mid-year pothole

Three economic indicators released on Thursday point to subdued growth readings through the middle months of the year.

Economic growth should pick up again towards the end of 2012 after a bumper expansion in the first quarter was likely to be followed by weaker readings in the middle six months of the year, ANZ said when releasing its monthly Truckometer series on Thursday morning.

Meanwhile, the latest monthly BNZ-Business New Zealand Performance of Manufacturing Index for June pointed to a slowdown in expansion in the sector. That indicated manufacturing GDP in the June quarter would not be as strong as in the first three months of the year, BNZ said.

And ANZ's monthly Consumer Confidence Index released on Thursday afternoon showed consumers were less optimistic about future economic conditions than they felt about current conditions, the first time this had been the case since during the 2008 recession.

ANZ said its composite growth indicator, a combination of readings from its Business and Consumer Confidence surveys, was flagging 2.4% annual growth following today's release. This was likely to fall over coming months if consumer confidence did not show a "decent climb" from its current levels, ANZ said.

Mid-year pothole, but growth to pick up

ANZ's monthly Truckometer series - a six-month leading indicator of quarterly GDP growth, based on traffic volume data - fell 1.9% in June, holding on to half its sharp rise in May, ANZ economist Sharon Zollner said.

The headline reading suggested the March quarter's 1.1% growth would be followed by a weaker GDP outturn in the second quarter of the year, with some of that weakness persisting into the third quarter, before a rebound in quarterly growth to about 1% in the fourth quarter, Zollner said.

"We are therefore left with a mixed story for Q2 – weak base economic momentum “saved” to some extent by extremely strong primary production. We’ll have to wait for Q2’s partial indicators to get the full story," she said. GDP figures for the June quarter will be released by Statistics New Zealand on September 20.

However the latest readings suggested a rebound in momentum towards the end of the year, pointing to quarterly growth of about 1% in the final three months of 2012.

"Whether this is realised will depend on whether good intentions get derailed by the fallout from Europe’s slow train wreck," Zollner said.

"There is a lot going on in the New Zealand economy at present. Prudent debt repayment is going head to head with a broadening housing market upswing. An exceptional growing season has now come to an end; the global outlook is worsening; commodity prices are volatile; an earthquake rebuild is pending," she said.

"It makes for confusing times and mixed messages. The messages coming from traffic flows are also mixed at present. But it is certainly encouraging that the downward trend in the Truckometer evident at the end of last year now looks more like a pothole than the start of a slippery slope."

While the index had been volatile in recent months, the trends remained positive, Steel said.

"Not strong by any stretch and they have tempered a bit in Q2 compared to Q1. For example, the PMI averaged 51.2 through Q2, not quite as firm as the 54.2 average in Q1," Steel said.

"This suggests manufacturing GDP in Q2 will not repeat its hefty 1.8% expansion recorded in Q1. Not that we ever thought it would. But the above 50 readings in the PMI do suggest a bit more growth in Q2, along the lines of the reasonable 0.5% expansion we currently have on the board. We’ll find out what the official statistics say when released toward the end of September," he said.

The metal and non-metallic mineral product manufacturing industries stood out on the strong side in June, Steel said.

"Both industries’ PMI were driven by new orders and production and may reflect the beginning of some traction in the long anticipated improvement in domestic construction. Let’s hope so because, in general, there were still many negative respondent comments regarding the current very weak state of construction," he said.

"We anticipate a strong pick up in construction ahead. Residential building consents are now well off their lows, although you could hardly call them strong yet. Anyway, forecasts are one thing, consents are another, but it is activity that matters.

"That’s why we were encouraged to see signs that the recent upward trend in building consents is starting to translate into actual construction activity, judging by builders’ responses to the Quarterly Survey of Business Opinion (QSBO) released by NZIER this week," Steel said.

"In fact, QSBO builders’ output and new order indicators posted their highest readings in more than seven years; likewise for builders’ overtime worked and productivity. It is important to note that these are indicators of change. So they represent improvement from a low base rather than outright strength. But it is heartening to see movement in the right direction," he said.

There were some weak parts in the June PMI details too: One was a particularly big drop, and to a low level, in the PMI for large firms (101+ employees).

"This was in marked contrast to the mild decline and more average looking results across all other firm size categories. It is also completely contrary to a general theme over the past few years where the PMI for larger firms has been stronger than that for smaller firms," Steel said.

"Still, we are not reading much into just one month’s result. It could well prove temporary like previous similar results back in April 2011 and August 2010, or like the various extreme positive results we have also seen in the past," he said.

A possible candidate for the biggest driver of June's decline might have been weaker export markets, given that larger firms were more likely to be exposed to international markets than smaller firms.

"This seems plausible given heightened growth concerns pervading many overseas markets at present. A strong bounce in the NZ dollar over the past month strengthens the case," Steel said.

"But the QSBO manufacturing export indicators do not support the notion. Manufacturers in that survey indicated both higher export sales in the past three months and expect higher export sales in the coming three months. Moreover, both these variables are close to their long term averages and recent movements have not been unusual. So, the June PMI drop for large firms remains a curiosity. It will be interesting to see what the July survey brings. This applies to large firms and the overall results alike," he said.

"Looking further ahead, we are certainly of the view that an improving domestic construction sector, ongoing international market challenges and generally high currency will be some of the important macro economic influences for the manufacturing sector to roll with," Steel said.

"Also, getting larger on the horizon is the growing threat of El Nino weather conditions. One indicator of such, the Southern Oscillation Index, has just dipped into El Nino territory. El Nino weather conditions have the potential to dent primary production especially from last season’s strong result, with follow on effects for food processors. It could matter for others too, to the extent that El Nino conditions might affect hydro lake levels and the wholesale electricity market," he said.

"Ah, the weather, yet another factor to keep an eye on in a world of many moving parts."

The third economic indicator released on Thursday was ANZ's Consumer Confidence Index. ANZ said its headline index regained some of the June fall in July, but consumers remained wary about the economy. The headline current conditions measure rose from 105.8 in June to 110.5 in July, while the Future Conditions index rose by 4 points to 110.

"The more things change, the more they stay the same. Consumer confidence has been bouncing along a flat trend for over a year now – at a level that shows consumers remain wary," ANZ's Zollner said.

"Subsequent falls in readings from the Business Outlook survey suggest it is likely to fall over coming months, however, unless we see a decent climb in consumer confidence from here," Zollner said.

Other points of note were that confidence amongst both males and female respondents rose, but that of females rose more (by 5 points versus 4), having fallen by more in June. Confidence of those aged under 25 continued to deteriorate.

"This group is the least likely to benefit from rising house prices, which may be a factor. The confidence of those aged 18-24 is the lowest it has been this year," Zollner said.

"Confidence amongst all those aged 25+ rose, with those aged 25-34 rising the most. Those aged 50 years or older remain the least confident," she said.

Confidence fell 6 points in Wellington, but rose in the other four regions.

"Wellington confidence (100.2) is at its lowest since March 2009, and is the most pessimistic of all the regions. Auckland (115.8) was the most optimistic region for the second month in a row, continuing its tussle with Canterbury (109.8) for the top spot," Zollner said.

"Inflation expectations fell markedly from 3.7 to 3.3 percent, their lowest level this year. Expected lifts in house prices fell from 3.5 to 3.2 percent, but in a broad trend sense have been steadily increasing since the question was first asked in October 2010," she said. 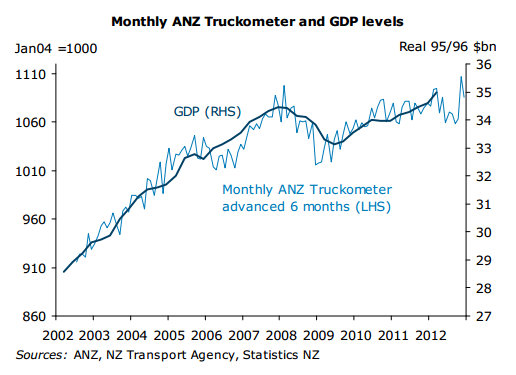