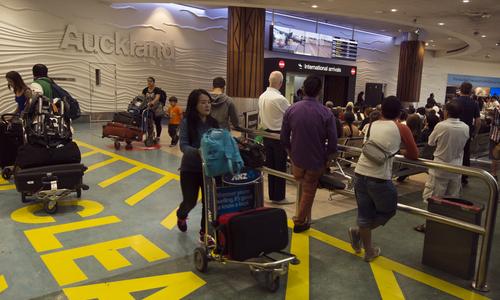 Soaring rates of net immigration in New Zealand might pose a risk of 'reigniting' the housing market and putting pressure on inflation, according to an economist.

Statistics New Zealand said there was a seasonally adjusted net gain (more arrivals than departures) of 3500 migrants in February 2014, which was the highest monthly gain since April 2003 when there were also around 3500.

The big rise in net migration that's occurring - and strengthening - is due mainly to fewer Kiwis leaving, particularly for Australia, but also due to more people arriving too.

For the year to February there was a net gain of migrants of just under 30,000.

If you take the last three months-worth of seasonally-adjusted figures, however, the net rate of inbound migration is currently running at an annualised 38,000, which is getting close to all-time highs. That annualised figure has been rising in recent months. In each of the past three months the seasonally-adjusted number of net migrants has been higher than the month before.

The rising numbers of migrants, with a large proportion of them settling in Auckland, are seen as likely putting more pressure on the housing market.

Deutsche Bank's Gibbs said based on the annualised rate of increase of 38,000 in the past three months this would be sufficient to drive 0.8% annual population growth even before growth through natural increase.

"It is worth recalling that the [Reserve Bank's] March MPS [Monetary Policy Statement] projections assumed that annual net migrant inflows peak in Q3 this year at just under 30,000.

"Even if we were to assume that migrant inflows have peaked in February it seems likely that the RBNZ’s assumption will prove too conservative.

"Indeed, strong inwards migration has seemingly been one of the reasons for the [Reserve Bank] adopting an increasingly hawkish stance over the last year or so.

"If migration continues at the pace seen in February (or even strengthens further) over the rest of the year, both us [ASB] and the RBNZ would need to revise up our migration forecasts slightly.

"Strong inwards migration will continue to add to domestic demand and housing market pressures, and is one of the reasons why interest rates will rise over the next couple of years. We continue to expect the OCR will rise by 25bps in April, July and December this year, with another 100bps of hikes over 2015 taking the OCR to a peak of 4.5%."

The seasonally adjusted net loss of 600 migrants to Australia in February 2014 was below the average net loss of 1000 over the last six months. This average was well down from the recent high of 3700 recorded in September 2011.

Chinese migrants exceed those from UK

The net gain of migrants from China has surpassed that from the United Kingdom for the first time in a decade, Stats NZ said.

The net gain of migrants from China was higher than the United Kingdom's from the March 1996 year to the January 2004 year.

In the year, nine of New Zealand's 16 regions had net gains of migrants, led by Auckland (13,700), Canterbury (5100), Otago (600), and Wellington (400). The biggest net gains, by occupation, were professionals for Auckland and Wellington, technicians and trades workers for Canterbury, and community and personal service workers for Otago.

This will be fodder for Winston Peters Election campaign...

Anyone has stats on the total number of ppl with NZ passports/resident visa that live outside NZ? about 2 million ppl?

Imagine a day when they all come back home to develope NZ. sounds pretty good.

Sounds horrendous to me Xing, But if you fancy living in high rise, soul-less overcrowded cities there are plenty of them around the world that should suit

Roll out the red carpet.

I just hope some of them know how to swing a hammer.

You reckon?
Direct quote: a larger percentage of Chinese migrants are in the 50-years-and-older age group
Ready-made addition to the next wave of pensioners and gold card holders

Isn't there some rules regarding NZ superannuation?  Corect me if I am wrong but one can't just bowl along to the local NZ Work and Income and sign up to receive pension!

...have a quiet word with a health professional in your local hospital.  You wil find there is dismay at the increasing numbers of sick and aging migrants who are enjoying the fruits of our health system. Some very ill people due to lack of treatment for progressive illnesses that have remained untreated for a life time. Very expensive stuff.  But hey...the kids have migrated so lets bring the extended family too.

More fodder to keep wages down and property prices up ...... just bliss for the international banker,  say what ol' boy

Just think of all that moolah coming in with them, pumping up the economy and providing me with an even greater pool of cash buyers and tenants ......I don't care, it's all income to me... ...and I don't even live there......haw haw !

But it makes for a cracking great read and good for one's soul on a balmy, trade wind filled Thursday afternoon here on the shores of beautiful Kaanapali Beach.... :)

A fine job ol' boy (and boyesses to be politically correct)  ..... I'll buy the next round of single malts at the Northern Club when I am down that way....say what.

Toodle pip for now and enjoy your weekend in mortgage and rental serfdom......haw haw

Migration is good for us  , like beer or wine .
But if you have too much it can be damaging to you in the long term .
Without a clear plan to allow for the orderly expansion of Auckland , we are facing unintended , yet well articulated , potential consequences

I declare that the optimal size of population for NZ is 20 million.

with or without fossil fuels?

with or without global growth-based finance imploding permanently?

with or without global war(s) over what's left?

and I've got more if you can answer that lot irrefutably.

We are about at our optinal size and NZers do NOT want 20million people, again if you want that there are other countries that already have more than enough people, you could go live there rather than advocate that we turn into one of them. No thanks

We need quality migrants.  With unemployment at 6% and trending down, there is a good percentage of these who are unemployable.  Migration needs to be managed so that the points system makes people migrate to the provinces and not just settle in Auckland.  We need young migrants to pay for our fast inflating demographic time-bomb.

I don't think all the people that became unemployed since 2008 (when unemployment was 3.5%) can legimately be described as unemployable as they clearly had jobs then. There is also still a big amount of slack in the number of people in full time jobs, which I think is a better measure of amount of potential work capacity going in the country.

Even if this monthly rate was sustained if it would take 70 years for our population to double to around 9 million.

These immigration numbers really are poor. The government needs to take action swiftly and make access easier for people to achieve.
I think the government could do more to advertise New Zealand to the rest of the world too.
How about some ads placed in various media, all around the world? The merits of New Zealand could be highlighted and potential immigrants blatantly told "New Zealand wants you... apply now."
It works for Australia.

Why are these numbers really poor YL ?

Speaking from an Auckland point of view, there is not the infrastructure to cater for them at the moment ....ever driven on the Southern motorway on a weekday around 4pm ???

Also when they compare the business opportunities, cost of living, salaries (if they can get a job in their profession here ....too many taxi drivers already) and the cost of housing etc here ....as compared with the USA , I know where they will choose and it ain't Blockhouse Bay......more like Brooklyn or Brentwood !

Probably from where you stand it's all good for you, as it just props up the property market ....but until this government realises all this housing investment is just stifling growth and productivity here in Aotearoa.... as it has been said on here before ....WE ARE STUFFED.

YL,
20 million? Rubbish.
Yet another unsubstantuated statement.
Take Australia for example. They have already virtually run out of water for their cities. That is just one reason for them to stop.
In NZ the capital requirements for services are huge and presumably YL would do it on money borrowed from offshore, yet again adding to our pressures.
As noted above, we are already at the point where natural increase is as much as we can deal with. If we have to have any more they should voluntarily go to the South Island and stay there for five years or leave again.

Your Landlord, absolutely, utterly NO, NO, NO. You might want them so you can make more money, well, too damned bad

Do what the Aussies do , if you want to migrate from UK to Aus as a Doctor , you have to go to a place the name of which you cant pronounce and the locals cant spell and cannot be found on the map

New Zealanders and New Zealand is largely considered a joke but most Asian people I have met in Aisa.
They simply cannot believe that once into New Zealand that you get FREE healthcare and A PENSION, even though you have not contributed to NZ society in any way. Hey NZ will even PAY YOU if you can’t be bothered getting a job.
Is sounds like heaven, and that’s because it is. No other country offers this.  And what’s the effect on the NZer’s? Well for a start we cannot afford the average house on the average wage, in the only places where there are jobs. We are becoming renters in our own country.
By the time “dumb-ass” NZ wakes up to find they are bankrupt for these idiotic policys, it will be too late. And If you think what I have said above is racist, then try living in an Asian city sometime, and find out what you are entitled to as a “citizen" or "permanent resident”.

Intelligent NZers woke up a long time ago, the rest are waking up bit by bit, if a bit slow, it is the dumb-ass government that needs to wake up.