Our economy is growing, but is our bank debt growing too fast in support? We update the internationally recognised benchmark used to test the prudence of our financial system

Our economy is growing, but is our bank debt growing too fast in support? We update the internationally recognised benchmark used to test the prudence of our financial system 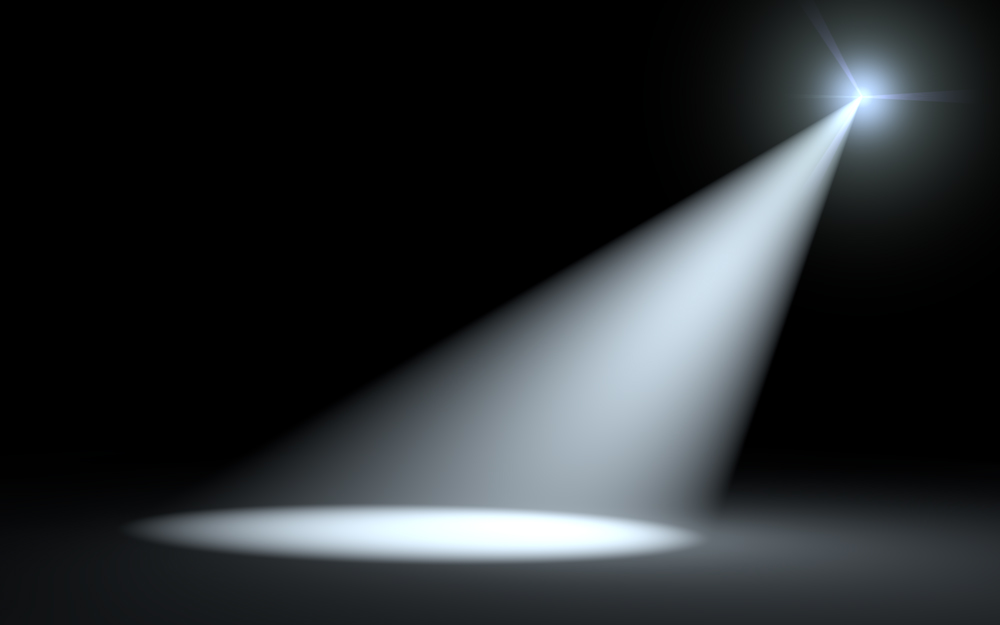 Last week we noted a report in the FT that China's reliance on bank debt to fund its economy had breached a notable benchmark.

Bank 'assets' (primarily loans) are now more than three times the level of economic output - as measured by GDP.

Most analysts consider this excessive*. But China is not alone at that level; many European countries like Switzerland (4.6x), Ireland (4.2x), France (3.9x) and the UK (3.75x) all have a higher exposure.

All the same, levels above 3x are considered excessive and carry heightened financial stability risk.

Now that we know the full December GDP data, we can calculate New Zealand's growth of bank 'assets' and GDP. 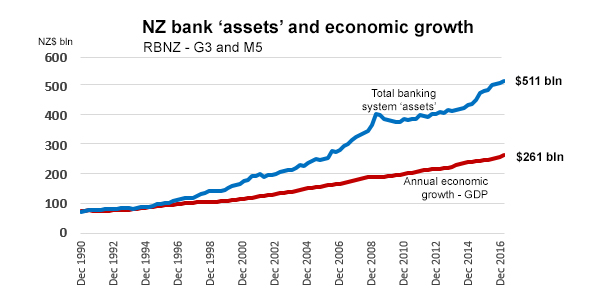 It turns out that before 1997 both measures were at similar levels.

But they have continued to diverge with 'debt' growing faster than the nominal economy.

However, the ratio seems to rise to a new higher level each decade: 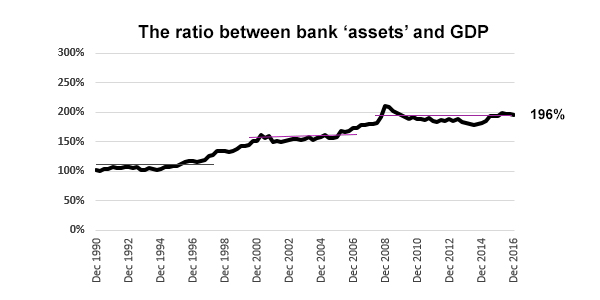 (Data for New Zealand is sourced from the RBNZ, G3 and M5.)

And perhaps we are about to see another rise in this ratio. We have absorbed the 200% level now for eight years with little change.

Compared with Australia we are in relatively better shape. Our problem is that we are exposed to their economy much more than they are to ours.

(And that goes as much for China too.) 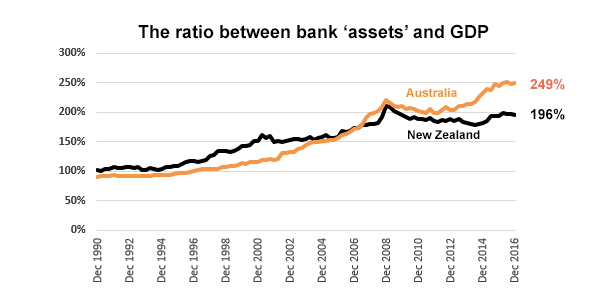 But the central driver of the world economy is nowhere near as exposed to this type of excessive lending: 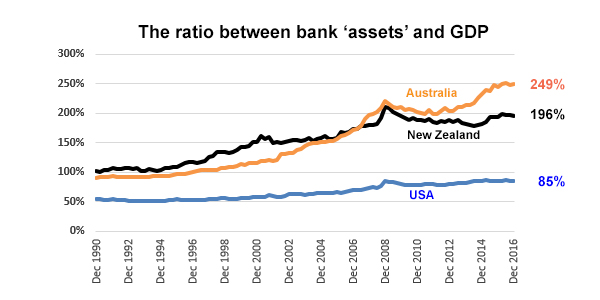 The data for the USA is sourced from statistics published by the Federal Reserve (H8), and the BEA (nominal).

Maybe hard to believe, but the giant banks in the USA just don't dominate their economy in the way ours do. Not even close.

* This ratio is equally problematic when it is too low.

That last comparison chart doesn't make sense to me.

Does it include the shadow banking sector in the US?

Shadow banking has grown in importance to rival traditional depository banking, and was a primary factor in the subprime mortgage crisis of 2007-2008 and the global recession that followed.

David Chaston, are you able to confirm whether or not the shadow banking sector in the US is included in that last chart? If not - an update with a further chart would be really interesting as a further comparison.

Kate: sorry about late response. The interest.co.nz team has been out all day 'meeting'.

The Total Assets are 'only' as reported in the Fed's H8 stats release. 'Shadow banking' is variously defined, and I have seen reference that 70% of 'shadow banking' is being done within the US commercial banks. (But I haven't read the tome that gives the detail.)

Fed H8 does include US$2.5 tln of "Treasury and agency securities" which includes mortgage-backed securities. Just don't know whether this is the 70% or not.

But I suspect what is referred to as 'shadow banking' is believed to be much more than USA$2.5 tln. So that probably means the answer is 'no'.

There is a problem with updating the chart as you want - and that is, where do we source the detail and histoiry of something as loosely defined as 'shadow banking'. As an extreme, I presume you would not want included trade credit from one supplier to another, even though this is in fact a credit loan'. There are no reliable stats on that, and non that I know of of anything in between that and what banks are required to report to the Fed.

Maybe Stephen Hulme can help on the matter?

Thanks, really appreciate the explanation. Perhaps Stephen will be able to help. Cheers.

Kate, the numbers are hard to source as the Fed found out prior to cancelling M3 releases, a while back.

Eurodollar credit creation can be undertaken by a Japanese bank or a Swiss one for that matter, but central banks, and particularly the Fed, decline to extend their regulatory purview beyond their own borders. Hence, JP Morgan London can create as much USD fungible Eurodollar debt and associated money like derivatives, or not, without impediment, apparently.

Nonetheless, an excellent background study funded by the Fed, together with excellent graphics detailing eligible instruments and chains etc, can be found here.

Thanks for the links! Cheers.

This is my view .... but I'm not at all sure..
Shadow banking and normal Banking kinda merge and intermingle ... ie.. Transactional accts are always with Banks that are part of the payment system.

I see the shadow Banking system primarily as having the ability to create credit thru the the mechanism of "derivatives"... but it is a different kinda "credit" ... Its' not as fungible with money as the credit created by the Banking system... ie.. we dont use derivatives in the same way we use credit money..

Is this because the $US is the reserve currency, and Private sector borrows offshore..???

I think that is just becuase there is much more funding going on in the US bond market by corporates, and lending by MM funds. These are 'normal' features of their market that can be sustaimned because there are so many large, investment grade corporate borrowers. Treasurers in them are sophisticated enough to go directly to the source of the funds through such markets, rather than using bankls as intermediary conduits to accessess them.

Major commercial banks in the US just don't have the dominant position we assume is normal here. There are alternatives.

I doubt it is anything to do with the reserve currency statuis. And I doubt the offshorte aspect too. The US markets are large enough to supply the funding needed. Offshore sourcing  will only be a small corner of their requirements.

The difference is about $17 trillion dollars ...which happens to be about the value of total foreign holdings of US securities
http://ticdata.treasury.gov/Publish/shlprelim.html

That would tend to support Stephens assertion of Eurodollar credit creation...

PS... I think this chart series comparison idea of yours is brilliant... It would go well in the weekend edition of the herald...??? It deserves a wider audience.... At the least it would be great PR for you... ( I recall , thats how Brian gaynor got a foothold )
Its a shame they disappear into the internet wasteland after only a day or so...

Alternatively the USA can achieve much more with much less

We should attract more Mexican Immigrants to NZ

US rates are usually lower than their kiwi counterparts so wouldn't that mean they can handle servicing more loans?

Here is a link showing how there are diminishing returns to evermore debt.. ..scroll down to see the charts.

Can someone explain me why it's important to compare GDP with debt ? I assume it would be based on the need to borrow funds to grow business, hence the Economy but isn't most of the debt growth going into assets ? If so is it an important correlation ? Thanks

The perspective I prefer is that the total expenditure and income in the economy is the sum of the turnover of existing money, plus the change in private debt.

Perpetual growth of debt at rates above the rate of growth in GDP is unsustainable.
Moreover the credit growth from banks is pure money creation, so it seems that nearly $13B/yr of current economic activity in NZ is illusory, an artifact of loose regulation allowing excess money creation, and being unsustainable will soon lead to real problems when that $13B/yr vanishes.

GDP represents the Nations.." Income"...
Comparing the two is helpful in giving an idea of debt/income situation.... and what we are doing with new credit.

New debt/credit entering an economy can only be used for 3 things:

The more indebted one is, the less..."umph" new debt has on maintaining your lifestyle.... especially if u have simply been living beyond your means..!

To be sustainable, debt growth has to, kinda, be in line with income growth ( nominal GDP )

There was a major article in The Economist about a year ago, where it bemoaned how tax system throughout the developed world encourages debt. eg in the US, interest on housing loans is tax deductible. Therefore debt has burgeoned for years. The result is debt-fuelled growth, beloved of politicians as it is an easy "fix" without having to resort to structural reforms.

The NZ system wasn't mentioned. However obviously the ability to make interest payments for landlords deductible from their tax, without having a commensurate tax on their capital gains, rewards debt.