National may have won back support last week; Newshub poll shows them able to govern alone; Labour down slightly, Greens below 5%

National may have won back support last week; Newshub poll shows them able to govern alone; Labour down slightly, Greens below 5% 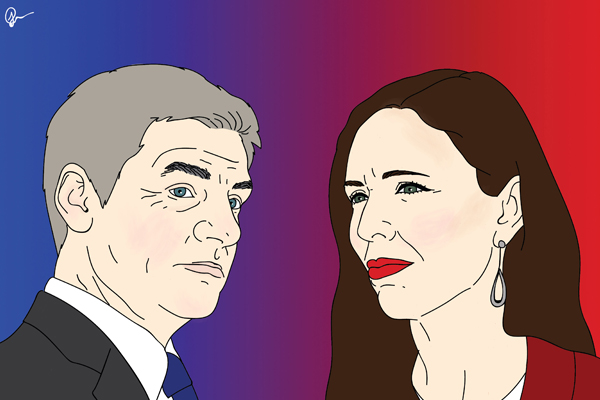 The last few weeks of the election campaign were always going to be a roller-coaster.

The latest Newshub Reid Research poll has thrown out another curve-ball, showing National and Bill English strengthening to a position to be able to govern alone and Labour's momentum perhaps hitting its buffers.

National was up four points to 47.3%, giving it 61 seats in a 121-seat Parliament. Labour was 10 points behind on 37.8%, down 1.6 points. New Zealand First was down 0.6 at 6.0%, and the Greens down 1.2 at 4.9% - missing out on Parliament so boosting the wasted vote and allowing National to govern alone. Jacinda Ardern told Newshub that Labour's numbers showed the Greens slightly stronger.

The poll was conducted between 6 and 11 September - so encompassed Steven Joyce's fiscal hole claims, and the many rebuttals. The margin of error was 3.1%.

That margin of error might help explain National's strength - Bill English said the polling they were getting showed the two parties more neck-and-neck, with National slightly lower than what the poll indicated.

Bill English strengthened his standing as preferred Prime Minister, at 33.1%. So did Ardern, up slightly to 31.7%.

The poll contrasts greatly with the recent 1 News Colmar Brunton, which had Labour ahead of National and in a position to choose between governing with either the Greens and Maori Party, or New Zealand First.

I think anyone is a tax expert compared to Jacinda Ardern.

Nine years to come up with something and they can’t make a decision.

Five leaders in 9 years is all they have achieved, their supporters know deep down that they are not fit to govern. However they will continue to try and bluff the public.

What a shambles of a party.

You talking about National's handling of the housing crisis they campaigned on?

They won't save you.

Even if Labour come clean on their ‘real’ taxation policy it will be too little too late.

Their goose is cooked!

Life isn't fair, it never has been and it never will be.

I think the election is going to be very close as there are a lot of people who will vote for change just for the sheer hell of it!
Voting out a successful government that has offered stability is blatantly stupid, and if anyone thinks that Labour will improve NZ going into the future is totally deluded.
Wondering why Grant Robertson who is Labour's finance minister, is not being questioned on financial matters?
Obvious answer would appear to be is that he would not be able to answer the questions but somehow people beleive that Jacinda is some answer to their problems.
Better health, better education etc. but no details whatsoever.
Blatant empty policies with no substance and at the end of the day Jacinda Ardern had no intention to lead Labour but because Labour were going to finish second, their leader was voted out at a last resort.
Stability in the Labour Party, NAH!!!!

Because National has never suddenly changed its leader in the recent past?

And National have done what exactly - nothing. They now admit there is child poverty where there was none before - how many other untruths have been told by National.

Stability - Fear Psychology the only card that national can play to win.

Important how many people get carried away by the fear to follow the path of denial, lie and manipulation followed by national.

Tax is pretty concrete in its affect on your bank account.

Then front up Labour on your tax policy rather than think everyone in this country is a half wit!

They've made a huge stuff up which has cooked their goose.

Good riddance...and take the Greens with you.

Perhaps National should be upfront about their immigration policy..? How many immigrants are we going to let into the country? Let's lock a number in before Sep 23 so I know what I'm voting for and competing against in the job and housing markets....

Can you check with BE please Property King on what Nationals stance is on immigration because it's an important issue, like tax, so I want to know exactly how many immigrants were letting in.

I earn almost 50% more than what I would in NZ so to my wife. We managed to buy a few years ago in an inner city suburb and don’t have any need to own a car. The cost of living is far less than NZ as anyone who has lived here would attest. More disposable income you see.

Don't forget the extra tax you pay over there which almost nullifies the wage.

Who cares? An awful lot of New Zealanders including those of Chinese origin.

especially if he was hand picked , so they already knew his background (the pm is in charge of the SIS) and who he may report to.
why take the chance, why not just pick someone else. they had a couple of very good people that were ready to stand

What's worse Property King, having someone who claimed working for families when they shouldn't have 20 years ago or having a Chinese spy working in your party?

Crikey, if that were true, the "reds" under the bed would be actually "blue".

No wonder we couldn't find them, sneaky fellow.

Having got myself past the fact elections bring out the very worst in everyone, I can now say part of me would like the election campaign to go on even longer -- just to see how outrageous the various claims, and how loud the hysteria might get.

That might not be good for Stephen Joyce's heart. He's already a bit frothy at the mouth.

New Zealand would also be likely to completely run out of straw used in all the miss-portrayals of what left-leaning parties actually subscribe to.

Yes, I think it would be nice if we existed in this heightened state of awareness, interest and activism permanently.

It is overwhelmingly through actions undertaken in civil society (as opposed to via government initiative) that we change the status quo for the better. John Drysek, quantified this in a study on democracy.

In other words, citizens do need to 'rise up' to effect positive change.

For myself, unless the worst excesses were someone excluded (character assassinations, vicious personal attacks and abuse, constant parroting of strong ideological bias) that might be too exhausting to continue.

In my opinion, rational debate has become harder as the time has gone on.

I decided a while ago to vote for Top. I think their policies stand out as innovative and inspirational. I don't think they will get into parliament. You could then call mine a wasted vote, but my conscience says to vote for who I believe in, and a true waste would be to cast it for the status quo. If you look at an article by Jarrod Gilbert in the Herald today he rates Top an A for justice policy. Nats are D Labour C minus and NZ first an F. This is pretty well typical of Tops policies.

It's not wasted if it helps bring their progressive ideas into the debate. The two main parties show little innovation or critical thinking. There is really not much difference between them.

They've identified those electorates where they would like your electorate vote in addition to your party vote;

where the other two main party candidates will enter on the list regardless.

I always felt they needed to campaign really, really hard in one strategically selected electorate to ensure they didn't have to cross the 5% threshold to get representation. They need to get in there even as a lone wolf in order to build up to a kingmaker role.

Many of their policies could not be implemented inside a single term, so they need to be there to set the groundwork. Someday I believe our standard will be evidence-based policies. We just have to get past our history of election bribes;

The problem is, sadly, they have proven themselves to work.

I would be quite happy to see the end of the Greens , they have achieved absolutely nothing in the entire time of their existence , never had a single thing positive to say in Parliament , and are opposed to everything , and I mean everything .

Frankly they add no value to our political discourse whatsoever , as they never have anything constructive to say or do