Acting RBNZ Governor Grant Spencer isn't ruling out the possibility of an OCR cut, given the downside surprise of December's CPI data - he says the 'risks are two sided'

Acting RBNZ Governor Grant Spencer isn't ruling out the possibility of an OCR cut, given the downside surprise of December's CPI data - he says the 'risks are two sided' 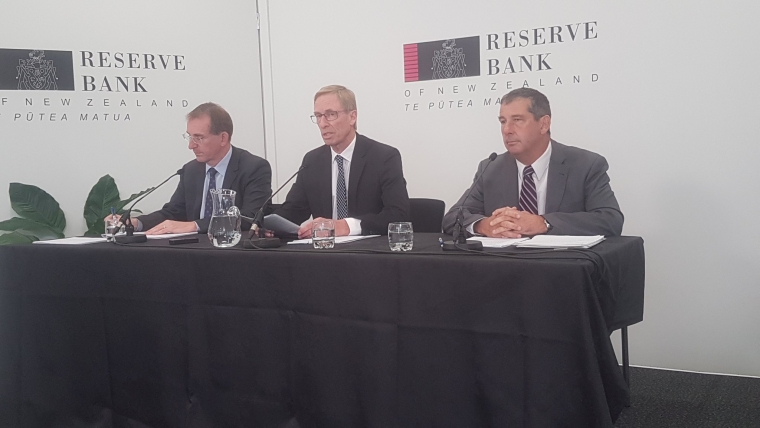 Acting Reserve Bank Governor Grant Spencer has used his last Monetary Policy Statement (MPS) press conference to signal the next move in interest rates could be up or down.

Speaking to reporters and analysts in Wellington this morning, Spencer said although the central bank is expecting the next move in the Official Cash Rate (OCR) to be up, there are also “risks to the downside.”

The Reserve Bank left the OCR unchanged at 1.75%. The wording in Thursday morning’s OCR press release said “…[monetary] policy may need to adjust accordingly” and made no mention of specific up or down moves.

When this was pointed out to Spencer, he said it was a “valid observation.”

“We have seen [inflation] surprise to the downside and if that continued, then it is possible that we can see interest rate reductions.”

The most recent consumer price index (CPI) inflation numbers, released in December, came in below market and economists’ forecast; rising just 0.1% for the quarter and 1.6% year-on-year.

The Reserve Bank was forecasting 0.3% and 1.9% rise respectively.

Spencer made note of the downside surprise in the MPS document, saying it was “lower than expected,” noting “the weakness was driven by softer tradables inflation.”

But, the central bank expects CPI inflation to trend upwards towards the 2% midpoint of the target range, and longer-term inflation expectations are “well anchored at 2%.”

Despite the downside inflation surprise, Spencer is not expecting the next OCR move to be down.

“If things pan out as we are forecast and expect, then we do see the next move to be upwards. That is reflected in our OCR track.”

“But,” he continues, “the risks are two-sided.”

Spencer was pressed about the Reserve Bank not meeting its inflation target. Its Policy Targets Agreement with the government mandates the central bank keeps inflation between 1-3% with a target of 2%.

Apart from briefly in 2017, CPI inflation has remained below the 2% level since late 2010.

But Spencer says the Reserve Bank has been within the 1-3% range for “a lot of time."

“That’s what flexible inflation targeting is about – we’re not trying to hit 2% on a continual basis,” he said.

“We don’t want to fine tune interest rates, moving them up or down to try and keep inflation at 2% - it’s not a sensible approach to policy. The sensible approach is to be patient and be confident; as long as we’re confident that things are moving back towards the target, that’s the approach we’re taking.”

Spencer elaborated on this when grilled by MPs at the finance and expenditure select committee later in the day, when asked by committee chairman, Labour’s Michael Wood, why the OCR had not fallen further, given “we have pretty soft inflation.”

The Acting Governor was adamant inflation would return, given the “growth and capacity” story in the New Zealand economy.

He adds that it would not be a good look if interest rates had to be eased, then subsequently had to go back up again.

Spencer also points out that further reducing the OCR would create more risk in the housing market.

“Any reduction of rates would risk reigniting housing and cause debt ratios to increase again.”

A warning to potential homeowners

Spencer also has some words of advice for would-be homeowners and current borrowers: be prepared for a shift in the global economy.

“[Interest rate] normalisation will happen – it has to happen,” he said.

“The risk is, and what we’re nervous about, is if that happens quickly,” he says.

Evidently, this is a concern shared by the financial markets. Earlier this week, US stock markets plunged after better than expected jobs data from the US was released.

The concerns for many was the jobs numbers suggested a stronger economy, which brings more inflation – something which has been lacking in the US for years.

This, in turn, could force the US Federal Reserve to hike interest rates, making borrowing more expensive.

A quick correction in the global market would hit the New Zealand housing market, Spencer says.

“The risk is bond rates sell off and increase in the international market. That follows through to New Zealand, that affects the bank’s cost of funds – so the mortgage rates, particularly on fixed mortgages, would increase.

“This is why borrowers and banks have to be careful about making sure that the debt service capacity is there – at not just today’s rates, but when rates are a bit higher.”

Should Kiwis be preparing for that?

“They should be, yes,” Spencer says.

“If you’re borrowing, then you should be thinking about if you can afford that mortgage at a 2% interest rate higher than you’re paying upfront.”

Acting Reserve Bank Governor Grant Spencer has used his last Monetary Policy Statement (MPS) press conference to signal the next move in interest rates could be up or down.

Such an insightful fellow - hardly the stuff for gathering nominations to win the Nobel Prize in Economics.

“We have seen [inflation] surprise to the downside and if that continued, then it is possible that we can see interest rate reductions.”

And the previous rate cuts, graphically displayed above, achieved exactly what?

... successive guv'nors of the Reverse Bank have crushed the prudence of savers into the dust ... and then tut-tutted as the record low OCR settings have allowed speculators to push Kiwi house prices sky high ... fuelling the mother of all property bubbles ...

What the hell is the point of having a reserve bank ... remind me , please ?

Pretty sure it's to professionally tut-tut while pretending to have solutions. Not a bad wicket.

We have a Reserve Bank so that our centrally planned economy can pretend to be a free market economy. The best of both worlds.
https://www.investopedia.com/terms/c/centrally-planned-economy.asp

Hmm, economists from esteemed banking and financial institutions, central and local government, and major corporations continue to spout economic dogma and attempt to control and forecast the market and yet we still end up with financial, social and environmental problems greater than we could foresee. Markets - 7 billion individuals following "rational self interest" and treated as a single entity.

Mestillthinks there must be something wrong with the economic dogma or at the very least our application of said theory.

True science will adjust the theory, models and formulas when faced with new evidence. Economics continues to try and fit reality to the theory.

True science will adjust the theory, models and formulas when faced with new evidence. Economics continues to try and fit reality to the theory.

Pop quiz.
Name me an economic theory that hasn't changed over the past 100 years despite overwhelming evidence against it.

Nope.
Just name one for us.
You made the statement. It would be pretty ironic if you couldn't back it up.

My bet will be UP, may be by modest 15 points, given low employment atm

This MPS is not that significant, given it's Spencer last. Much more interesting will be Orr's first, as his views could be quite different

Next time it's going to be "up Orr down".

If the next move is “down” – I can only imagine something pretty horrific must have happened in the meantime.

There is a 100% chance, he will be paid, one way or the other, or even if it stays the same...plus get a pension at the end of his stint...almost certainly expenses too.

Where do I apply.

It's just more obvious these days that it's a job closer to the Iraqi Information Minister that actually acting to protect our financial stability.

You could have applied.
They advertised for the position in the Herald last year.

The funny thing is you (likely) wouldn't have been the most least qualified person to apply, either.

My goodness - powerful comment - it appears the NZ$ was listening in, looking at this evening's moves.

Interest cuts will be needed this year as the RBNZ needs to meet its target, and inflation is currently below the midpoint of the target band.
There is no pressure to raise rates.

We can't afford not to follow alongside US in rates.
A weak kiwi would take care of lack of inflation pressures.

The RBNZ know that interest rates are rising and they will be powerless to stop them...period.

I'm sure all would be inflation drivers are going to paying mortgage debt. There's no getting out of this hole now. RBNZ did a deal with the devil and the hour of reckoning is nigh.

They have no clue but they’re running scared of the consequences that are coming from the bomb they planted back in 2008. Larry Summers, the father of QE even admitted that he cannot do economic forecasts, so more comments like these from our high priests are just another indication of how no one with any brains is at the wheel.