Groundhog Day for the government's export goal; We've been here before: Govt's already asked exporters what's wrong, so why another glossy booklet?

Groundhog Day for the government's export goal; We've been here before: Govt's already asked exporters what's wrong, so why another glossy booklet? 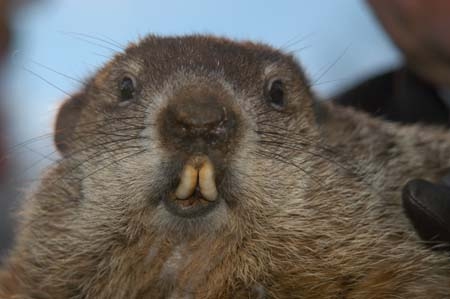 Haven't we seen this rodent somewhere before?

Wouldn't it be wonderful for New Zealand to increase exports from 30% of GDP to 40%?

Just think of the higher standard of living we could have, better medical care, support for the vulnerable and such things.

Isn't it great then that we have a government focussed on achieving this goal by 2025?

And isn't it great we've had successive governments consult exporters on what's standing in their way to exporting more and let us know what's wrong.

Now even though the previous Labour-led government consulted on the impediments to exporting more and higher value products, the current lot obviously decided those responses given last decade were all wrong.

Either that, or the 2007 work programme was lost as files were being shuffled around during the creation of the new Super Ministry.

The government wanted business and investors to know it was "on their side" and that New Zealand was "open for business" as it sought the capital and set the regulatory environment to help achieve this.

The Building Export Markets report was not so much a policy document, but a progress report "on the government's work to help grow New Zealand's export opportunities and build sustained economic growth," Joyce et al. said on Wednesday.

The first of six progress reports on the government's Business Growth Agenda, the Ministry of Business, Innovation and Employment (MoBIE) wanted exporters to provide feedback on its workstream "to assist us in focussing our efforts," it says in the report.

To recap, those six reports are on: Capital markets, Innovation and ideas, Skilled and safe workplaces, Natural resources, Infrastructure (including electricity, broadband, transport); and Export markets.

All six will have been issued by the end of the year. So if you're an exporter, then could you just let MoBIE know what's wrong in these areas.

And quickly please, we've got an economy to grow.

Now I'm no sage, but it could be that the feedback to the government on what's holding back exporters might go something like this:

That's pretty focussed and even sounds like I might have consulted a few exporters myself, you may say.

Well that's because it's from an even glossier report issued in 2007 (the so-called 'Export Year') by former Trade Minister Phil Goff and Economic Development Minister Pete Hodgson titled, Platform for the Future.

ie. It's been done before.

Then it has set goals for the export sector to achieve by saying who we need to catch up to.

So just for fun, try picking which of the following two statements came from Platform for the Future, and which came from Building Export Markets (and don't peek by going through to the links first).

"Our exports of goods and services represent around 30% of GDP. This is about the OECD average but well below the 40%-50% of GDP for similar-sized OECD countries. Recent growth in the New Zealand economy has been greater in the non-tradable sectors than in those parts of the economy that compete on the international stage. Our international competitiveness has been declining and, since the mid-2000s, our export performance has suffered."

"However, while other OECD countries have been rapidly increasing their export intensity, exports of goods and services have remained at about 30% on New Zealand's GDP, a similar level to the mid 1980s.

It's wonderful successive governments have wanted New Zealand to boost its export capabilities, and it's a good thing exporters are consulted on how best to do this.

But for goodness sake, they have already been consulted (and consulted before that), and given some pretty clear answers on what they want.

Successive government policy on boosting exports appears to be: if we keep saying it, it will come true.

But perhaps it won't.

What we can be sure of is that another glossy booklet without significant economic policy change has not worked in the past.

You've done the consultation already guys, so just get on with the response. 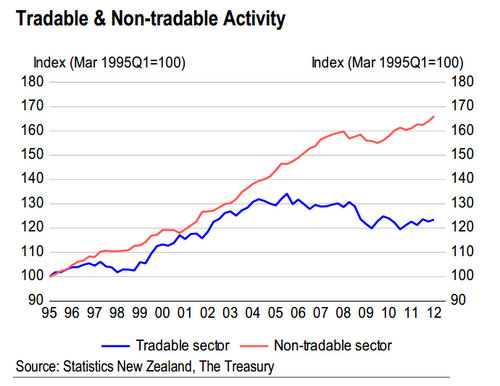 It doesn't take Einstein to work out the Government has no idea how to turn the economy around!

Take Christchurch, they think demolishing even more of the city and turfing people out is going to stimulate a recovery - they've done this for 18 months and got nowhere, why would it now create a recovery?

I can most certainly assure readers that Brownlee and co are no Einsteins.

Nice one Alex. Now, when you are in a clinch with JK or Bill, how are you going to pin them on dealing to the ex.rate overvaluation and volatility? Think it through and be ready to let these two TINAs have it. Then, find another career .....

How long would it have taken a good editor to re-jig the 2007 document into this one?

As I commented elsewhere Smiley and Wavey would call it  an 'aspirational' target. No plan needed, just "trust us"

doesnt say why.....depending on the sector....if you are a taxi driver petrol at $2.19 instead of $1 is  huge difference. Go back some decades, where ever you look mineral deposits were richer in the ground. So as we move to the next less richest ores we expend more energy to get them.....and then the double whammy of more expensive energy....Capitalistism is really about pillage at a decent margin...so as long as resources are cheap commodities and ppls ability to pay is good the bottom line is good.  Now as we move into expensive inputs and limits on what ppl will or can pay the margins go bye bye.

immensly telling that it seems its that tax take is blamed....yet really it isnt.

The latest private sector forecasts show imports rising faster than exports over the next 5 years so that in 2016/17 we have a trade deficit and then have the small problem of a $ 20 billion interest bill to borrow.

We make Madoff's ponzi look like a Sunday school picnic.

There you go if nothing changes nothing changes.  Tradeable exports have been 22% of gdp +/- 1% since 2003 (all I have numbers for) - so we keep on with the same settings, spin them and polish them a bit and claim there will be a sea change.  A goal is not a strategy and hope is is not a substitute for policy change.

I'm guess you know the technicals (if not speak with BH,) to counter the kind of opposition you got, however Joyce is good at filling space and so it pretty much turned into a 30 minute party polictical broadcast for National (HT Mr Joyce, can't fault you on this score.) So Alex, look up some interviews conducted by Jeremy Paxman to get some inspiration for handling his ilk.

"The language of the report reveals the Government's simplistic thinking

There will always be in-efficiencies due to regulation, its simply the playing field....