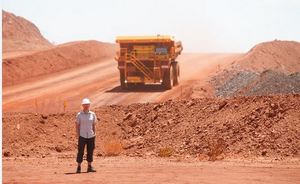 Australia is still the market that global investors love to hate. It is an easy target for those worried about global growth, Chinese demand and falling commodity prices. This concern is often expressed in terms of anxiety about loan exposures to the mining and energy sector. The perception is that Australian banks must get caught in the crunch as iron ore, oil and gas prices tumble. It is the same disturbing rumble that from time to time hits the Australian dollar and equity market more broadly.

The fact is that systemic Australian bank, and individual bank, exposures to the mining, oil and gas sectors are small in terms of overall loan books.

What are the facts?

Australian banks have to disclose their risk weighted assets by sector. Their latest quarterly reports are thoroughly examined by analysts. As we have reported extensively, capital requirements of Australian banks have been in the limelight over the past year as banks have raised equity to meet new global and Australian Prudential Regulation Authority guidelines. On many gauges Australian banks are the best capitalised in the world among the group of systemically important banks. Asset quality and bank capital have been a more general focus with investors increasingly aware of economic and sector risks through better disclosure.

More poignant in the last few months has been questions regarding potential future loan book quality in exposures to mining and the oil and gas sectors.

The large four Australian banks have in aggregate A$65 billion, or 1.6%, of their loan books exposed to mining and oil and gas. With about A$31 billion in oil and gas loans and about A$34 billion to the mining sector. These disclosures include committed exposures but not yet drawn credit lines.

Specific “in the news” Australian loan exposures to miners such as Gindalbie Metals, Atlas Iron and Fortescue are perhaps more limited than widely expected, with the US high yield market and syndicated global bank books providing most of the facilities. Similarly, Australian oil and gas producers also have global bank facilities. The Australian banks do have some oil and gas trade receivables exposures, and ANZ and CBA are reported as providing a A$250 million facility for the quality PNG oil and gas producer, Oil Search.

With these exposures, it would take a large pick up in default rates to impact on either profits or capital positions. Even with a 20 times rise in resource sector impairments to a 20% level and then assuming only half the loans were recoverable (ie a 50% default rate), the overall sector exposure would only amount to 16 basis points or 0.16% of bank capital. You could imagine the risks being worse but even then resource sector risks seem manageable.

Housing remains the largest exposure for the Australian banks. In our opinion impairments on the banking sector’s core housing and housing hold credit exposures seem likely to stay very low. This is because employment growth is accelerating. In the December quarter net employment growth averaged +43,000 per month, after averaging a solid +25,000 a month over the 2015 year. Housing credit growth has also been picking up, with owner-occupier credit growth averaging +1.1% per month in the December quarter and averaging +0.8% a month in the 2015 year. These trends are consistent with broader improvements in Australian business and consumer confidence as Australian households and companies react to lower interest and exchange rates, and new leadership.

There are risks in Australia. A potential drought is clearly one risk that is not that well documented.

In our opinion the systemic risks to the Australian banking system from falling commodity prices and Chinese equity market volatility are potentially over-emphasised by many investors.

Don’t Be Tempted By Australian Bank Stocks
The big four banks are down 9% this year but stricter capital rules and soured loans could push shares lower. Read more

Aussie banks. At the rates they pay executive leaders why should those leaders worry anything about tomorrow. Take the money today, and if it crashes walk away with the nest egg. No worries.
Serious problem with incentives here.

just be wary of when they start to tighten credit, you might find unless you have a LVR of 30% or more they might not want to resign you if a real slow down hits

Its hard to feel sorry for these bankers , who are rorting us here in NZ