Rodney Dickens doesn't like the RBNZ policy settings, arguing they will lead to disaster. But he does see an opportunity for borrowers

Rodney Dickens doesn't like the RBNZ policy settings, arguing they will lead to disaster. But he does see an opportunity for borrowers 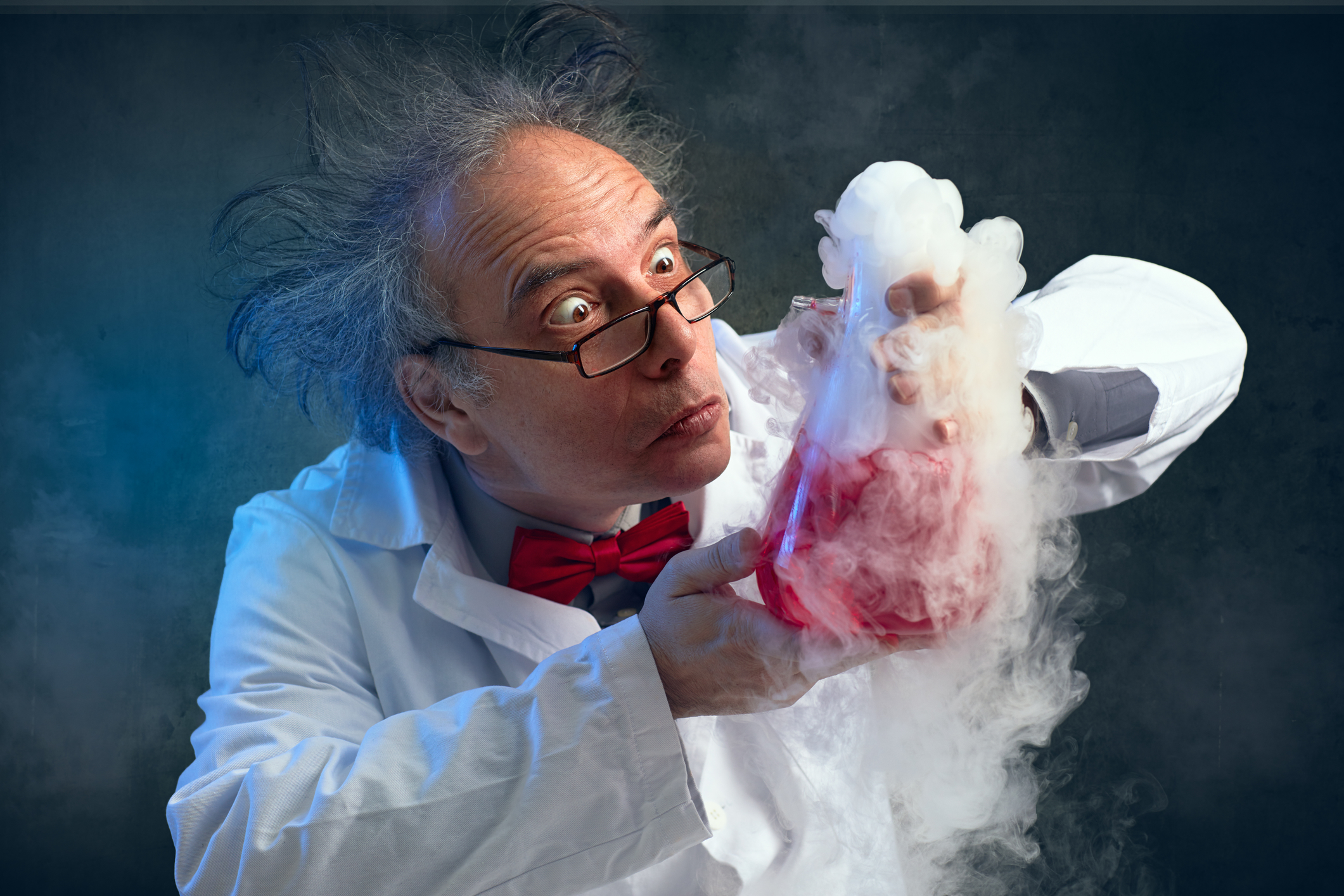 As covered in our Monetary Policy Briefing report released to subscribers, Governor Orr's pro-growth experiment will lead to a disaster.

His decisions are contrary to global best practise and are supported by manipulated forecasts.

The analysis in the last report isn't repeated here but this Raving focuses on one of the implications: the opportunity Governor Orr's experiment offers borrowers to lock in cheaper longer-term debt.

There are good reasons to take issue with the Reserve Bank's forecasts as outlined in the latest Monetary Policy Briefing report, but I agree with some of the comments that accompanied today's OCR decision:

"While GDP growth in the June quarter was stronger than we had anticipated, downside risks to the growth outlook remain."

"Domestically, ongoing spending and investment, by both households and government, is expected to [in time] support [stronger] growth."

GDP growth was stronger in the June quarter than expected by the Reserve Bank (chart below).

This resulted in a minor setback to the market-led fall in swap/wholesale rates Governor Orr has been effectively encouraging (second chart below).

The fall in swap rates may not have finished flowing to lower fixed mortgage rates with this focused most recently on the 3-5 year fixed rates (adjacent chart).

Mortgage and swap rates aren't linked directly but there tends to be an indirect link albeit one that can vary quite a bit over time. 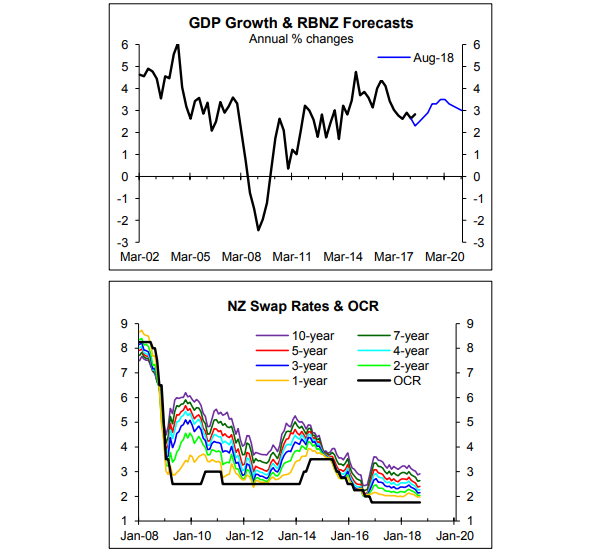 Shorter-term fixed rates are still below longer-term rates but if GDP growth disappoints somewhat over the next couple of quarters the gap should narrow further.

If longer-term rates fall further they will offer even better protection than now against Governor Orr's misguided pro-growth experiment.

The rbnz knows a big chunk are fixed short, 2 years or less - so know any future OCR hikes will likely bite fairly quickly - Must admit fixing for 5 years at 4.99 looks very very tempting to me

Almost 60% of all mortgages are open to a rate reset within the next 12 months (floating, or fixed rates expiring with one year).

That's fascinating. So 60% of kiwi mortgages are due for renewal in the next 12 months.

Gareth Vaughan's article of the other day suggests that banks lending criteria are now restricting mortgage offerings by 15-25% of what would have been offered in 2017. How does this play out? If people don't satisfy the new criteria either because of price falls or just not fitting the new 'play book' do they revert borrowers onto the standard variable rates/Floating rates? Could we see a 'beauty parade' of debt held where the banks try and keep the good stuff, steal some other good stuff off the other lenders with tempting rates for those with lots of equity and ditch the loans with less coverage into the market? Westpac already don't seem to be too keen to compete for new business (but I think they have a swallowed a bit too much of the interest only Australian pie).

same thing Sherlock.. you go to a new bank to get their great new rate as your old rates expires, but what happens if you don't meet their tightened criteria? What if they say, 'no sorry sunshine, our indices show prices have fallen 10% so for you to get that sparkly rate you want, we're going to need you to inject that cash that's gone missing.'

Your own bank have decided to do the same so what's the alternative if you don't have the cash for the great rate - The standard variable rate with your existing lender which is not as attractive.

You don't understand Nic, the rate comes up for review, not the loan.

I don't think you understand how this works. The banks will be re-pricing all risks based on the quality of the loan and the security against which they have leant. Conditions have already changed for new borrowers, it is very likely that those looking to move banks for a better rate or even attempt to change to a new fixed rate will go through a reassessment of their income, expenses and a check on their equity position (wherever that may be in a falling market). The detail and scrutiny of future lending decisions are likely to be far more robust than before - in light of what has been exposed about Aussie bank practices over the ditch and which is yet to be revealed in NZ.

Hi Yvil, It may be better if I explain it in numbers.

In 2019 Bill wants to re-finance with Westpac and capture their new market leading rate of 3.75%, he's been paying his mortgage regularly and all should be fine you would think.

His new mortgage balance is $712,000 but the house is now valued at $850,000 (that's the security the banks are loaning against. His equity is now just $138,000 and the banks are worried that in a soft market they may have to take a further hit if Bill got in trouble. His equity stands at 16% of the value now and therefore he doesn't have the requirement to fit the 25% standard required to get the super 3.75% rate. he shops around, but all the banks tell him the same thing. He can't re-price the mortgage now so gets shifted onto the variable rate at 6.25% which is the price that Westpac require to absorb the extra risk of Bill's diminished equity.

In the UK the better rates were for borrowers with over 40% equity and still applies today. Those with plenty of equity can re-finance at around 1.75% and fix (Bank of England Rate is still 0.75%) those that have greater than 25% will be able to fix at 2.25-3% and those that don't have 25% could be looking at fixes nearer 4% or similar floating rates.

There are other options, sell the Aston Martin, dispose of the boat and use the funds to top up the equity to qualify for the better rates. Anyway I hope that explains how the banks will work through this to protect themselves.

Wow you have time on your hands. Couldn't bother reading your loooong post. I have many loans that I renew during the year. You keep talking, have fun

ANZ will allow you to refix with a loan value up to 95% of the property. They will likely charge a low equity premium and require a registered valuation if the loan is over 80%.

For some first home buyers that's what they're facing. But my comment was more in response to Nic's hypothetical where he suggests a borrower with 16% equity will be bumped onto a floating rate because they couldn't secure the leading rate.

I disagree with RD re longer term rates for the simple fact that no one can predict where rates will be in 5 years or even in 3-4 years. If 5 year rates were equal to 1 year rate, I would choose the 1 year because it allows me to move quickly. Personally I have several loans fixed for 1 year with staggered renewal dates. It's close to the flexibility of floating but at much cheaper rates. It has served me very well for the last 3 years when many were predicting rates to rise "imminently"

While no one can predict future rates accurately, the pressure is building globally for higher rates. It’s just a question of time. Interest rates jumped by 5% in less than a year during the mid 80s. I’d rather have longer term certainty, even if I ended up paying an extra 1% or so, rather than the risk of a big jump and some severe financial stress.

Maybe.
But What Nic is saying is that every time a loan(s) is touched in any way, it's will become a Review Event. Those who have a 2 year Fixed loan maturing, say, on Monday will 'be reviewed' no matter what they might want to do - fix further out along the curve, or go onto floating. At 60% LVR you will likely sail through, if the Bank looks at the V bit and the equation still works, but an unknown number of borrowers are going to find that they don't get across the LVR line with a new V, and they will be 'asked' to take their business elsewhere - or repay at least some portion of their loan to get back inside the 'new' guidelines.