As the chance of RBA rate cuts rise, it is wrong to think the RBNZ will follow as momentum here is very different and the RBNZ is meeting its targets, BNZ's Stephen Toplis says

As the chance of RBA rate cuts rise, it is wrong to think the RBNZ will follow as momentum here is very different and the RBNZ is meeting its targets, BNZ's Stephen Toplis says 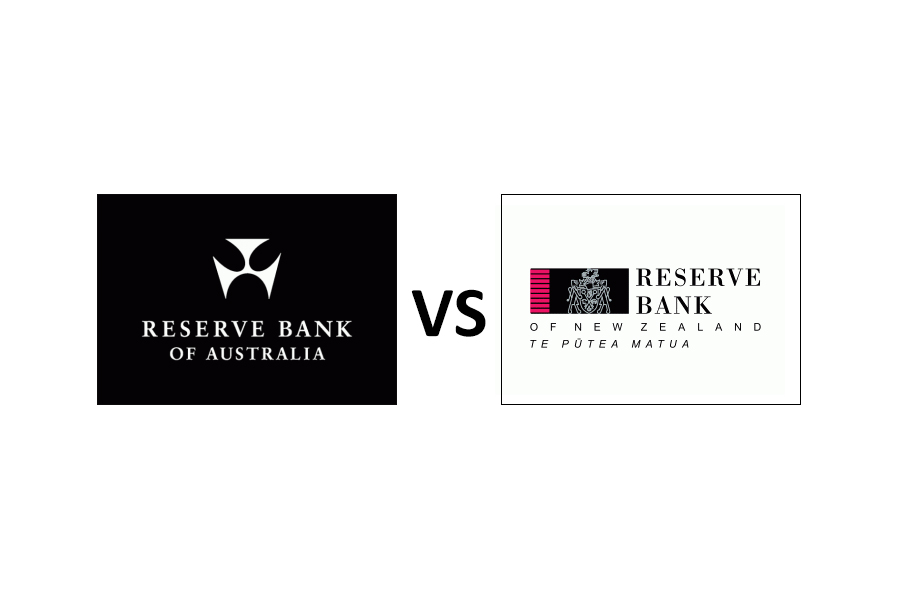 Our colleagues at NAB have just announced their expectation that the Reserve Bank of Australia will cut its cash rate twice before the end of 2019. With conditions deteriorating in the Australian economy and the RBA clearly backing away from its tightening bias, the probability of an easing there is certainly rising. Indeed, the Australian Futures market is pricing in a 100% chance of a rate cut by September and a 50% chance of a further cut by year’s end.

As the market becomes increasingly dovish about Australia, investors seem very keen to assume that wherever Australia goes New Zealand will follow. While it is true there are close links between the two countries, monetary policy will only be replicated when economic conditions demand. Right here and now that is not the case.

To make our case, we compare and contrast the key statements in NAB’s recent rate-cut note with what’s going on here. All quotes from here on in come directly from that note. 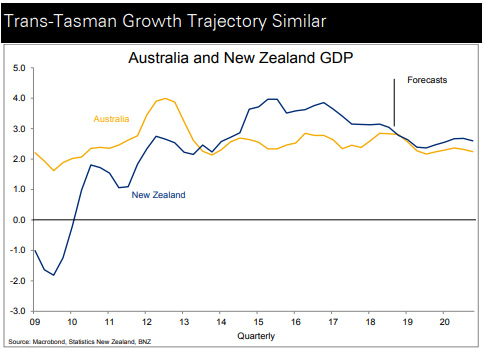 Growth and Unemployment
In Australia: “Growth appears to have lost significant momentum, placing at risk further improvement in the labour market”.

In New Zealand: Growth is also losing momentum. The annual increase in GDP to September 2018 was just 2.6%, down from 3.0% a year earlier and 4.1% the year before that. Moreover, we expect further declines in the annual reading through to June 2019. This does place at risk further tightening in the labour market but New Zealand’s labour market is already stretched to breaking. The unemployment rate is already near its NAIRU, skill shortages are rife and a lack of labour availability is acting as a serious constraint on growth. While there may be no further ”improvement” as such neither do we see the unemployment rate moving up to a level that would see the RBNZ scurrying to lower interest rates. The current unemployment rate in New Zealand is 4.3%, in Australia its 5.0%. Moreover, New Zealand’s participation rate at 70.9% is miles ahead of Australia’s 65.6%. 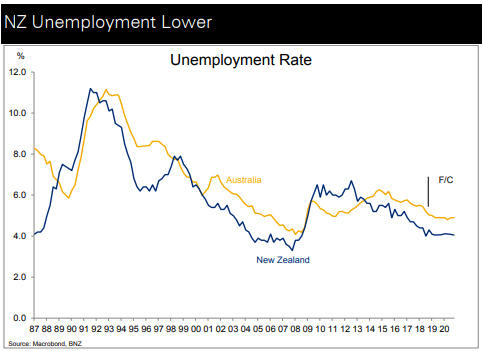 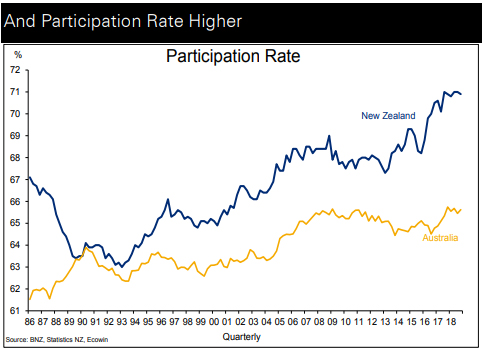 Residential Construction
In Australia: ”The Q4 national accounts confirmed that the downturn in the residential construction sectors is likely to be as sharp as we had previously forecast and similar in magnitude to the early 1990s recession”.

In New Zealand: Residential construction increased 2.7% in the year to September 2018. Partial indicators suggest the annual increase to December will be of a similar level. We then forecast the pace of growth to accelerate. The level of residential building will soon be at record highs. The number of new dwelling consents issued in the three months ended January 2019 was 8.9% higher than a year earlier. There still appears to be an excess demand for housing. We do believe construction activity will eventually soften as the current acceleration in building work put in place begins to erode the undersupply at the same time that slowing population growth reduces demand. However, given the time that this process will take to evolve, the chance of construction activity turning negative in the next two years is slim. The likelihood of a 1990s type correction in New Zealand is even slimmer and only likely to occur in the event of a major external shock. 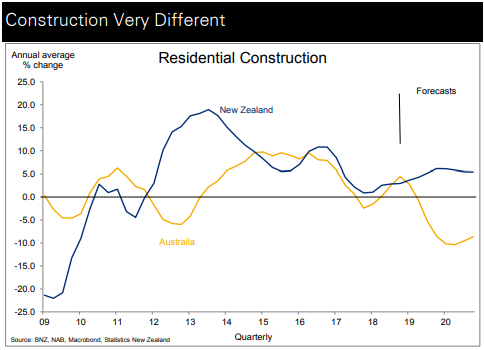 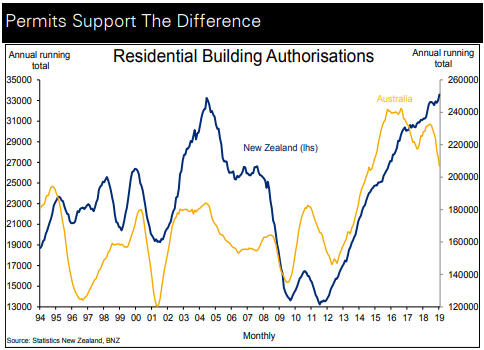 Household Spending
In Australia: “Consumption growth has remained weak, alongside only modest growth in household income”.

In New Zealand: Consumption growth has definitely weakened, and is likely to weaken further, but, at an annual rate of 3.0%, it still sits near its long term average. Real retail sales (ex-auto) rose 2.0% in the December quarter and consumer confidence remains at relatively solid levels. We concede, nonetheless, that household disposable income growth is moderating in line with slowing employment growth and a small pickup in CPI inflation. 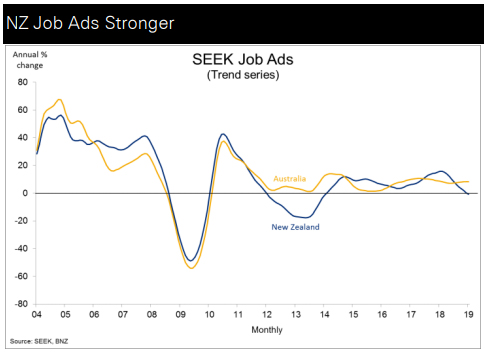 Job Ads
Australia: “Job ads have declined modestly for a number of months” supporting the view that the Australian unemployment rate will not fall significantly further. 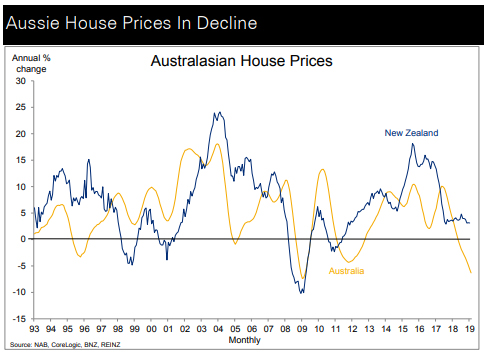 New Zealand: Nationwide prices are still pushing higher, albeit at a low rate. A modest price correction is occurring in Auckland and Canterbury but we are not expecting a significant drop any time soon.

New Zealand: There is limited evidence that credit availability for owner-occupied housing is under any pressure. Loan-to-value mortgage restrictions operate but have been in place since 2013 and, at the margin, have been loosening recently.

Inflation
Of course the most important difference, from a monetary policy perspective, between New Zealand and Australia is the extent to which each jurisdiction is expected to miss its inflation target.

As things currently stand, the Australian CPI is further away from target than is the case in New Zealand and it’s expected to stay that way for a while. This, of course, begs the question as to whose inflation target is the “right” one? New Zealand’s mid-point of 2.0% or Australia’s 2.5%. If the RBA adopted the RBNZ’s target then there would be very little argument for a rate cut in Australia. If, however, the RBNZ adopted the RBA’s target then we should be considering easing relatively aggressively. That a small change in the inflation target could have such a wide ranging impact on monetary conditions, and the overall prospects for an economy, is rather disconcerting and again questions the efficacy of inflation targeting in its current form. 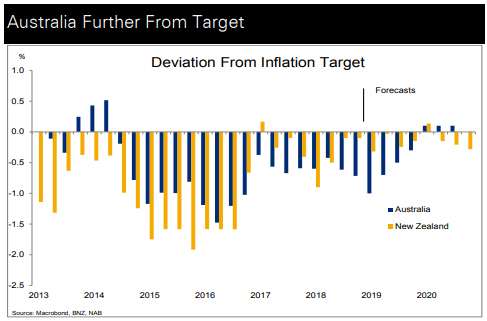 Putting all this together, we see no reason to believe any cut in interest rates by the RBA would necessitate the RBNZ following suit. Current market pricing sees at least one rate cut as being definite for Australia while New Zealand prices a  70% chance of a reduction in rates within twelve months. Without a drought (unlikely) or a major external shock (plausible) we see no reason for the RBNZ to cut rates. It looks unlikely to us that the unemployment rate will deviate significantly from a level considered consistent with maximum sustainable employment nor will annual CPI inflation deviate significantly from target. Unless these things happen then an Australian rate move in and of itself should not generate an RBNZ response. 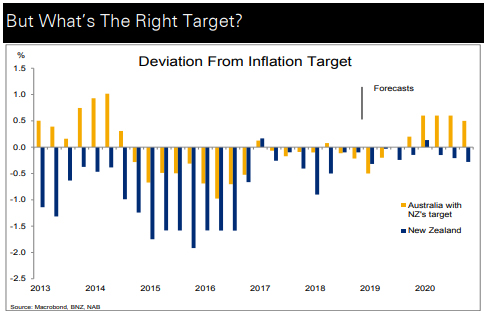 There is a chance that any softening in the Australian economy will have flow on impacts for New Zealand. In particular, a softening Australian housing market and weaker labour market conditions could impact the New Zealand economy. But before this impact can have a meaningful effect on domestic monetary settings New Zealand would have to satiate the current excess demand for both labour and housing. Given that this will take some time, we would argue that any Australian downdraft would be felt with a relatively long lag. This means that even if the RBNZ was to respond it would be much more likely to be next year than this. 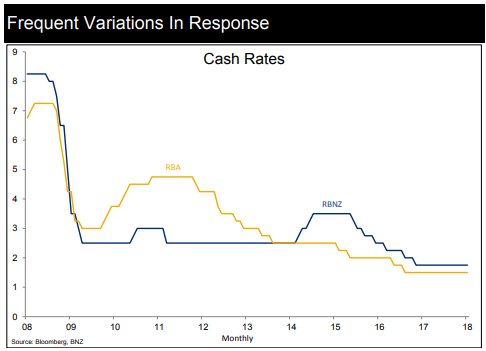 *Stephen Toplis is the Head of Research at BNZ Markets. This article was originally posted here. and is reposted with permission.

Since 2009 we have heard all the bank economists discuss the NZ interest rate environment- always with a tightening/hiking/maintaining bias.
In reality, since 2009 interest rates have declined significantly and flatlined. Every hike has been hastily reversed.
What is the motivation to always seek to ‘talk up’ rates?

Probably something along the lines that economic cycles are natural and cannot be avoided, and that seeking to avoid them via QE and plunging interest rates has not worked but only pushed things out and potentially made things worse?

There are definitely things that worsen the cycles. Debt based economics and the size of debt bubbles is definitely something that increases the extremes in the cycles. By expanding the money supply and debt bubble all of the dead wood in the economy is allowed to grow and threatens the stability of the entire economy. The behaviour is foolhardy and we're going to pay for it down the line.

What is the motivation to always seek to ‘talk up’ rates? - Wishful thinking would be my guess. Either that or ignorance of reality.

Attempt to control inflationary pressures by strengthening the currency. More about currency manipulation than rate cycles.

Good charts, but how much liquidity will the RB have to withdraw to stop the 90d and IRS rates from falling below the OCR? The market is saying something very different to what the Central Bank & commentators like yourself are saying (no offence)

The oh so popular response of "where Australia goes New Zealand will follow" on interest rates is now officially canned because the RBA has not done a good job managing their economy and bank lending practises. Apart from the incorrectly timed interest rate uptick under Wheeler our own RBNZ has done a better job and reigned in lending far earlier than Australia and without a corresponding property market downfall. Even the wobbly auckland market is hanging tough.

I have had a few invites to the Parity Party before, but still no cigar....

The cross rate quote sits at .9681. Maybe a good time to buy a property in nsw or vic if their exchange rate and house values hit rock bottom

What appears to be mad about all of this, is the central banks desire/mandate for stability but instead creates instability...(lets blow debt bubbles to create stability post GFC - is this not insane?)

It's better than the alternative.

Those Australian forecasts are going to need some major revisions.....

Another great detailed analysis from Mr Topliss. Honestly looking at those graphs and digesting his view that I respect why are the DGM's so worked up ? Economically we live in good times so much better than the flaky 70's,80's and 90's. To finish on a positive note the 2 properties I bought in Kapiti in 2017 have done very well up close to 40% and 5.5% rental return on purchase price.

HG - It was an average house up 30% apartment up close to 50% Paraparaumu Beach to be precise the whole coast is booming with their new motorway and Transmission Gully being developed Kapiti is/becoming an Wellington suburb. It's a nice place a discovery for me.

Wellington always seems to boom with Labour in power. Remember Helengrad? Nine years in power & what a great job she did of Wellington.

Wait until the new Hipkins NZ Institution of Polytechnics in Wellington manages the monolithic NZ-wide Polytechnic from Wellington - there’ll be 100s of new jobs administering all the regional outposts (previously regional ITPs).