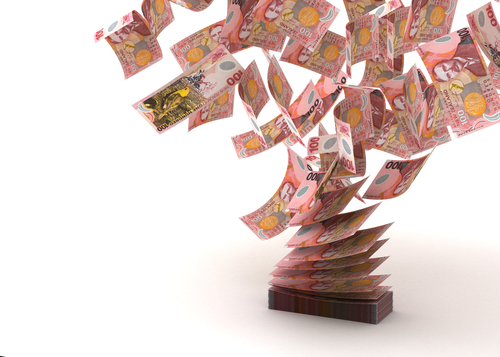 That loud clanking and jingling you can hear is the sound of money pouring into the coffers of New Zealand households.

Kiwi Household Inc had a pretty darn good September quarter according to new statistics from the Reserve Bank.

The RBNZ said that as at the end of September the total net household wealth for New Zealand households stood at $55.81 billion, up some 10% on the $50.709 billion figure recorded for June and compared with $42.516 billion in September 2012.

The latest figure shows a strong bounce-back in the household finances after net wealth in fact dropped for the first time in two years in the June quarter.

Also, the latest figure is nearly double the amount of wealth households had just two years ago and about five times the amount in the kitty in March 2009 at the low point after the global financial crisis.

Not included in these figures are the value of houses, which are shown separately, but the figures for September are not yet available.

A key statistic the RBNZ looks at is the percentage of total financial liabilities to annual disposable income.

After breaking through the 100% barrier in early 2000 this ratio rocketed to as high as 153% (ie financial liabilities equalled 153% of disposable income in March 2009 before coming down to 142% in March last year.

However, it has continued to slowly rise again since, reaching 148% as at the end of September, up from 147%.

The RBNZ has been concerned about Kiwis' debt levels and vulnerability to a house market shock and therefore a flow-on shock to the banks that have loaned on the houses. This was the key underpinning reason for its decision to implement "speed limits" on high loan-to-value lending as at October 1.

But for the more cheerfully disposed, while the household debt ratios are slowly rising again, the ratio of household financial assets to disposable income is rising more quickly. It was at 189% as at September, up from 185% in June and just 176% in September 2012.