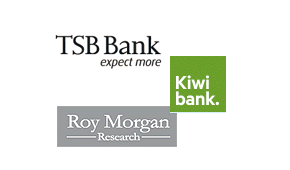 Kiwibank has been named Major Bank of the Year for the third straight year in Roy Morgan Research's third annual Customer Satisfaction Awards, with TSB Bank taking out the Financial Institution of the Year Award for the first time.

Roy Morgan revealed its 2013 winners in Auckland on Thursday night. Pip Elliott, the firm's New Zealand general manager, noted TSB won Financial Institution of the Month in 11 of 12 months during 2013, with SBS Bank winning in June. With satisfaction steady at 95% throughout the last quarter of 2013, Elliot said TSB was positioned to continue the winning streak this year.

In the Major Bank of the Month category, Kiwibank also won 11 times, with BNZ winning in March. However, a late surge from ASB means it's "the challenger to watch" in 2014, Elliot said.

"Talking about our satisfaction (or dissatisfaction) with our financial institution is practically a Kiwi pastime," Elliot said. "And every bank, credit union or building society faces intense competition for the trust and loyalty of New Zealanders. The award-winning organisations have clearly researched and implemented ways to attract and satisfy old and new customers, whether they service a defined and concentrated market or any Kiwi with a spare dollar for safekeeping or a desire to borrow more."

“Social media such as Facebook and Twitter have given customers a megaphone to broadcast their praise or disapproval, while smartphones allow instant access to information about prices, availability and ratings," said Seccombe.

“Businesses across all industries need a continuous, accurate, quantified measure of overall customer satisfaction. These awards identify and commend the businesses that listened to their customers throughout 2013 and provided an industry-leading level of satisfaction."

“Roy Morgan Research congratulates not only the award-winning businesses, but all that made efforts to provide a better product, service or environment to customers in 2013," Seccombe added.

Major Bank of the Year Kiwibank

Car Manufacturer of the Year Suzuki

Chemist / Pharmacy of the Year Amcal

Clothing Store of the Year Hallensteins

Coffee Shop of the Year Starbucks

Department Store of the Year Ballantynes

Liquor Store of the Year The Mill Liquorsave

Music / Book Store of the Year Paper Plus

Shoe Store of the Year Hannahs

Supermarket of the Year Pak ‘nSave

Hotel And Resort of the Year Hilton

International Airline of the Year Emirates

Electricity of the Year Energy Online

Gas of the Year Nova Energy