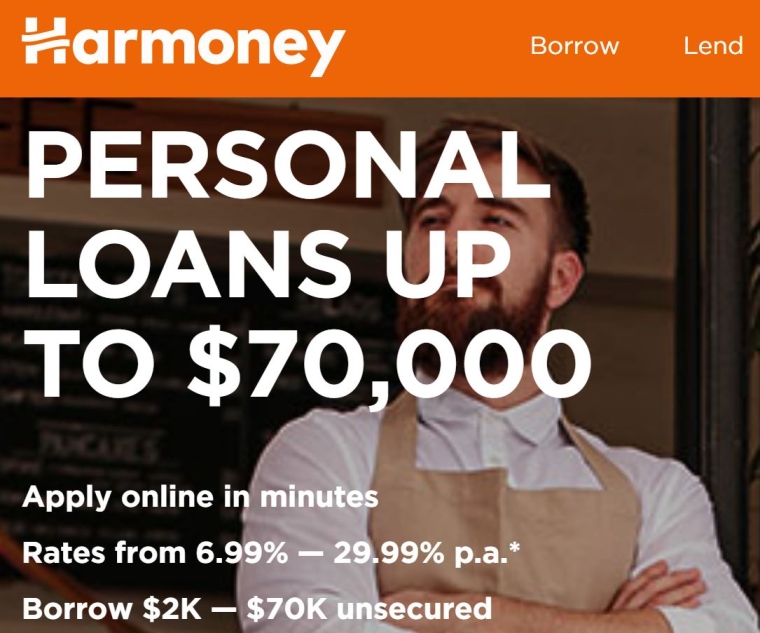 BNZ has got into bed with peer-to-peer (P2P) lender Harmoney via a $50 million securitisation programme.

Harmoney founder and co-CEO Neil Roberts told interest.co.nz that BNZ is the senior note subscriber in a securitisation facility adopted by the P2P lender. Securitisation is the conversion of an asset, such as a loan, into marketable securities, typically for the purpose of raising cash by selling them to other investors.

"We have BNZ buying senior notes. So if you think about a dollar into securitisation, they take the senior 70 cents, senior being that they are the first to get paid. And then there's a series of notes that sit below that. There's a mezzanine layer and that is taken by another Australasian entity [Roberts says it does not want to be named], and the final piece is called the junior note where Harmoney puts in an equity layer which is the first loss layer," Roberts said.

Retail investors, or lenders, who typically fund about a quarter of Harmoney's loans, won't be affected by the securitisation programme, said Roberts.

"For retail investors there is absolutely no change. All we have done is scale back some of the wholesale [or institutional] funding that has been going on and introduced our own securitisation programme," he said.

"We do operate under a [Financial Markets Authority] licence. That licence says we have to have a fair, transparent marketplace and the process is in place to make sure that is happening."

Harmoney says the securitisation programme will reduce its costs and support investment in its technology development for the benefit of both borrowers and investors.

Roberts said Harmoney's plan was always to have wholesale funding contribute to a robust marketplace. Overseen by a trustee, Harmoney Warehouse Ltd was set up as a special purpose vehicle to issue the securitisation programme's notes. The idea is the securitisation notes are sold to debt market investors at some point, he added.

Harmoney launched in September 2014 with a five-year licence issued by the FMA under the Financial Markets Conduct Act in July that year. An FMA spokesman said the regulator undertook a "targeted consultation" on the removal of term limits for licences last year. The spokesman said the FMA is in the final stages of that consultation process and will unveil the outcome shortly.

Roberts said Harmoney's in talks with the FMA around renewal of its licence.

Confirmation of Harmoney's securitisation programme comes after Roberts confirmed last year the company had taken on the ability to lend its own money through its own platform. 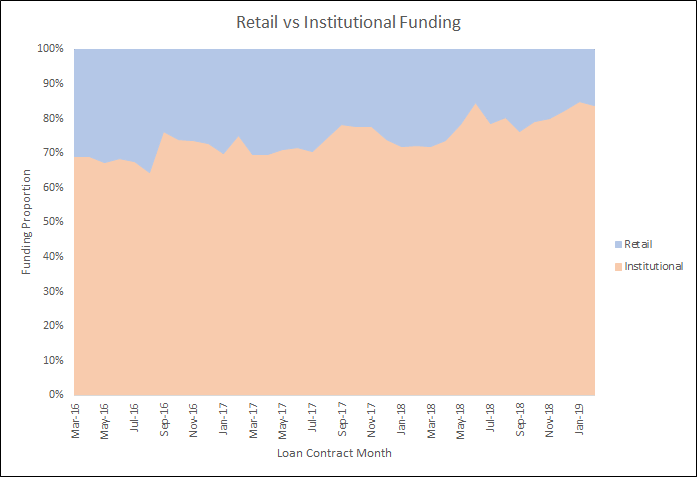 well that graph just above you comment makes it clear, everything is going to the institutional investors

My expectation is that there isn't enough retail investors to keep up with loan growth - hence insto is in there and they will drive a hard bargain. Establishing a warehouse would indicate loan growth is solid, so they want more funding certainty. What has been the loss rate on your loans? should be around 4%.

This is very much the case - just a waste of time trying to get decent loans, Auto-withdraw turned on for the last few months

I have also begun the withdrawal process, most of the loans available now are trash.

I have been a lender for almost 4 years. I only lend on A grade(80%) and B grade(20%). These have been increasingly hard to find. My RAR is 9.72% and the default rate is miniscule: $174 on a total investment of $18,000. I have been gradually withdrawing capital,but only because the loans are not there.

No change for the retail investors? Thee has been almost no volume for the retail side (apparently about 10% of what it was this time last year), and most of what has made it to the retail market has been toxic junk I won't touch. Auto withdraw is turned on, i'm getting out of it.

Yes. After about 2 years, it went downhill for retail investors. I was an active lender early on, but letting existing loans wind up. Not really what would call a real P2P platform anymore.

Was it ever a P2P platform really? At least 75% of lending is institutional. Doesn't saying you are a P2P lender give the impression that it is 100% funded by kiwi individuals? Am I missing something?

I'm in the (rather long and tortuous process) of signing on with squirrel. It seems to match my risk appetite fairly well, though I won't be putting the Aussie house deposit on it of course.

I struggle to buy a sensible loan i have been withdrawing funds over the last 6 months . No point anymore mostly junk and a waste of time .

Totally agree with J.C and Pragmatist. Loan volume and quality deteriorated significantly over the year. The last 20 or so times that I've logged in there's been absolutely no loans available. My auto lend is still picking up ~$100 p/w of D grade loans but that's making the portfolio lopsided so I'll probably wind it down. Meanwhile I was able to get 30K into squrrel over 2 months, I will miss the higher interest rate though.

Securitization. What security? It’s all unsecured. The debt is just split into risk components.

Totally useless for retail investors these days. Just can't get enough decent loans as very little makes it to retail. Big change over the last year. Autowithdraw on!

For the avoidance of any doubt , securitization was the cause of the GFC .

Banks packaged their loan books ( mostly loans to weak borrowers & often supported by the security of a 120% LTVR mortgage on a wooden shack in places like rural Alabama ) , and then sold the loan package as AAA rated Debt to a fund manager or another Bank who collected the interest , less an admin fee.

The problem emerged when the levels of default on the underlying loans grew, and the Banks had cleverly shifted the risk to the new owners of the debt .

The benefits for the banks was they could remove the loans from their Balance sheets by "selling " them in a process called ''securitziation " which is a euphemism for 'getting rid of this crap " , and this would ostensibly free the Bank's capital up to make more loans and still meet the Banking regulators Capital Adequacy Ratios

We now know the banks were cheating, it was too easy and too good to be real