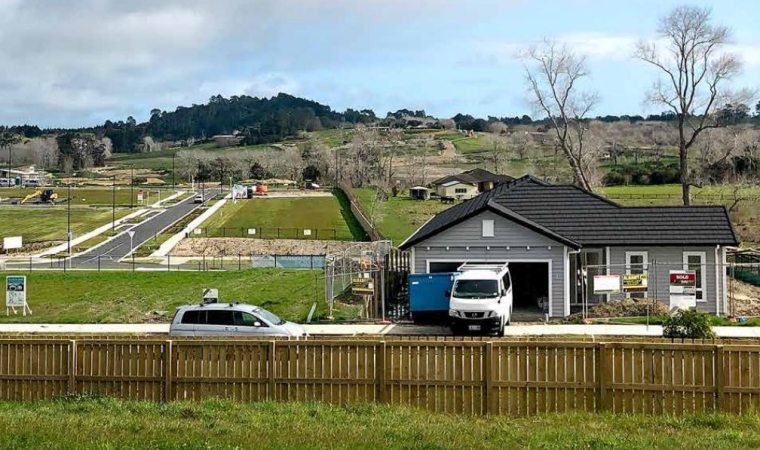 Treasury has warned of the costs of a user pays infrastructure financing model, being used in northern Auckland and planned to be duplicated in other high-growth areas.

The Crown-owned entity, Crown Infrastructure Partners (CIP), has set up a stand-alone company or special purpose vehicle (SPV), which has taken out a loan from the Accident Compensation Corporation (ACC) to pay for roading and wastewater infrastructure to service parts of Wainui.

The loan will be repaid using levies imposed on those who buy sections at Fulton Hogan’s Milldale development at Wainui.

Buyers of nearly 4000 mostly residential sections will be levied every year for 30 years. The first-year cost will be $1000 in most cases, with this increasing by 2.5% a year.

This is a long term by New Zealand standards, reflecting the long-term nature of infrastructure investment.

The rate is accordingly much higher than that of New Zealand Government bonds issued in late-2018, which have rates of around 3%.

Interest.co.nz in November flagged concerns over the cost of the set-up, describing it as a money-go-round between Crown entities, designed to keep debt off local/central governments’ books.

Indeed, documents released to interest.co.nz under the Official Information Act show Treasury in September 2018 told government ministers “CIP’s ability to secure financing for the infrastructure investment is less certain and more expensive” than the status quo.

Treasury told the finance, urban development and state-owned enterprises ministers that financiers will be mindful of the fact CIP’s SPV’s revenue stream is inconsistent over the long-term, coming solely from levies charged to property owners.

It said financiers will also question CIP’s ability to ensure property owners pay their levies (which aren't targeted rates but are collected by Auckland Council).

Furthermore, neither CIP nor the Crown will fully underwrite or guarantee the SPV.

So if the levies aren’t sufficient to pay back the loan, the SPV will be in default and could ultimately be wound up.

ACC is therefore essentially charging a premium for these risks.

However, Treasury said in another report that the CIP Board thought there was a low risk of default, because the levies will be secured by “first-ranking encumbrance over the land title” - meaning the SPV could enforce payment by forcing a homeowner to sell their house.

Plus, the risk will be diversified over a number of property owners, and the council rates the levies will be invoiced alongside are usually always paid.

As for the interest rate on the ACC loan, Treasury said in a March 2019 summary of a “lessons learnt from Milldale” session run by CIP that the ACC loan was “efficient and met the agreed objectives”. But in the future, “a shorter debt amortisation period may create an even more competitive environment”.

Despite the costs, Treasury believed the user pays Milldale model was successful in providing an alternative infrastructure funding mechanism.

“The general response from all stakeholders to the Project has been positive, and the lessons learnt therefore largely focus on potential refinements for future projects rather than any fundamental issues,” it said in its March 2019 briefing.

A Bill aimed at making it easier for other public or private entities to set up SPVs to replicate the Milldale model is currently before Parliament’s Transport and Infrastructure Committee.

It proposes enabling levies to be applied to existing landowners - not just those who know what they’re signing up to when they buy property in a new development, as is the case in Milldale.

Submissions on the Infrastructure Funding and Financing Bill, which Urban Development Minister Phil Twyford is in charge of, are open until March 5.

I'd rather just have the extra $15,000 cost added to the section price and then roll that into the mortgage.

This weird extra fee is going to be off-putting for future buyers and 5.37% interest is quite a bit higher than what banks are offering now.

Also whatever the figure is, they would be hoping you say that, because they have just got you to agree to pay that much more than its valuation price.

Who's going to buy these sections if people are going to baulk at the infrastrcture costs? "Putting it on the tab" doesn't make much sense.

It's going to be paid either way, at 5.37% interest rate over 30 years or you can plonk it on the mortgage where you can currently easily get 3.5% rates.

Sure over the longer term the mortgage interest rate might end up higher, but that's not likely in the next 5 years at least.

Not if people don't buy the sections. Nothing gets paid.

In which case the loan from ACC is still taken out by they have no way to repay it because no sections were sold.

it is a financial construct to avoid having the costs in the Council books, that is all it is, and the penalty to the landowner is the additional costs of funding the higher interest rate and covering the management fees and probably also covering the costs of any defaulters in the mix.
The landowner could not care a Hoot who finds the funding in the first place, he only cares about how much it will cost him, and the Council funding it directly and recovering through rates would undoubtedly be a lower cost to the landowner, probably more like $800 per year than $1000.
So the landowner is paying through the nose for the stupidity of the Council funding system

I really have to question why ACC is allowed to be making these investments when they should be focussed on paying their clients the entitlements they ought to be receiving instead of declining cover and or engaging in the vindictive and immoral litigation activities I keep seeing in the media.

We want immigrants here , in big numbers so we can get cheap labour , keep wage costs down and keep demand for housing up ( as well as house prices ) , but the Government does not want to pay for the infrastructure needed to support this ever -growing flow of immigrants ...........

One of my German friends was telling me what they do there. Only municipalities are permitted to develop residential land. This is fair because then they bear all the development costs and can fully recover those in the sale of the sections. Our system is unjust. A bunch of speculators profit between the value of farmland and the sale of the sections. Only the final developer pays part of the cost of providing the infrastructure, but a substantial cost still falls on the municipality. A classic case of privatised profits on the back of public debt.
He was also saying that first time home builders are sold sections at half the full price.
Imagine how the picture would change if we had a system like this in NZ.

Thats quite common across many western European states, they learned after ww2 that inequality leads eventually to war. I think the cool part of the system is that the municipalities have control over all the planning and specifications so you end up with a society that you can truly live in not a walled off eyesore and a slum down the road if a rogue developer moves into your neighborhood. They also offer houses atop leasehold land so all you have to pay for is the house if you buy it. That sounds good doesn't it! Our 'society' here is shortsighted and cares only for profit, the neoliberal paradise. The neo libs are working hard to grind down those longsighted socially responsible underpinnings in Western Europe and elsewhere that gets in the way of quick money though...one more monetary crisis could set it all on a downward slide....recent stats out of Sweden are alarming as inequality is increasing dramatically there...where's Abba when you need them?

Allowing Crown agency investment funds to be put into an SPV to facilitate this (i.e. make a profit) rather than issuing Govt infra bonds = bloody terrible idea!

+1 - Interest.co.nz in November flagged concerns over the cost of the set-up, describing it as a money-go-round between Crown entities, designed to keep debt off local/central governments’ books.

I support targeted rates / SPVs but as a last resort.

The central government / local government (they are simply different arms of government) income /cost split is somewhat arbitrary and doesn't necessarily match where costs fall, i.e. local government may have too much cost / too little revenue. It would be better to sort this out first and be able to borrow at government interest rates before resorting to more complex mechanisms.

Great quote from Buffett this week.

“It makes no sense to lend money to the government at 1.4% when it is government policy to have 2% inflation.”

I hope they don’t then have to pay full price for their water? Otherwise they are basically paying to fix our ageing pipes and our billion dollar central interceptor etc while also paying separately for their own stuff.

I firmly believe that Milldale will be a disaster due to this. Who would pay more to live there vs Millwater?
But its the last bit which is truely scary. Levies to be applied to existing landowners! That is a huge theft of property rights. Way worse than the cross subsidies inherent in the recent changes made by the Ak Council with respect to development contributions which is itself bad enough. Then there are targeted rates. And the way above inflation rates/ water rates/ rubbish collection fee increases in past years.
Its all getting way out of hand!!!!
If the central and local govt think that rents are going to come down in future, you just have to look at all of this stuff and you know exactly what the answer is!

Aren't roads and infrastructure something we are already meant to be paying with our taxes?

Stop paying attention and keep those thoughts to yourself.

Shaw & Co need all the money and more for CC.
$5 Tillion.
Inspite of no forecast benefits. Other than being a role model (of ?).

On whether global heating can be curbed, he says: “I think the chances are slim.” But there’s no reason for not trying, he adds. “In fact, that’s all the more reason to try.”

"It proposes enabling levies to be applied to existing landowners - not just those who know what they’re signing up to ", what, you mean just like Council rates are now? Why replicate an existing system. is this so that the Developers land will be " cheaper", and the Council will be seen to levy " reasonable" rates with this new " tax" added on top?