The Reserve Bank is not expecting strong upward pressure on house prices, but if the market did look like returning to the boom times it says it has tools in the tool box other than the Official Cash Rate it would be inclined to use.

Meanwhile, the RBNZ would like to see residential construction in Christchurch over coming years done 'large-scale,' which would help keep construction costs, and hence inflation under control.

Governor Alan Bollard told Parliament's Finance and Expenditure Committee on Thursday afternoon that the RBNZ could increase the amount of capital banks have to hold on their balance sheets, or even introduce limits on loan-to-value ratios to cool banks' ability to lend if the housing market looked like taking off.

Control of how much capital banks have to hold is a tool the Reserve Bank already has, via capital adequacy requirements it imposes on banks. However, limitations on loan-to-value ratios - the ratio of a deposit on a house to the value of the house - would be a first in New Zealand since the current monetary policy system was introduced over two decades ago.

The Reserve Bank did not see signs of the housing market returning to the boom times of the 2000s, Bollard told the Finance and Expenditure Committee.

"We see what looks to be demographically-driven rebuild and earthquake-driven rebuild, and those are both desirable things. We’re not expecting big price pressure," Bollard said.

"We don’t think New Zealanders are expecting that, and are making those decisions [on house purchases] on the basis of capital gains either," he said.

"Were we to see what looked like a resurgence of the mid ‘00s’ in housing, we’d also be more inclined to pull out some macro-prudential tools, more in the nature of requiring banks to hold more [capital] on their balance sheets, or even potentially, but I would expect only rather short-term, loan-to-value type ratios. I say only short-term because those things can be quite distortionary.”

Build large scale in Christchurch to keep costs down

Meanwhile, with house building consents starting to show signs of life, Bollard said it "would be a pity if we ran into a consent blockage, and of course in Christchurch you always ask that sort of question".

"We are hopeful that in Christchurch, for the first time, there is an opportunity to build large-scale, and try and get unit construction costs down more towards Western economy best standard. We’re expensive house builders in New Zealand," Bollard said.

The Government's Productivity Commission noted in its draft report on housing affordability in January that only five companies in New Zealand built more than 100 houses a year.

The high degree of small-scale construction that occured - ie building only three or four units in a development - was one of the drivers of high construction costs in New Zealand as that made it harder to achieve economies of scale, the Commission said. 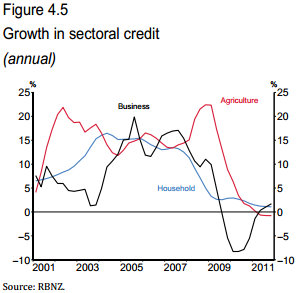 In the March quarter Monetary Policy Statement, the Reserve Bank said building consents and house sales had been gradually increasing over the past year.

"While activity remains well short of the highs preceding the Global  Financial Crisis, it is nonetheless markedly improved on the trough," the Reserve Bank said.

House prices also moved upwards in 2011, and have now almost regained the 2007 peak in nominal terms, although remain some 13 percent below peak in real terms. Given historic relationships, house building is likely to increase in the early part of 2012," the RBNZ said.

As discussed in box E in the December 2011 Statement, this could provide evidence of a change in behaviour by New Zealanders, and a rebalancing of the economy," the Reserve Bank said.

"Evidence of this rebalancing is provided by the breakdown in the traditional relationship between credit growth and house sales. A wedge has developed between the value of housing turnover and the household sector credit growth with which it would typically be associated (figure 4.6)," it said. 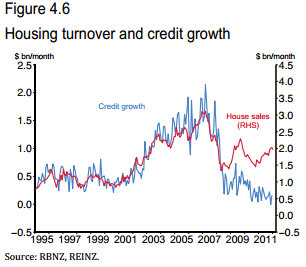 There were several possible explanations for that wedge.

"First, new homebuyers may have become more cautious over the period and increased the size of their deposits. This would be in keeping with the Reserve Bank’s credit conditions survey, which reports a tightening in lending criteria by banks. Similarly, the equity of sellers may have been reduced by the falls in house prices since 2007," the Reserve Bank said.

"This could arise from households maintaining their mortgage payments as interest charges fell over the past few years," the RBNZ said.

Finally, the wedge could in part be explained by insurance payments following the Canterbury earthquakes.

"These payments are believed to have been in the order of several billion dollars to date, which may have been used to pay down mortgages until the cost of rebuilding is incurred," the Reserve Bank said.

Households turn around savings rates, but did they splurge a bit late last year? 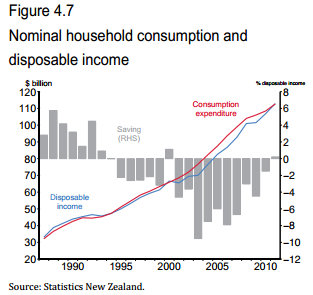 Rebalancing by the household sector was seen in the increase in the saving rate over the past few years. The official household saving rate had returned, just, to positive territory (figure 4.7).

"Yet there are some recent signs that households may have reduced their rate of saving, albeit temporarily," the Reserve Bank said.

"Retail sales growth was strong over the second half of 2011, partly a result of RWC spending. However, the level of expenditure using domestic electronic cards, and strong spending on durables, suggest some near-term strength in consumption," it said.

"It may be that this current relative strength in consumption reflects recent appreciation in the New Zealand dollar and consequent price reductions by retailers. In which case, any further rebalancing of the economy may be delayed by the current high exchange rate."

Property sprukiers are perma bulls, so hell wil freeze over before they will ever say house prices will fall.  The RBNZ has a duty of care, to make the banks profitable, in the name of helping economic growth, so it's not likely they have much motivation for a pre-emptive strike.

I wouldn't expect to see any change in policy unless M3 hits 9%+.  Considering $2 of debt is creating $1 of GDP, that will get us around 4.5% GDP growth, and allow RBNZ to act.  The only thing worth watching is M3.

With banks offering exceptional rates on long term ie 5.7% fixed for 3 years Bollard may be in for a surprise when he sees 10% property price growth through out Auckland this year.

So many mortgage approvals granted lately - no wonder buyers are queuing up at open homes even in suburbs like Mangere Bridge!