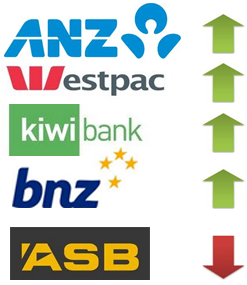 ASB, whose CEO is now targeting growing market share in the residential mortgage market, was the only one of the big five banks to see its mortgage book shrink in the June quarter.

ASB's annual report, including its general disclosure statement covering the June quarter, shows its residential mortgage book down NZ$39 million to NZ$37.391 billion in the three months to June 30.

The fall came in a period when banks battled hard for home loan customers in a low growth market by cutting advertised - or carded - fixed rates, offering significant discounts to advertised rates, paying cash incentives, and in some cases paying break fees for other banks' fixed mortgage customers in order to win their business.

Reserve Bank sector credit data shows housing loans up NZ$1.545 billion, or about 0.88%, to NZ$175.789 billion in the June quarter, a period that probably saw a fair number of customers' switching between banks. ANZ New Zealand, the country's biggest bank and owner of both the ANZ and National banks, dominated, - growing its residential mortgage book by NZ$1.09 billion in the quarter.

Despite the overall fall in housing lending, ASB grew total advances to customers by NZ$219 million in the quarter to NZ$53.002 billion. CEO Barbara Chapman told interest.co.nz last month that after 6% growth in business lending and 5% growth in rural lending in the year to June 2012, she wants to grow ASB's home loan book in the year to June 2013. Meanwhile, mortgage brokers say that from being prepared to lend 70% of the money required for an apartment purchase, or even just 50% in the case of some smaller apartments, ASB is now prepared to go to 90%, something the bank hasn't denied.

At NZ$153 million, ASB's June quarter profit was identical to the same period of last year. Although total operating income was up NZ$29 million, or 7%, to NZ$439 million, this was offset by a NZ$7 million, or 4%, rise in operating expenses to NZ$204 million, and impairment losses on loans of NZ$20 million versus a credit of NZ$8 million in the 2011 June quarter.

Obviously mountain locations without good parking, access and sun are not in vogue, even if they have celebrity neighbours!

Was that the goat herder's place?

Yes, the one next door to your boss.

Almost a bargain, if you install a cable car!

Chris_J
Thanks. I had wondered what it would go for.
Bugger. We had hoped for more craziness.
But you're right. It's a dog with fleas...and rats...that keep our cat well fed.
cheers
Bernard

Latest top 10 in QV average house value by suburbs (nationwide I must say):