RBNZ Governor tells MPs sceptical about debt-to-income restrictions they could distort the housing market, which the government's tax policies already do

Property
RBNZ Governor tells MPs sceptical about debt-to-income restrictions they could distort the housing market, which the government's tax policies already do 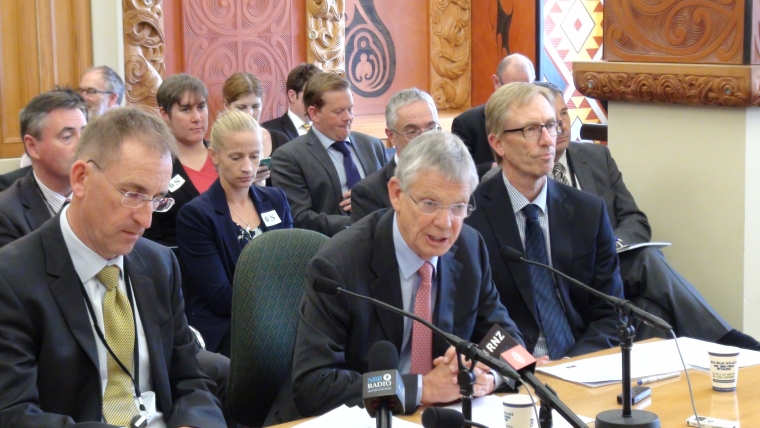 MPs in Parliament’s Finance and Expenditure Select Committee were given a quick-fire tutorial Thursday from Reserve Bank Governor Graeme Wheeler on just how debt-to-income ratios (DTIs) could work alongside loan-to-value limits (LVRs).

The announcement from Finance Minister Steven Joyce Wednesday that he had asked the Bank to do a full cost benefit analysis on DTIs before deciding whether they can be used has been widely read as the government kicking the idea into touch (LVRs are already in use).

If questions (or rather, statements) from one National Party member on the committee – Wairarapa MP Alastair Scott – were anything to go by, the party isn’t too keen on the measures:

“DTIs and LVRs distort the market,” Scott bellowed. New Zealand’s lending system is working as it should, and any interference would favour one group of borrowers over the other, Scott put to Wheeler. Indeed, on Wednesday Joyce raised concerns on how DTIs would affect first home buyers.

The Governor agreed on distortion effects: “Every regulatory intervention has unintended consequences,” he replied, using government tax settings as an example where behaviour is distorted by new measures.

He went on to explain what the Reserve Bank uses its macro-prudential tool-box for, and how LVRs and DTIs could work together.

I.e. the tools are used for financial stability and could complement each other.

ACT Party leader David Seymour is not convinced on DTIs either: He asked the RBNZ officials whether some property buyers would be able to get around the restrictions by sourcing cash from overseas. Deputy Governor Grant Spencer replied that, mostly, New Zealand housing market pressure is driven by local credit channels.

Labour’s Clayton Cosgrove got the Reserve Bank officials talking about what caps a DTI policy might have. Spencer said there would always be special cases, which is why the RBNZ would use a ‘speed limit’ rather than a fixed cap for DTIs.

Wheeler noted that in the UK, banks are not allowed to dish out more than 15% of new mortgage lending at DTIs of more than 4.5 times, giving them some flexibility to lend above the threshold.

The Reserve Bank has already received a trove of DTI data from the retail banks over the past few years. The group with the largest DTIs is property investors, not first home buyers, Wheeler reminded the Committee.

Shock, horror! DTIs might cause house prices to fall. Calamity.

If politicians were genuinely concerned about distortions in the house market then they should remove all regulations from housing and close RBNZ as both severely distort the market by way of the centrally planned economy.

What's with all this faux concern from politicians about first home buyers? They haven't given a toss about them for the last 20 years!

I think this gets to the heart of the issue:

The group with the largest DTIs is property investors, not first home buyers, Wheeler reminded the Committee

Is it really first home buyers that politicians are trying to protect?

exactly check the register of interest for MP's and many of them are housing investors, why would they bring in measures to hurt themselves, no matter how good they are for the country
http://www.radiolive.co.nz/REVEALED-Look-at-how-much-property-our-MPs-o…

And stuff the next generations, they can fend for themselves.

It amazes me that NZ features so well for "freedom from corruption" in international indices, when such blatant corruption occurs openly in relation to the housing market.

they got some loans too

DTIs would be the best thing a first home buyer could wish for.

Whereas for an investor, a house earning ~$40k per annum in rental income could only support a mortgage of $200k.

Guess what will happen to house prices.

But National are worried about what percentage of their voter base are investors...They're banking on the fact these outnumber and outvote young Kiwis.

Basically, a cynical selling out of young Kiwis to hold one's grasp on power.

I blame the people that would vote for National on that basis. They actually don't care that they're crapping on their own children and grandchildren. Their actions, as voters, speak louder than words.

In the US it's often referred to as "F... you, got mine." I often wonder what's driving people to behave like that.

$750k would buy a nice place in Aucks even, once the investors fail/pull out. I can understand random Joe public commenters on this site thinking that DTI's would hurt first home buyers, but politicians??? come on, this is primary school maths...
Plus, DTI's have "fixed" benchmarks (you can't estimate last year's IR3 return), whilst LVR's rely on 1 of the 2 variables being guesstimates

"LVRs are aimed at lowering systemic risk in New Zealand’s banking system, by reducing banks’ credit exposure, Wheeler said. DTIs, meanwhile, are used to reduce the risk of borrower default."
Whaaaat??? Talk about a gross oversimplification!!!!!!!!!!!!!!!
Surely both do both.
"The group with the largest DTIs is property investors, not first home buyers, Wheeler reminded the Committee."
Great bring on DTIs!!!! Quickly!!!!

Sounds like to me that the Politicians did indeed get a tutorial on how financial regulations work in the real world not in the Political E utopia that they think they live in. perhaps the 120 of then could fill in their day learning Economics instead of being asleep in their chairs.

I'm hoping we can get someone with financial nous to teach Stephen "predominantly about supply" Joyce about Economics 101: Supply AND Demand.

Simple concept, the government's job is to project and service the public.

DTI's will help protect the public from becoming financially over burdened, it will enable the continuation of "normal" home ownership and the average person to continue to spend in the general economy.

Protecting the banks (mostly foreign owned entities) from becoming over exposed is a good idea, but their management should be responsible for their losses. When the government supported them financial or there actions impact the financial security of the nation the government should take action to manage the risk. Through the NZRB they have done so.

It is definitely time to complete the task and re-instate DTI. This will have the added benefit of restricting the ability of some speculators from gambling in the housing market. I presume the introduction of DTI would also impact foreign buyers as they would need to demonstrate income, would the local banks borrow on foreign income sources that are subject to currency rate change?

Yes. DTIs will ony really hammer the specuvestor debt based ponzi. Overall not a million miles in enforsing constructive used of debt based capital but in a slightly different way to TOPs tax policy. I will be voting for whoever can overide their own self interest and leads with it.

NZs property tax treatment needs changing, and this would be a great start on addressing that.