Statistics New Zealand says there were 2926 new homes consented nationally in March, up 5.3% on the same month a year earlier; Auckland had 1082 consents, up 14.9%

Statistics New Zealand says there were 2926 new homes consented nationally in March, up 5.3% on the same month a year earlier; Auckland had 1082 consents, up 14.9% 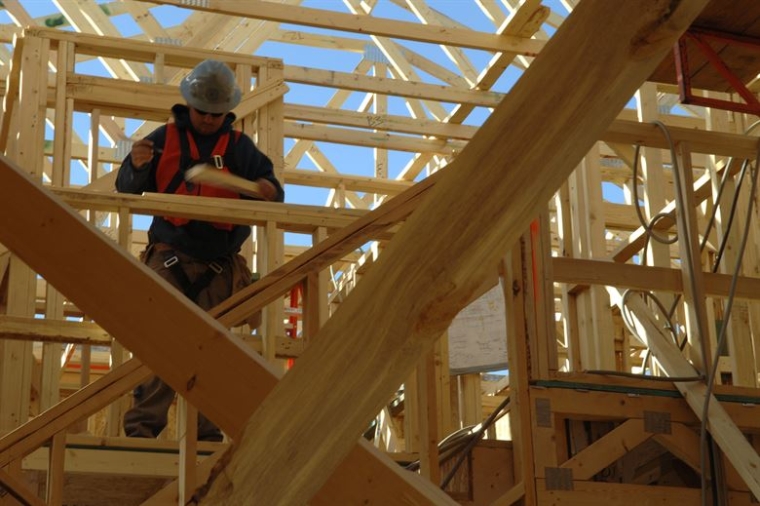 A spike in high density housing consents helped push up the nationwide number of building consents in March to 2926, up 5.3% from the same month a year ago.

The rise follows a recent stalling in the growth trend for housing.

But the latest figures are boosted by higher density housing construction, such as townhouses, flats and units, apartments, and retirement villages.

"Building demand for town house development also increased, while the number of consents issued for standalone houses was flat over March.

"While March apartment consents were strong, on a trend basis demand for new apartments remains relatively muted compared to the previous building cycle, with strong growth seen in townhouse construction instead.

"Both regions are undersupplied and new building rates remain below requirements for population growth." 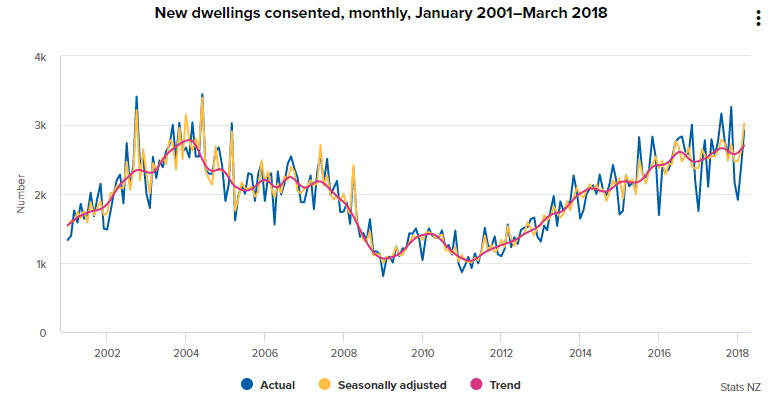 Statistics New Zealand said the breakdown of consents during the month was:

Regional new dwelling numbers in the March 2018 year were: 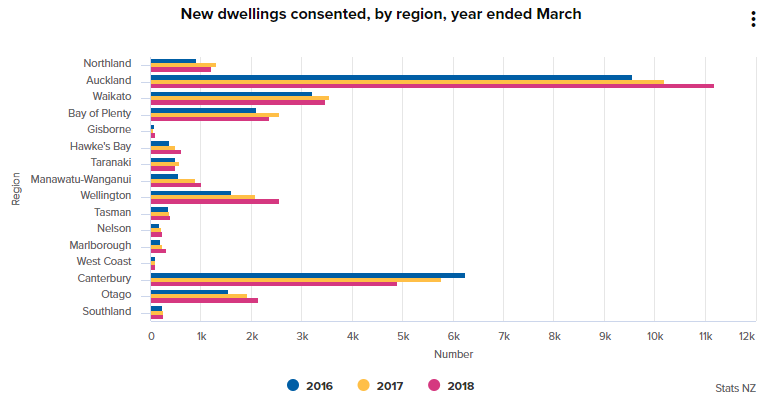 "This is despite a significant number of demand supports for the sector, which include pressures on accommodation capacity, low vacancy rates for office buildings, strong demand for commercial and industrial properties and earthquake-related works."

The trend towards "high density housing" is set to continue, although it will probably take a whole generation's time to accept that most New Zealanders cannot afford a standalone house on a quarter acre section

I personally don't get the desire for a quarter acre section. Who has the time for that amount of gardening? If I had a double story, detached house on half of that, I would consider myself very happy indeed.

I would somewhat prefer an apartment (though it's very close between that and a house). I prefer the lifestyle of a decent apartment next to a nice park and in walking distance to city amenities. But Auckland's apartment market is a bit broken - overpriced relative to other cities, expensive body corporate costs and dodgy NZ construction sector builds.

The trend towards "high density housing" is set to continue, although it will probably take a whole generation's time to accept that most New Zealanders cannot afford a standalone house on a quarter acre section.

Many NZers already live in 1/4-acre sections. I doubt they will disappear. Whether or not they will be unaffordable in the future is unknown. Your premise is based on the status quo being impregnable. However, there is no property bubble in human history that would support this. Typically when countries do their utmost to promote bubbles or protect the status quo supporting asset prices, the greater the market distortions, which leads to severely unbalanced economies and negative consequences. At that time, it would be no surprise that asset prices adjust.

In Auckland 1/4 Acre section in the inner suburbs are getting rare, infill housing has been built on most, and will continue to do so. People are asking $400k for 1/20th of an acre with resource consent in Otahuhu... so in any halfway decent suburb 1/4 of an acre section will be an easy $1.5m+

OK, assuming what you say is reality, that doesn't suggest or prove that the status quo is impregnable.

It doesn't prove that cows can fly either

J.C. 1/4 acre do disappear, typically when they are subdivided into smaller lots, hence "high density housing"

Huzzah! this is great news. Keep building NZ, we need those houses!

Fingers crossed that incoming high density is actually liveable for families and anyone else. Too much of what's been developed over the last ten years or so is designed as student hutches or speculative trading tokens, no so great when required to function as accommodation.

That is the most concise summary of 60% of todays posts I've seen so far.

Goodness. Just looked at the figures on line. Tasman District council consented 61 dwellings in March. There is not a section anywhere to buy because they have all be snapped up within hours of subdivisions coming on the market. This is double the construction rate predicted in this years TDC long term plan. I better buy some more properties there because a shortage always pushes up the prices.