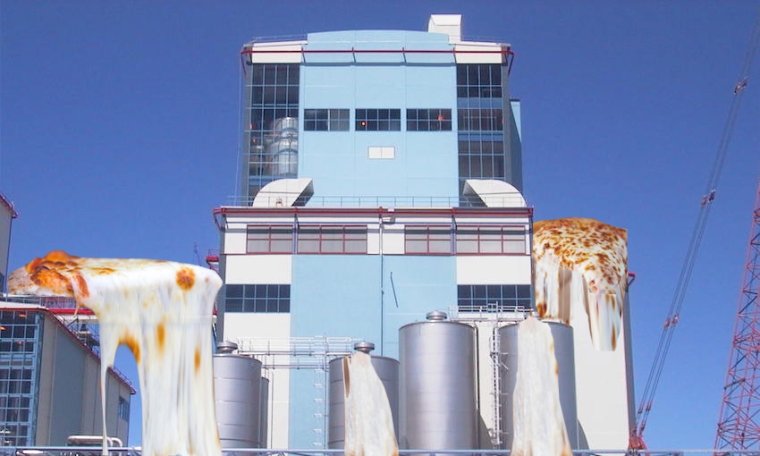 Now its $240 million mozzarella cheese plant at Clandeboye near Temuka is sitting close to idle thanks to lack of demand.

The Clandeboye dairy factory’s third line making Fonterra’s “secret recipe” mozzarella was opened to much fanfare a year ago, with the co-operative claiming it was able to produce enough of the cheese to top half a billion pizzas a year.

Fonterra has described the cheese as “the jewel in its foodservice crown”. Scientists at its Palmerston North Research and Development Centre found a way to make mozzarella in hours, rather than the months it takes to make the cheese traditionally. The cheese was already topping half of the pizzas in the fast-growing Chinese market, and the new Clandeboye plant had been constructed to meet demand, the co-operative said last year.

But this week Fonterra conceded ‘Mozz 3’, as it’s known, has been running at just 25% capacity since the start of the milk season on June 1 because demand for the mozzarella has not been as high as initially forecast.

Ads Hendriks, the Federated Farmers Dairy Industry representative for South Canterbury, says he first became aware that Mozz 3 was not operating as hoped at an open day at Clandeboye earlier in the year.

“What I understood is they overestimated, probably, that market segment at this stage. It’s not exactly wonderful planning if you make these big investments, but what can you do as a farmer? There have been a few silly investments.”

The dairy industry is about to hit peak milk season, and Hendriks understands Fonterra will start firing up the plant to get rid of the milk. “There will be quite a bit of mozzarella where there’s probably not yet the market, so it’s a little bit of a concerning thing.”

Fonterra is about to hit peak milk season. (Photo: Fonterra).

Dairy farmers have good reason to be disappointed in Fonterra’s performance. Last week the company announced it had made a net loss after tax of $605m for 2019 – its second-ever loss after the $196m in red ink it delivered last year. The loss was largely due to a $826m revaluation southwards of its businesses, and came with an admission that it had got too big for its boots in trying to be a global player.

Agricultural economist Peter Fraser says capacity utilisation in the dairy industry is important because of the high fixed costs of the plant, and normally Fonterra is good at it.

Foodservice products like mozzarella are sold to particular customers on a business-to-business basis. “You don’t just build something and then hope people will turn up and buy,” Fraser says. “Fonterra’s really good at customising the product just to what the business actually needs. When they’ve built a brand new plant like that it kind of suggests something’s gone wrong somewhere.”

Of course farmers are concerned, says Michelle Pye, the Southern Canterbury representative on the Fonterra Shareholders Council. They had been aware about the under-utilisation of the third mozzarella line and had asked numerous times what was going on. “It was raised at a recent meeting in Ashburton where we were given a clear answer about volumes and expectations, which went a long way to allay farmers’ frustrations and help farmers understand the realities of business.

“You need to build capacity before building demand and the plant was never built on the basis of it operating at full capacity in the first few years,” she says.

Fonterra’s director of New Zealand manufacturing, Alan Van Der Nagel, says demand for its mozzarella is continuing to grow, and without the third plant at Clandeboye it would have been supply-constrained and missing out on profitable sales.

“We are expecting significant quick service restaurant demand to come on stream out of Mozz 3 during the next six months,” he says.

Fonterra CEO Miles Hurrell did not refer to mozzarella or Clandeboye specifically at the annual results announcement last week, but said while margins in its foodservice business were up, sales volumes were down.

The co-operative has announced a whole new strategy which sees it turning away from trying to be a global player, focusing instead on producing top quality dairy ingredients and foodservice products.

It will create new opportunities in foodservice, including developing markets particularly in Asia Pacific, the CEO said.

“This focus on dairy ingredients and foodservice will see us playing to our strengths and driving more value from the parts of our business that consistently perform,” Hurrell said.

*Maria Slade is The Spinoff's business editor. This article first ran on The Spinoff here and is used with permission.

hard to juggle the anticipated increase in demand with the timelag in construction of the plant to handle it,better to have overcapacity than being unable to meet demand.pizza demand is growing,cheap and quick staple for some.

Cheap mozzarella... it isn’t all bad

Its food service grade cheese, in my opinion, we tried it and avoided it afterwards.
Be alright as a pizza topping, the other flavours would mask it, but we were doing cheese toasties.

I agree, we had some left over from home made pizzas one night so I thought I'd grill it over my Nachoes.....

So they reckon there'll be a over supply of mozzarella. Impossible.

Nothing as comical as a bunch of farmers telling a big corporate how to run its business...what next? Are they gonna give Fletchers advice on how to re enter the vertical construction sector and run at a profit? Wonders never cease! I would think those farmers should stay behind their own fences and let the guys with the manufacturing and sales skills do what they are paid for.

Your arrogance defies belief, farmers provided all the capital for fonterra I think they entitled to raise concerns and make comments

Its a cooperative and the farmers are getting good payouts thanks to the business side of the co op. $20 billion in revenue doesn't happen simply because you fill your vat in the morning, it has to be processed and sold first.

" let the guys with the manufacturing and sales skills do what they are paid for."
If said guys (and girls) had done what they were paid for Fonterra would be a profitable company.

Your statement is nonsense, see my rebuttal in the post above

What do you do The_4th_estate? You are an apologist for and protector of Fonterra on every topic.......I smell a dirty little Fonterra Comms rat.....

I suggest you get involved with some projects involving Fonterra, then you'll know how much room for improvement there is in the organisation.

Speirings took off with the IP on mozzarella is the word on the street.

Seems to be, if you go back a bit, when Fonterra became Fonterra, in place of the unsexy Dairy Board moniker, it was a harbinger of doom.Perhaps they should have opted instead, for a name such as Cassandra.

Or the Benny Hill mispronunciation of that.

The money wasted at each factory is incredible.
The milking windows, the transfer stations, the amount of contractors and how many middle management they have and that s just one department

“The dairy industry is about to hit peak milk season, and Hendriks understands Fonterra will start firing up the plant to get rid of the milk. “There will be quite a bit of mozzarella where there’s probably not yet the market, so it’s a little bit of a concerning thing.”

And therein lies the Fonterra problem, farmer facing, not customer centric.
It should be restructured as a commodity company and New Zealand only.

"Secret recipe mozzarella" is not mozzarella. The consumer trend is towards real food and away from fake food. So fake food mozzarella is left on the shelf.
Just like the "not milk" they sell. Have you noticed the massive increase in availability of the real stuff, that has occured in just one year.

It's like most nz made parmessan, yes it's a cheese, yes it's hard, no it's not parmessan, very weak flavour, doesn't taste at all like the real stuff.

I dont understand why we don't as a country build a reputation for high quality cheeses instead of frankenfoods. It has worked very well for the wine industry.

Same with our sour cream and yogurt, full of gelatine and artificial thickeners to give it the texture somewhat reminiscent of the real stuff

Bingo I've noticed this shift in preference too.