Selling high quality dairy products into China comes with all sorts of different tensions, from big power rivalries to dealing with suppressed consumer suspicions. It is a high risk trade even with exemplar products

Selling high quality dairy products into China comes with all sorts of different tensions, from big power rivalries to dealing with suppressed consumer suspicions. It is a high risk trade even with exemplar products 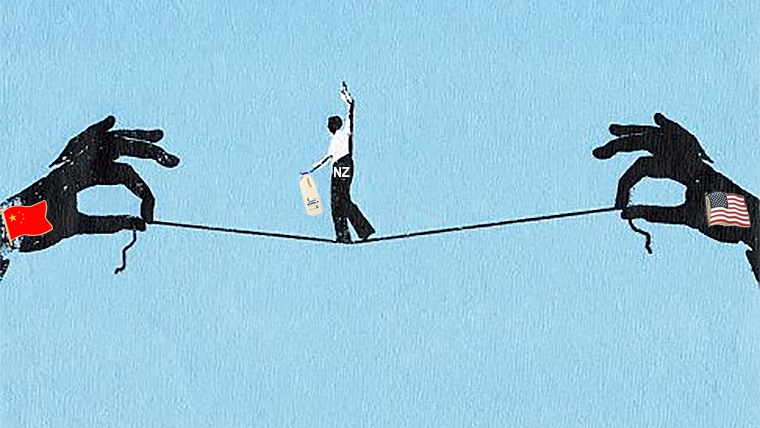 With our Government now falling into line with the other ‘Five Eyes’ partners by annulling the extradition treaty with Hong Kong, the risks of upsetting the Chinese authorities raises its head.

The delay in the declaration has probably been wise as it has allowed international focus to largely move away from the politics around Hong Kong and China and has not rubbed salt into Chinese pride. The more ethically minded among us may feel that we could have acted sooner and may have made more ‘noise’ about the injustices being meted out by the Chinese Government on a number of fronts. However, the New Zealand Government has been walking a narrow tight rope stretched between not wishing to upset China and losing our largest trading partner and upsetting our traditional allies and the benefits that they bestow.  (This column could be read in conjunction with yesterday's article).

The issue has been well discussed in the recent past but it is a reminder of how easily led the Chinese consumers are, and how well they respond to opinions passed down from up high.

Currently it is government ‘policy’ that they should drink more milk to strengthen bones and boost immunity. Quoting a China news source; Parents “should prepare enough milk and eggs every morning for your children…no congee should be allowed as breakfast,” said Zhang Wenhong, a doctor at the infectious diseases department at Shanghai’s Huashan Hospital and one of China’s most outspoken critics of the nation’s diet since the start of the Covid-19 outbreak.

It is releases like this that has led to the rapid increase in the consumption of dairy products in China.

Currently milk consumption is 34 litres per capita, still only one third of what countries like New Zealand consume but growing and showing what the potential of the market could be.

However, what the Government giveth it can also taketh. A case in point is what has happened to one of China’s leading alcohol producers, Kweichow Moutai. It lost US$25 bln in value after a comment on a Government controlled WeChat account just happened to mention that Moutai’s products are often involved in the country’s official corruption cases and used for bribery. Criticism doesn’t even have to be overt in these days of social media and innuendo is enough to have a heavy impact on targeted companies.

Closer to home, Yili and Mengnui (China’s largest two dairy companies with Yili having considerable interests in New Zealand, notably Westland and Oceania) have come under scrutiny by some. The Sanlu melamine scandal of 12 years ago is still fresh in the mind of many Chinese consumers and they are quick to pick up the slightest sniff of a wrongdoing. So, when a WeChat post headlined “Six major sins of Mengniu and Yili, which the media dare not tell, so I’ll tell” goes out, many take notice.

The article ‘exposes’ the decades-long history of China’s two dairy giants, Mengniu and Yili, accusing them of adding various chemicals, such as fatty powder, whey powder, and melamine to their milk when their gross profits were as high as 70% or even 80%, making such practices a tacitly recognised hidden policy of the country’s major dairy enterprises. The article also revealed that the two companies had pushed for changes in national dairy standards and lowered the quality and quantity requirements of milk products for their own benefit. The article also accused the two companies of having a poor production environment, deliberately raising the price of milk powder, exploiting dairy farmers, and neglecting the interests of consumers, resulting in a “complete decay of China’s dairy industry from its source to its end”.

In this case the Chinese Government appears not to want to see the major domestic dairy players brought into disrepute and the original WeChat article was swiftly deleted, by force. However, screenshots of the article went viral on social media, before being deleted too. Wang, the author, was abruptly arrested but was released the following day. To give an idea of the coverage, Yili normally gets about 900,000 WeChat searches daily, but these flew up to 21 mln on 20th July when the post was being distributed. Likewise, Mengnui went from 1.5 mln to 15 mln.

In this case social media has strengthened the place of imported milk products into China but it also highlights how easy it is to lead the consumer and their spending behaviour. Whether there is any truth in the claims against Yili and Mengnui is unclear but the point is that scrutiny food, and in particular milk, is in the Chinese psyche.

So, back to the initial comment about the tight rope the our Government has been walking. To date it has been a successful passage but as China increasingly thumbs its nose at international opinion (or much of it) and as the USA tries to wrestle its place back to where Trump believes it should be, this passage New Zealand is walking is going to become increasingly difficult.

Rightly or wrongly as an exporting nation we can only hope that a) China values the quality of our food products and b) has bigger fish to play than us.

One should also recall that old proverb, when hoping for the crocodile to eat us Last: "Kill the chicken, but make the monkey Watch'.....

Or don't bite the hand that feeds you.

The big picture is that the US paints itself as democratic and advocates free market theory is patently a big lie. It is only vested interests that are Trumpeting this have.

Their government has been controlled by big money and companies for a century or more. Most of their politicians are multi millionaires, and while they (largely) have a two party system, the parties deliver much the same; reflected in the growing inequality. Their Federal Reserve is a private business for the banking cartel, and their defence (or should I say attack) is largely a private business to protect oil and money interests.

What one can learn from this is no system of governance is perfect, however if you look back through history most evolve because you cant suppress the masses for ever. Empires don't last more than a couple of hundred years (on average), and change is upon us whether one likes it or not.

Like any good business person will tell you, the best game to play is to keep your feet in us many camps as possible, and diversify your markets, so you don't get dominated by your customer, so if one leaves it doesn't take your business down with them. If you dont agree with çustomers wider operation, diversify away from them. For that reason, you wont be seeing me invest in dairy farming anytime soon.

NZ is safe. No need to worry.

No need for NZ to pick a side yet but do understand any issues related to China's sovereignty are of grave importance.

Any persistent comments, gestures, and doing to undermine China's sovereignty will guarantee retaliation and economic sanctions.

All in all, mind your own business and the business that matters to you and FULLY understood by YOU.

I think we just did pick a side xingo.

Hey Xing, or is it Wang? We at last agree on something. NZ certainly has nothing to fear from China. In the past we did no trade with China. Now we trade with China. In the future we may or may not trade with China. No big deal. If China threatens to stop sending us K-Mart crap I won't be shaking in my shoes. If our Chinese owned dairy factories can't get access to China I won't care. If our Mackenzie Country dairy farms (for crying out loud) have to go back to semi desert dryland merino grazing farms I won't care. Life goes on. I am old enough to remember UK joining the European Common Market. Not the end of the world. Now they are leaving it. Business takes it's cycle. Money flows around, changing it's direction at surprisingly frequent intervals. Great fun.

You might care when our terms of trade go tits up, our dollar drops and all our imports including fuel get more expensive.

That would force an acceleration of our transition to an electric fleet. Not a bad thing.

Gimme a break Brock, your little puddle skipping Leaf doesn't cut it in the commercial trade or rural world. Urban dwellers have the luxury of established public transport so if they were that worried they could take a bus/train. Also if our dollar drops said puddle skipper will get more expensive and thus discourage the urban virtue signaller

May be unwinding of globalisation is the right path.
Our society is so full of junk, short-term, poorly-made, fashion-item, marketing-spun, unnecessary purchases! Return to what matters in life. Trade with those that provide necessary raw materials if your nation cannot produce. Give your fellow man a purpose in life - productive work.

"Rightly or wrongly... we can only hope"

Let's contemplate stepping back from the foray, to catch our breath, to think deeply, and courageously re-frame what the real long term may look like for NZ global exports
(spoiler alert which we all know already: at this stage, markets look hugely uncertain for the next decade).

Continuing to focus on how we might innovate, on maintaining and leveraging that global trustworthiness - that, in itself, is de-risking - and, let's continue to walk the talk, to carefully maintain integrity in doing so.

It's not dreaming. It's begun.

It's achievable - with the right posture, hearts and minds. It's about mutuality. About moving toward those we can look to grow trust with, not heading toward the biggest immediate bucks (tempting thought that is).

Has life gotten better for the average New Zealander since we sold our soul (and everything else) to the Chinese Communist Party?

That's a resounding no.

Ahh well, at least we still get to laugh at their tragically insecure press releases and feigned offense (at least until Labour make that "hate speech").

It's gotten better for those who own large businesses. And that's the driver.

Fonterra for instance should have done well out of this FTA but didn't because they're inept. But they had their chances to capture a big portion of a huge market.

Wasn't aware the CCP was actually buying stuff here Brock. Or is that just more of the usual unsubstantiated xenophobic rhetoric that seems to permeate this site on an unfortunately regular basis?