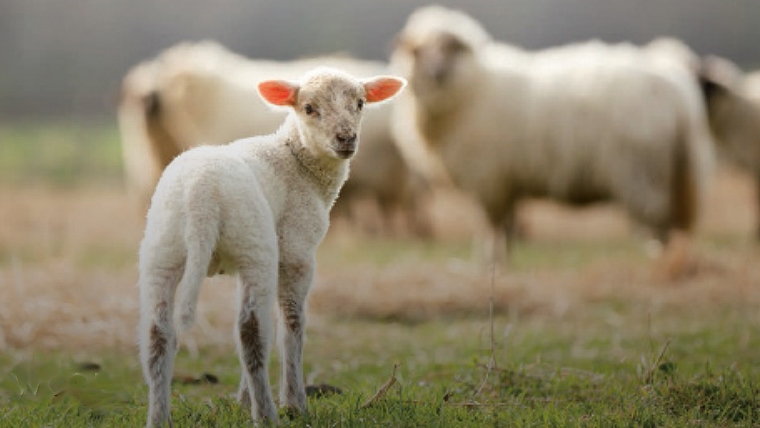 I was listening to an RNZ radio program about the future of meat in regards to climate change and diet etc., and a fact that the Chinese government wants the average meat consumption to reduce by half by 2030. This surprised me as I thought I would have heard more about this.

However, when I did a bit of looking this pronouncement was made (way) back in 2016, when I was more preoccupied doing other things. However, it did whet my appetite to have a look and see how China is doing in its meat reduction plans.

In 2016 the program said the average Chinese was consuming 65kg per year and if allowed to continue as business as usual, they would likely add another 30 kgs on to that which would take it up to around 95 kgs per year.

To provide some context to this have a look at the 2013 numbers. China was at 49 kg and back in 1982 way down at 13 kgs, showing how rapid the Chinese have moved to a more affluent and western meat orientated diet. 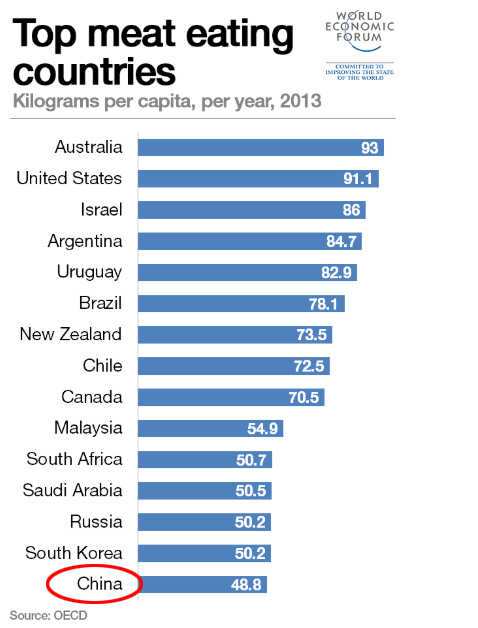 At that time, the reasons given for the drive to reduce meat intakes were dietary (obesity is still linked with meat) and climate change.

One thing that did quickly leap out at me was that whoever at Radio NZ had dug up the 65 kg pa figure had grossly overshot the mark and the amount in 2016 seems to find more agreement at around the 50 kgs - 55 kgs range. (see graph below). The other point this graph illustrates is that there is absolutely no sign of any reduction in real and forecasted levels post 2016 which may have indicated some sort of response the dictate from ‘up high’. In total, part of this is no doubt due to the growing affluence of the middle class and so while individuals may (unlikely) be eating less there are far more in total consuming meat than any previous period. 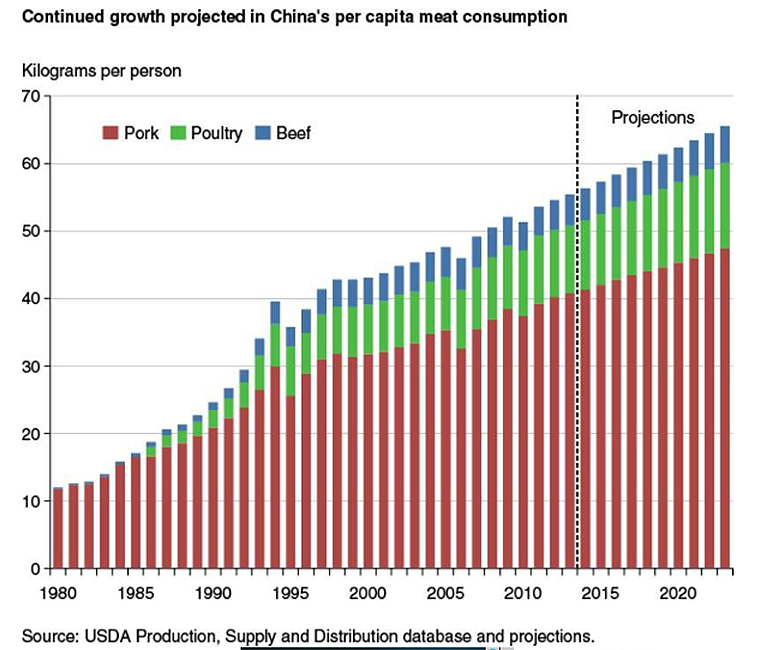 Along with the additional consumption, New Zealand has benefited from, and continues to increase meat exports into China. We are all aware just how critical China is and has been to our primary industry economy and the lamb exports graph below is very similar in shape to the beef graph (not shown here) and shows how reliant we are on this market. I suspect if any changes are currently occurring in the 2020 figures it will show that the China band has grown even more. 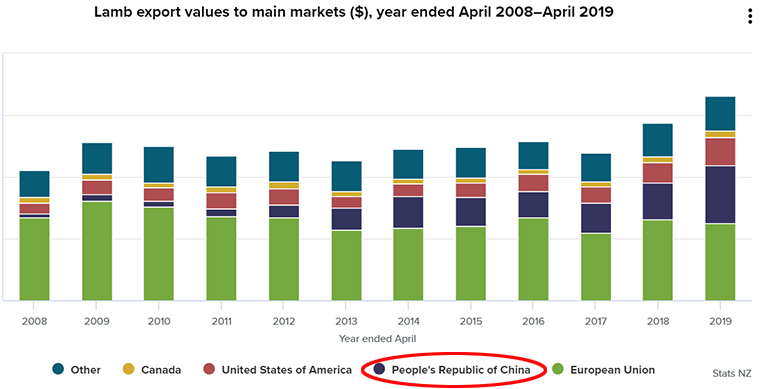 None of what has been shown is particularly new but what did come home to me was that, for once, the Chinese people have not responded to their leaders wishes. It does provide some reassurance that with the chaos and uncertainty created by the COVID-19 pandemic, the Chinese may still provide enough underpinning to keep some resemblance of demand for meat products.

One thing the CCP will not want is an openly discontented nation due to empty shelves in their supermarkets. They have enough external problems to worry about. Hopefully their pockets are deep enough to include New Zealand’s supply. One thing in our favour is our COVID-19 free status as the Chinese are nervous about purchasing meat from processing companies that have been heavily affected by the virus. This not only largely affects South American exporters, but also the USA and Australia (for perhaps different reasons) have difficulties in accessing the Chinese markets.

Rabobank have published an interesting summary of how they see the world through its New Zealand focus and did provide some reasons to be concerned about China. China have been mooted as the “first in ,first out” economy and most data support that however the ‘food service’ sector (Restaurants and hospitality) is still lagging and while ahead of the US and Australia they still reflect just how consumer patterns appear to have altered. People are more conservative and ‘eating in’ more. This doesn’t necessarily cut New Zealand out but much of the meat and higher value foods ended up in the food service sector. 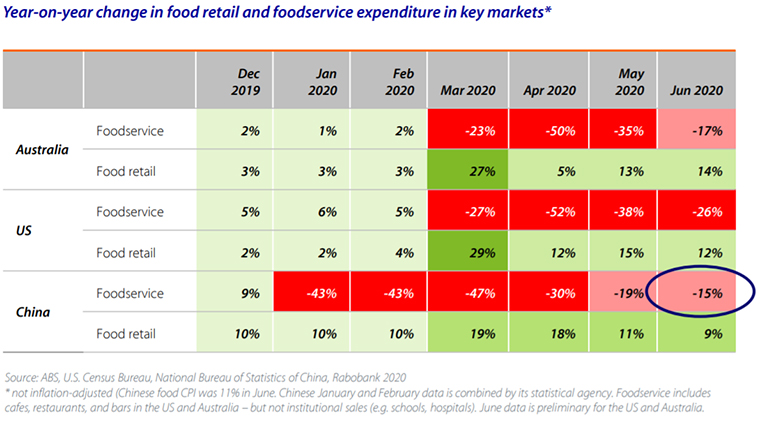 As if on cue, the latest GDT auction came and dropped -5.1% overall and generated surprisingly little comment in media circles. Whole milk powder prices dropped -7.5% with even slightly higher reductions on product being shipped further out.

This is the largest fall for a considerable time and makes the +8.3% increase a couple of auctions ago look a little more like an anomaly. Part of the fall in prices may simply be a response to increased volumes coming onto the market as sellers try to get rid of stockpiles before New Zealand (and Australia) start getting into spring flows and increasing the supply.

The banks are still holding the line on their farmgate price predictions. However the next couple of auctions have now gained greater importance as some sort of predictor for the coming season and with the recent trends taking a knock, the dairy industry will now be just that bit more nervous.

With the first of next weeks meat schedules being released they at least are holding the line with SFF sticking to ‘No Changes’ for yet another week. Most times there is not a lot of difference between companies and hopefully this continues.

"Chinese milk powder imports fell short of last year’s substantial volumes, but they are still higher than most years. New Zealand accounts for the lion’s share of China’s imports, but last month they ceded a noticeable share of the skim milk powder (SMP) market to the U.S. and several European nations. U.S. SMP is the cheapest in the world, and it is becoming even more competitive as the dollar weakens. But domestic demand is worsening. Both spot milk and WPC 34% are cheap, and they are edging out nonfat dry milk (NDM) at the margins. This week CME spot NDM slipped 1.25ȼ to 97.75ȼ."

As long as NZ can remain mostly corona virus free, they'll be nothing to worry about in regards to meat exports. Has this article also factored in that China is regularly effected by pathogens such as Swine Flu that has a huge effect on their internal markets not to mention all the natural disaster like the recent flooding that has effected lots of their farm lands.

Recent news article from the CDC: New swine flu strain in China a ‘potential pandemic concern.’ "Researchers conducting surveillance on pigs in China found genotype 4 (G4) Eurasian avian-like H1N1 viruses have been detected since 2016, as they reported in Proceedings of the National Academy of Sciences."
https://www.aappublications.org/news/2020/07/08/swineflu070820

One factor here is that up until recently most Chinese were happy enough to eat the awful bone and gristle bits of animals. Nowdays their standards are slowly rising so that prime cuts when available are being eaten. This will work in NZ's favour. Because we producing nice muscular cows who actually have to walk around to eat grass.
However I do believe that NZ does also sell some quantities of offal to China....
Conversely in my area in Auckland, if you buy meat from a supermarket in a Chinese populated area, the meat sold is very often awful. Tough as old boots. Meeting a market I suppose. I buy meat from a primarily European area and it is much much better.