High-protein animal feed based on insects has major potential, claims Rabobank. The next challenges are updating regulation, and building scale, so that the environmental benefits can be delivered

High-protein animal feed based on insects has major potential, claims Rabobank. The next challenges are updating regulation, and building scale, so that the environmental benefits can be delivered
16th Mar 21, 1:35pm by Guest 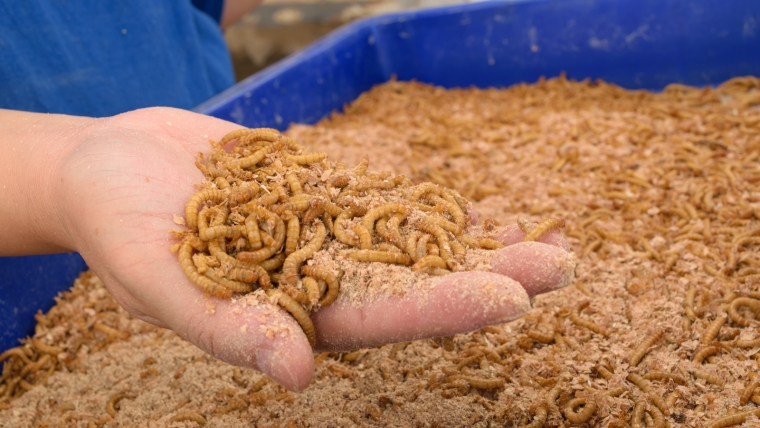 Insect protein is creating a global buzz, with demand for the fast-emerging ingredient in the animal feed and pet food sectors expected to reach half a million metric tonnes by 2030 – significantly up on today’s estimated market of 10,000 metric tonnes, according to agri banking specialist Rabobank.

While the potential for increased human consumption of insect protein has grabbed most headlines to date, Rabobank’s recently-released global report No Longer Crawling: Insect Protein to Come of Age in the 2020s outlines the nutritional, functional and environmental benefits of insect-based nutrition and the value-adding potential in this fast-developing animal feed market.

A high protein content (from 50 to 80 per cent dry matter basis) ensures the health benefits of insect protein as a feed ingredient to animals, the report says.

While the benefits created by insects building circular food systems – because of their ability to upcycle low value agri-food material (such as food waste and residues) into high-value proteins and oils – are also being recognised.

Currently, pet food – primarily for cats and dogs – is the largest market for insect proteins, followed by the aqua-feed (fish) market, with potential in the poultry-feed market also promising. The report says that when local, underutilised resources – such as food waste and residue – are used as a feed substrate (base) to farm insects, not only is the food-waste challenge addressed, but a local feed production system is created and the feed supply chain shortened.

The small environmental footprint of insect farming – which requires less water, land and production time compared with other species – also makes it an attractive option.

“However, in our view, insects have a larger potential as feed ingredient than as a direct consumer food in the next decade,” she says.

Despite the many positives supporting the growth of insect protein as a pet food and animal feed ingredient though, some major challenges exist that are currently preventing the insect farming industry from “taking off”, according to the report. These include limited scale, high costs and prices and legislative barriers.

“The industry’s first challenge is the lack of scale”, the report says. While high costs and therefore high prices are limiting the demand for insect protein.

Decreasing costs and prices are key to increasing demand for insect protein, particularly in aquafeed markets, it says.

However “scale is coming to the six-legged livestock sector”, the report says, backed by investments and partnerships, with the “insect sector” having received significant investment, particularly since 2018, enabling companies to build larger-scale production facilities.

Efficiency gains due to increasing technology, automation, improvements in genetics and legislative changes (expected in coming years as the market continues to strengthen) will also enable costs to decrease.

“By 2030, we estimate a global market potential of up to 500,000 metric tonnes for insect protein as a pet food and animal feed ingredient,” the report says.

Strongest growth is expected in the pet food market, in which insect protein is forecast to reach 150,000 metric tonnes globally.

Ms de Jong said this would be supported by the growing premiumisation and the humanisation trend in the pet food market, with owners increasingly choosing more natural and high protein meals and treats.

“The sustainability benefits of insect protein for environmentally-conscious consumers are also appealing, as are the hypoallergenic features for cats and dogs with sensitivities and allergies,” she said.

And while pet food formulated with insect protein currently sells at a premium, this specialty segment of the market is expected to grow, with discerning pet owners in developed countries willing to pay higher prices for these benefits.

This seems like a good idea, but I can't help asking the question: what could possibly go wrong? Massive escapes of insects bred for animal food....new diseases passed on....pest insects transported around the world...

Actually, it's continuance of prior stupidity, rather than self-questioning.

Sounds really interesting, there is no mention as to what is fed to the insects. I wonder what that might be?

Micro stuff. That we can't see. And just magically appears.

How can this work? Feeding insects will require plant matter which is just another step of inefficiency along the chain from the original source of energy - the sun. We hit the wall of the exponential graph then look for some harebrained way to keep it going up.

You always know when some overseas shadow is trying to interfere and implant ideas in our community. Ideas they've had for a long time and definitely plan to implement whether we like it or not. They're known as "Guest". Seriously check out all of Interests "Guest" articles.

"Interests" interests are bought out and they're taking money for sure.

Have they not heard about the mad cows disease? I guess we have short memory.