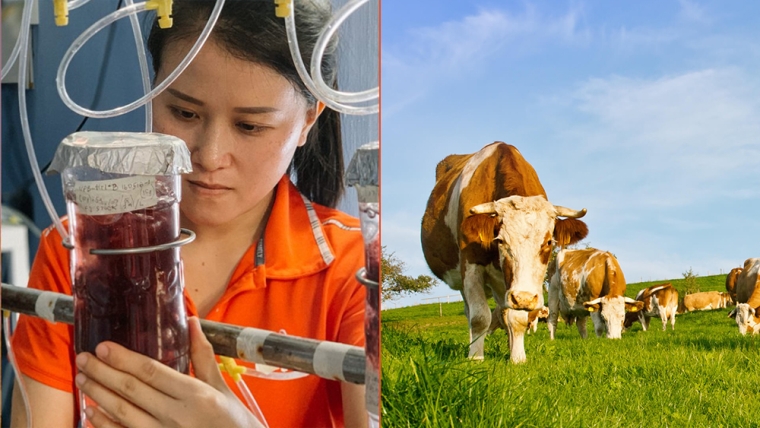 Rabobank’s Food and Agriculture Research unit has just put out a report by its US dairy analyst entitled A Reduced-Methane Future for Dairy with the sub-title Meaningful Progress That’s Economically Sustainable.

Right up front it makes the key point consumers increasingly value products which generate reduced greenhouse gas emissions, but quantifying and monetising the additional costs of production and distribution is challenging. The report notes reducing GHG emissions in a meaningful and economically feasible way will require a transfer of that value to the farmers and other parts of the supply chain which bear those costs.

According to UN Food and Agriculture Organisation the global dairy industry’s emissions have increased by a lesser amount than the increase in milk production as a result of improved emissions per unit of milk produced. Between 2005 and 2015 the sector’s emissions increased by 18%, while milk production lifted by 30%, with better efficiencies being achieved unsurprisingly in the more developed dairy regions. In the United States larger dairy farms and greater manure storage in liquid form have resulted in a disproportionate increase in GHG emissions, which presumably indicates a correspondingly better result from New Zealand’s grass-fed farming regime.

In the United States there are two main means of reducing dairy farming emissions – converting methane from solid or liquid manure pits into biogas and ultimately renewable natural gas (RNG) and mitigating the effects of enteric emissions or belching – but in New Zealand only the second is feasible because of the free range grazing nature of the industry. The first option is further advanced and currently the only one which can provide an economic incentive.

There is a growing trend in the United States towards anaerobic digesters which have become an economic proposition because of the technology that is able to clean the biogas captured by the digester and convert it to RNG. There are now more than 200 anaerobic digesters in the USA catering for dairy farms with more than 500 cows, although according to the US Environmental Protection Agency there are potentially 2,700 farms that could install the technology.

However the economic viability of installing a digester depends on volatile electricity prices and the ability to sell back to the grid, methods of manure collection and whether the digester is managed by a dedicated third party. Without a reliable income stream, dairy farms are unlikely to be willing to install a digester and there is a fear smaller, more marginal farmers will exit the industry.

As methane belched during the digestion process cannot be captured, mitigation of emissions from the rumen is only possible through technological improvements arising from the addition of active ingredients to animal feedstuffs ranging from naturally sourced seaweed, garlic and lemongrass to synthetic additives. Several start-ups are focusing on seaweed-based solutions which have shown potential methane reductions of over 90% and Fonterra is currently partnering with Australian company Sea Forest which is conducting trials with seaweed-based supplements.

Another start-up, Symbrosia, is using aquaculture technology to grow seaweed and research into its effects at Penn State has shown an emissions reduction of 80% in short term studies of lactating cows with no apparent adverse effect on feed intake or milk yield, although further research is needed into the long-term implications for animal health and reproduction. There is also a chance the digestive system may adapt to reduce the effectiveness of the additive. Another problem is scalability to production in commercial quantities for either seaweed-based option, whether seaweed harvested from the wild because of the damage to ecosystems or from aquaculture.

There is promise from synthetic solutions which also have an advantage over natural supplements in their scalability, although trials indicate lower emissions reduction. Dutch company Royal DSM has developed a supplement marketed under the brand name Bovaer which in initial trials around the world has shown a 25% reduction in digestive emissions and is expected to be approved for use in the EU this year. Fonterra recently announced a partnership with DSM to test Bovaer under grass-fed conditions.

The Rabobank report also discusses the opportunities in sustainability marketing to appeal to consumer demand for greater transparency and measurable progress towards reducing the environmental impact of products. In the United States sustainably marketed products represented 50% of dollar growth between 2015 and 2019, while in the dairy category sustainably marketed milk sales grew by 20% as opposed to a decline for milk sales as a whole.

The report highlights the important role dairy cooperatives can play in reducing emissions by encouraging their suppliers to adopt sustainable on-farm practices and rewarding them appropriately. For instance Fonterra is introducing a new payment system, the Cooperative Difference Payment, which will reward members by up to 10 cents a kilo of milk solids, based on the individual farm’s contribution to meeting the cooperative’s on-farm sustainability targets.

Sustainably produced and marketed products will undoubtedly continue to grow, especially in first world countries, and this trend will put pressure on companies to adopt sustainable practices, whether they want to or not. The challenge will be to develop ways of doing this economically and at the same time finding a way to incentivise producers for supplying products which meet the new breed of consumers’ demands.

Seaweed seem very impractical when tree legumes have a similar outcome on methane production. Likewise digesters are great for US freestall barn systems but not very practical in grazing systems.

Yeh. Lets just start ripping out seaweed so the world can enjoy more latte.
Geez, I wonder what could happen to everything dependant on seaweed as food, shelter, nursery etc.

I wish I could find online an interesting article I read many years ago. Postulating that an influence in the decline of Maui dolphin was the harvesting of beach cast seaweed. Which is a habitat for sand hoppers. Which on the tides becomes a food source for mullet. Which lo and behold is a key food item for Maui dolphin.

Interesting that in NZ there is also a massive push for larger storage of liquid manure, in fact effluent storage has been the biggest growth industry in the dairy sector for some years now. Crazy how meeting the storage requirements push emissions in the wrong direction. Typical of government at every level to rush through new rules without doing a full analysis.
I doubt that fonterra actually gets an extra 10c per kgms for all the milk that meets it's new targets, the 10c was just decided at the board level and is pretty arbitrary.
CO2 emissions have grown over 30% during 2005-2015 and continue to grow exponentially, yet in NZ dairy emissions are falling, so the government makes more rules in order to ban dairy farming, just like they banned whale hunting.

All great stuff, but totally impractical for hill country sheep and beef operations, looks like trees it is!

The problem we have in with little old NZ dairy farmers is that we lack the scale & equity to be able to afford to buy depreciating assets like cow barns and Bio-digestors.
Most countries encourage their farmers to "invest" into these "assets" by giving them tax breaks and other financial incentives to change their systems. In hard times these farmers also have subsidised milk prices. This is done as the food their farmers produce is essential to their people to survive.
This is not the case in NZ where 97% of our milk is exported, so it's highly unlikely our dairy industry will ever be able to afford go down this path. Instead we will have to reduce cow numbers and come up with other ways to reduce our Environmental Footprint.