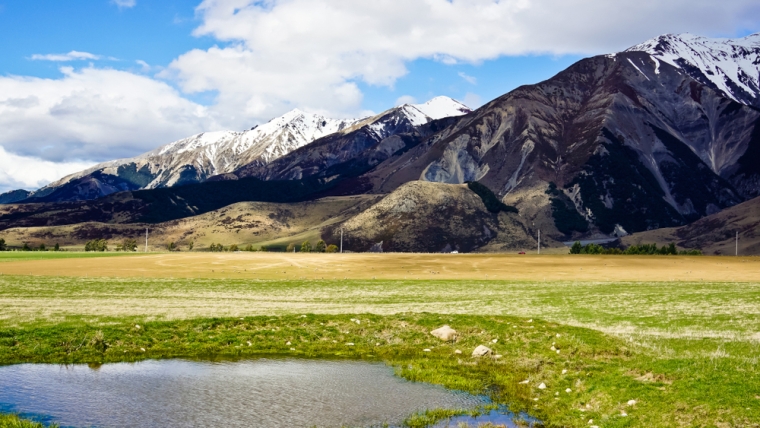 The combined number of South Island hill and high-country farms is modest, comprising less than ten percent of the 9200 commercial sheep and beef farms in New Zealand. However, these farms comprise more than one third of New Zealand’s total sheep and beef grazing area.

These are big farms both by area and livestock numbers, despite much lower stocking rates than all other farm types.  However, the differences between the hill and high-country farms are sufficient that first I will consider them separately before, drawing out some common themes.

Much of this country is summer dry, running from Marlborough, down through Canterbury into North Otago and Central Otago. There is also some wetter country in South Otago and Southland.

The typical South Island hill farm earns over 70 percent of income from sheep and about 20 percent from cattle. This reflects that sheep are more suited than cattle on much of the summer-dry country. The sheep to cattle income ratio has not changed much over the last ten years.

There is a range of other income earning activities including dairy grazing, some limited cropping and deer.

Wool still returns more than the cost of shearing, but not a great deal more. Some of the sheep will be medium-wooled Corriedales and similar, and I know some farmers on this land class who also run Merino wethers. These wethers are castrated rams farmed specifically for their wool.

The finer-wooled breeds will be lifting the average wool price. But still, this year the average wool return net of shearing expenses will be less than $4 per sheep.  This means that on most of these farms the main value of wool is that it protects the sheep in winter.

Farm profit, from which the farmer still has to draw living expenses, averaged more than $250,000 across the three years preceding the current 2020/21 year. Many farmers have been hit by drought in this current year, dragging the expected profit down to $138,000. That is still better than the profitability of most New Zealand sheep and beef farms.

Net worth has increased by 30 percent in the last ten years to $8 million, but there has been no increase in net worth over the last four years. It may even have declined by perhaps 5 percent.

My own assessment is that most of these farmers are used to rolling with the punches of a variable physical and financial environment. They take a long-term perspective.  Average net worth is more than five times greater than liabilities and so these properties are resilient to periodic downturns. Many of the properties have been held for multiple generations, but there are problems looming with equitable succession to the next generation.

Pine trees grow more slowly here than in the North Island but they can still be profitable. In the past it has been for lumber, with distance to nearest port a key factor. Farmers that I interact with are increasingly looking at carbon farming, with this, among other things, being an important part of managing intergenerational succession.

The 200 high-country runs are of another scale again, averaging around 8300 hectares (83.3 square kilometres), carrying 13,300 livestock units, and employing 3.6 labour units.   There is considerable climatic variability between these farms, with some nestled up against the Main Divide and others in low rainfall country.

Farms that are close to the Main Divide sometimes run coarse-wooled breeds, but Merinos tend to be favoured on the lower-rainfall land where they thrive.

About 70 percent of income is generated from sheep and 20 percent from cattle. The proportion from cattle has been drifting up slowly from around 12 percent ten years ago. Winter grazing of dairy stock has also become relevant to some of these farmers. Deer farming and tourism can also play a role.

Wool makes up about 30 percent of sheep income, with the key driver being whether animals are Merino or otherwise. Over the last ten years there has been no clear trend in wool income, whereas sheep-meat sales have almost doubled

One has to be cautious of drawing generalities in relation to the high-country properties. I know a significant number of these properties and none of them fits the so-called average. This reflects the physical diversity within the high country.

One feature that has been occurring has been increased stocking rates per hectare, with these increasing 30 percent in the last ten years.  The key reason for this is that high-country farms have been retiring lots of land to conservation. The remaining land tends to be the more productive land.

Total stock units have increased even more, averaging about 50 percent.  This has probably been partly driven by amalgamations, but may also an artefact of random survey-farm selection.

Land retirement has been going on for more than 50 years. Even in the 1960s, there were schemes for farmers to retire the land above 900 metres altitude, with compensating grants for fencing and developing the lower country.   Agricultural census data indicate that since 1990/91, close to one million hectares of high-country land has been retired from grazing.  If data were available for earlier years, then the area of retired land would be even more.

High-country farms have been particularly profitable in recent years with this linked to their large scale. Profits averaged more than $400,000 across the last three years prior to this current year, with this year’s estimate dropping to $321,000.

Net worth has increased 40 percent in the last ten years to $11.89 million, but as with the South Island hill country, there has been a small decrease in the last four years. Liabilities have approximately doubled over the ten-year period to about $2 million.

With the caveat that every high-country farm is different, recent years have been good for high-country sheep and beef farmers.

South Island hill and high-country farms beat to a different drum than the rest of New Zealand’s sheep and beef farms. The focus remains on sheep rather than beef, with this primarily being a consequence of climate. Wool continues to be a worthwhile contributor, but only for those who have fine-wooled sheep. Carbon forestry is becoming more important on parts of the hill country but is generally not favoured in the high country where wilding pines are a particular issue.

*Keith Woodford was Professor of Farm Management and Agribusiness at Lincoln University for 15 years through to 2015. He is now Principal Consultant at AgriFood Systems Ltd. His previous articles on high-country issues are archived at https://keithwoodford.wordpress.com/category/the-high-country/. You can contact him directly here.

On the flipside, the view from the office desk is spectacular, the gym membership is free for life, and the neighbours don't keep you up all night partying.

Wonderful history in this country. The pioneering days in the Amuri for example are of fascinating reading. It started back then with wool of course until frozen meat export got underway in 1882. Once upon a time there were ten sheep meat export slaughter plants spread from Nelson to Timaru. Now there are four. Not a great signal of growth regret to say.

They went to the bigger is better idea. I.e the chains, a assembly line approach to processing the animal. When I worked at a works in the 1980's , someone calculated that the output per worker was slightly less to the same as having a butcher do the entire process for each sheep . MAF rules and union demands had a bit to do with it .

Aye when the Canterbury works got to a 7th chain in those days it a sight to behold, nothing else than sheer straight through volume processing. Hell on wheels. Pity about the product though. Safe enough but fast hard frozen. Tough as old boots. Had to change and so it did. Lamb product today, especially in chilled form, is superb.

What is the main reason for the lower production? Temperature, soil type , water supply??? Possibly all 3 .
i wonder if it would be easier to fcus production on say the best 1/2 of the land , and be paid to keep the remainder as conservation estate. If not by the government then I'd imagine hunters etc would be happy to chip in in return for access. And it wouldnt be bad to aloow overseas people to lease or have an interest in a piece of high country without owning it .

Why would the government pay when they could just make you pay out of your own pocket to go through an RMA process to develop your own property?

I have no idea the flora and fauna that was once where our garden and house is. But I don't own farm land so I guess we should be sweet.

What is the main reason for the lower production? Temperature, soil type , water supply??? Possibly all 3 .
i wonder if it would be easier to fcus production on say the best 1/2 of the land , and be paid to keep the remainder as conservation estate. If not by the government then I'd imagine hunters etc would be happy to chip in in return for access. And it wouldnt be bad to aloow overseas people to lease or have an interest in a piece of high country without owning it .

Lower production? First up, the market. What was a dead cert protein feeder to the hoi polloi keeping the industrial wheels of the UK man powered. Well it kind of exited stage left.