With a record high dairy payout in sight, Guy Trafford checks what it will take to lock it in. He also shows what artisan cheese makers are up against, both from EU subsidies and local bureaucracy

Rural News / analysis
With a record high dairy payout in sight, Guy Trafford checks what it will take to lock it in. He also shows what artisan cheese makers are up against, both from EU subsidies and local bureaucracy 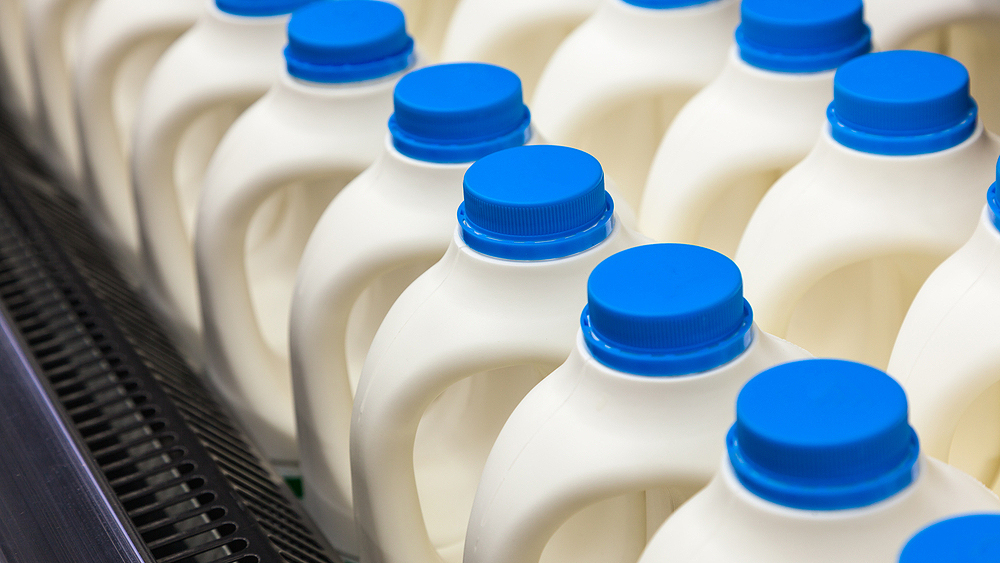 Much has been made of the forecast milk price from Fonterra to its suppliers. It is being compared to the previous record high of the 2013/14 season. Currently for the 2021/22 season the mid-point of the range is $8.40 per kg of MS, a considerable jump from the previous season ($7.54).

While the current season still has plenty of months to run, hence the broad range, at $8.40 it would equal the 2013/14 season.

This drove me to have a look to see how that year’s GDT auctions stacked up against the current seasons. While not all milk is sold via the auction process it does provide a useful comparison and WMP is where the predominant dairy returns come from.

The graph below plots the sales from July 1st of both seasons to the end of June for 2014 and to November 13th for this season. (Prices are adjusted by the then value of the NZ dollar for the two-week auction period). 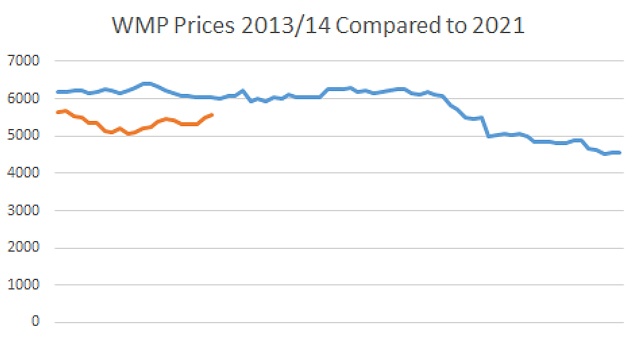 Looking back at a Fonterra press release from December 13th 2013 then Chairman John Wilson made the point that the (then forecast of $8.30)was 70 cents below the “theoretical Farmgate Milk Price of $9.00 per kg MS calculated in accordance with the Milk Price Manual”. The price also came with a warning of the current volatility and hence the dividend forecast was (only) set at 10 cents per share. The current forecast is 25 – 40 cents per share.

The same problem identified now of limited capacity for powder production was also identified back then with a third drier for the Pahiatua plant on the job list. The comparison does show that if 2013/14 is a guide to what it takes to achieve a mid $8.00 or thereabouts farmgate return, then this season needs to show some improvement yet. This does seem to be happening with the ‘worm’ turning skywards in recent auctions.

It is perhaps of interest that the 2013/14 season was able to improve on its earlier projection even though the auction prices took a fall off in the later part of the season. Watching how the worms track, while not in the league of a one-day cricket game, may still be entertaining.

While scanning around for the above information I came across an advertisement which those who found Keith’s composting barn story of interest might enjoy. I’m not trying to push the barn company but it does put some images to the story.

As a small (sheep) cheese producer I take an interest in what turns up in the supermarkets. Recently there appears to have been an increase in imported European cheeses going at incredibly cheap prices. The majority seems to be coming from Denmark although other nations are also represented.

These cheeses look to be displacing locally produced ‘artisan’ cheeses.

Travelling halfway around the world at prices locals cannot compete against and with shelf lives that makes you scratch your head (apparently a lot comes in frozen).

When you read that the EU is budgeting to spend US$474 bln in the next 6 years in the agriculture sector, it is no wonder they can afford to send their cheeses down here. This doesn’t include any offset costs for emissions which over this period New Zealand farmers will begin to incur.

As a point of comparison to our Northern competitors we just had the first of our annual audits, this was for the farm dairy, the processing audit is still a couple of weeks away. For any producer in New Zealand whether they have 50 cows (or sheep, goats, buffalo or deer etc) or 5,000, they face the same process especially if they are adding value to their product as well.  There may will be similar processes that European farmers have to satisfy but I suspect they will be at less stringent levels. Our list of things that need to be checked and authenticated is below, each by different tradesman/firms.

If processing, then these are also added:

The moral here is that scale certainly has its benefits. And if you think it’s a bright idea to start up a hobby farm because you have a passion for producing food, think again. (I have heard hobbies described as being businesses that don’t make money).

In the last 12 months I know of three artisan cheese makers that have closed up shop. Not only are the above requirements expensive but also time consuming and stressful. If you think local artisan cheeses are expensive when compared to imported cheeses this is why, and without the billions of euros in subsidies. No tariffs are charged on imported cheeses. It will be interesting to see what the Free Trade Agreement (if it eventuates) does to this. I don’t foresee a lot of change as there is an open door policy to New Zealand despite the reverse not being even close.

The pork industry has a similar issue with cheap subsidised pork coming in. Farmed to lesser standards and in their case with minor processing sold as New Zealand produce.

On a food bent, Australia has just announced $33 mln of grants to assist new and existing food and beverage enterprises. Perhaps I should shift countries; but Australia?

There may will be similar processes that European farmers have to satisfy but I suspect they will be at less stringent levels.

Really?! Less stringent in the EU? Tell that to the brexiteers!

Most cheeses here, even a lot of the artisan ones are bland compared to european ones ("tasty" mainland cheddar here would be a mild cheddar in the UK. The rest of the other big brand and supermarket ones are like tastless rubber). Not sure why that would be. Different cultures? (Biological cultures i mean)

Why the big bold headlines?

What other industry (other than agriculture) would be crowing about taking seven years to get back to where the market price was?

A bit off topic , but there's alot of carbon produced to  build those steel barns, vs the wood pole sheds, or laminated beams on this scale. But wood gets no credits for the carbon it locks up for 50 or more years.

Wood pole sheds use coloursteel for all of the cladding, doors and roof. Not much wood in a wood pole shed

What I've been hearing is that dairy farm input costs have soared. I suspect that relative to 2013/14 an $8.40+ payout won't deliver a record surplus net farm income.

One big difference was the interest rates. If that  big payout hadnt came along , alot of farmers would have struggled to continue.

A misleading graph, the GDT Index is at a record high and it only makes sense to value it in NZD because that is what the milk price is paid in.  WMP is only part of the picture.