As major flood events become more frequent, the challenge is upon us on how to respond, and a lot will depend on what we are defending. Insurance signals will play a large part in some hard decisions that need to be made

Rural News / analysis
As major flood events become more frequent, the challenge is upon us on how to respond, and a lot will depend on what we are defending. Insurance signals will play a large part in some hard decisions that need to be made 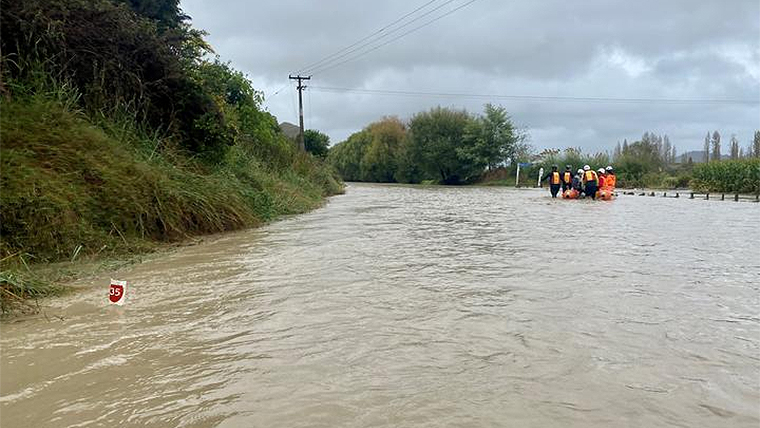 Listening to Climate Change Commissioner Judy Lawrence on RNZ’s Checkpoint (March 28, 2022) speaking about the damage that has just occurred on the East Coast brought home to me just how climate’s impact upon society has changed.

The headlines going back used to be about sea level rise and the impact that was going to have upon housing built too close to the sea. This risk obviously still exists but more urgent impacts are now being felt with the water coming, at least initially, from the skies above - resulting in heavy rainfall impacting upon rivers’ ability to contain the water.

In the last 12 months extreme events have occurred on the West Coast, Marlborough, East Coast, Canterbury and Auckland regions some more than once and there are probably more I should have mentioned. There are plenty of map examples showing where coastlines are at risk of being swamped from climate change but I cannot recall any real detail of the risk of river flooding at a national level.

The Australian east coast flooding examples have shown just how dramatic the potential is on towns and cities plus loss of life.

The sea rise no doubt will occur but protection from rivers is looking like it is going to be far more pressing and unpredictable.

No doubt some will argue that it was a mistake to ‘contain’ and civilise rivers’ but we don’t have to look far to see examples where whole towns and cities would be at risk if catchment control and modification didn’t take place. Christchurch is a classic example with the Waimakariri river’s proximity and it’s history of being able to flow through where a large part of Christchurch now sits.

For some time, the 1957 flood was considered to be the ‘worst’ in recorded history although there is evidence that at least two other events were greater in the previous 300 years.

The stop bank improvements recently completed on the Waimakariri River (2019) are meant to be able to cope with a 1,000 year flood based upon modelling. However, there are plenty of rivers which are not able to be made safer especially at what now seems a reasonably modest budget of $40 million which the Waimakariri River extended boundaries cost. Also, as the payback was to protect up to 500,000 people and over $8 billion of infrastructure, most rivers would not justify the same inputs.

Commissioner Judy Lawrence raised the point that it is probably time for some communities to now start looking at tactical retreats from building in at risk areas.

These areas at the moment include seaside areas and flood plains but it can be imagined as time progresses to include steeper hillsides prone to erosion.

The question then becomes who is going to pay for this retreat?

Insurance companies, if they haven’t already, will ratchet up the cost of insurance and increasingly decline to insure. Judy Lawrence believes the cost should be borne by everyone, so central government stumps up and the taxpayer pays. This may well be the most pragmatic solution however it is highly unlikely to be popular with those taxpayers who resisted the urge to buy or build with seaside views or access to waterways. Sympathy can be extracted for those who own multi-generational houses which were built prior to more widespread knowledge on climate change being circulated.

Latterly though there is little excuse.

In less desirable areas some of these homes would have been cheaper while others likely to be more expensive with peoples’ desires to view the ocean and rivers. How much push back  comes from the tax paying population will likely depend upon how the mitigation and retreats are ‘sold’. Information and accompanying consultation need to start to flow now. At this stage this should probably come from local government as they will have far better access to information on where the risks lie.

Then government can come along behind withits chequebook to help mop up.

Involving local governments in the beginning should/may avoid another fiasco as has occurred with the 3 Waters Reforms. Given the high costs likely to be involved councils should welcome the government involvement however, as with all policy decisions the devil will lie in the detail.

As a retired farmer (mostly) it feels out of character discussing flooding as when it comes to climate change the increased risk of drought always loomed large and its insidious nature always put a knot in the stomach. However, drought while it erodes the soul when it is occurring does have the benefit of a good rainfall can literally wash away much of the stresses. Flood unfortunately can wreak damage that may take years to rectify.

I’ve always believed that our abundance of fresh water in New Zealand is a major competitive advantage, lately that ‘abundance’ can show that it comes with a cost.

In an earlier interview Judy Lawrence speaking to Kathrine Ryan (9 to noon) expanded on the issues councils have with the current planning issues. The upcoming review of the RMA may help align how climate change issues are dealt with.

'The question then becomes who is going to pay for this retreat?'

The climate change denialism of the last 40 years has got us to this point, and it is not uncommon to still hear it from many of the retired denizens of our coastal and 'riverine' communities (favorite refrain - 'climate has always changed, and anyway it's not going to matter in my lifetime, blah, blah).

Well now it's here and guess what you are still here. Buggered if the rest of us should be picking up the bill for them (and incredulous that the Commissioner thinks that's the way to go).

Indeed. The shortfall in insurance coverage could be solved with additional tax on FF usage. Perhaps those with developed property up till 1990 could be covered up to say $500000 and a sliding scale to zero coverage at 2020, which is around the date even the greatest moron must have got the news we are now in an extinction event.

I've got a lot of time for Judy Lawrence, but she's wrong on the socialisation, at least in part. Risk based insurance is the key, even if it has a component of government backing. Insurance companies are starting to shift to this and we're hearing whinging from the people whose insurance has been subsidised by less hazardous property owners.

The thing is NZ insurance companies get their reinsurance from overseas. NZ is just a blip so our massive natural hazards  haven't fazed them. Now with climate change they may be a bit pickier, and insurance costs should increase for a lot of people and decrease for others.

Restoration of wetlands (which would require use of some productive land), would kill 2 birds with one stone . Add more off river storage for pumped hydro and irrigaton purposes would also enable benefit form necessary works. Trying to keep ahead of rivers with increased stopbanks to me is the last resort.

Stop banks are bad - when they fail, it's a catastrophe (Edgecumbe anyone?). The better option is land use change and an insurance and housing market where prices reflect risk. A lot of unrisked pricing out there.

They have their place, but the problem is they are seen as the be all and end all. Around here it has led to the removal of ponding areas , and installation of diesel pumps to ensure the protected area can be pumped out. People tend to forget the river also drains the area they are stopbanked through , so where does that water go ?. Has to be pumped over the top, and pumps need to be sized to do so. that sizing will need to increase as we are seeing more heavy rain per hour events.

Given climate change and earthquakes etc, I would agree with Judy Lawrence - we need to call time on the insurance industry and replace it with a centrally funded state scheme.

Insurance companies take a meaningless short-term view of risk, which leads to meaningless premiums that do not send the right signals at all. A state scheme could incrementally adjust insurance premiums so they better reflect long-term risk. I would incorporate this premium into an overall land tax.

A confounding factor in all of this is timescales.  Vegetation cover changes, like burning the East Coast forests of the SI 5 centuries ago, take decades to centuries for the effects to stabilize.  Drainage changes, hard surfaces, housing expansion, and the like take years to decades to affect downstream environments.  NZ's multitude of short, steep rivers pose issues of their own, with catchment rainfall taking minutes to hours to arrive.

And then there are Earthquakes and Eruptions...Let's move Wellywood and New Plymouth to safety.....

Yes , large warehouses/ office buildings , not just the roof area , but also the sides getting more rain on wind side. Huge carparks that are tarsealed with no permability to the earth underneath .

Christchurch City Council voted for a "climate emergency" when it was fashionable to do so. Then it took $450m of covid money to build a sports stadium. Arguably that money would have been better spent on building something  like a water storage dam a la  the planned CPW reservoir in the  Malvern hills.

When we bought in 2020 we were very careful not to buy anything in a 1 in 100 year flood zone. Fortunately these were readily available in the area we wanted to buy. Buyer beware. Seller get out.

Analysis of Trends in Disaster Risk.

"Summarizing these empirical findings, we infer that the sustained UN effort at raising attention towards natural

disasters has been fruitful since both types of risk appear to have fallen over the last 4 decades.

We then show more interestingly that over the long run, the risk of dying in a disaster for a

risk followed by falling risk since the 1990s. On the contrary, the

Over the long run, financial losses have consumed about 2‰ of the

countries suffer about thrice more destruction for a similar natural hazard. It

for the human focus of the Sendai perspective; it should therefore be replaced by the property risk."