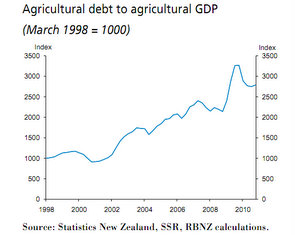 Agricultural debt to agricultural GDP has tripled since 2002 in this indexed chart provided by the RBNZ.

The Reserve Bank has announced it will increase requirements for banks to hold capital to back farm loans back to levels seen in the early 2000s before rules were relaxed and dairy farm lending surged.

Impaired and past-due farm loans are now the highest of any sector and have more than quadrupled to over 4% of loans in the last three years.

The introduction of Basel II rules in the years leading up to 2008 saw banks use to internal modeling (IM) of their capital requirements, which some saw as softer and allowing banks to hold less capital.

“At the time they were accredited by the Reserve Bank advised IM banks that the models they applied to New Zealand farm exposures were inadequate and would be further reviewed post accreditation (2008),” the Reserve Bank said in its six monthly Financial Stability Report.

“In cases where models were insufficiently conservative, it was necessary to require banks to hold additional capital pending this further work,” the Reserve Bank said.

“The Reserve Bank has recently consulted on new farm lending capital requirements. The new requirements will better take into account the possibility of large falls in farm land prices and the homogeneity of farm lending exposures. “

“The new requirements will also reflect the Reserve Bank’s view that contractual maturity is not a significant driver of corporate loan systemic risk,” it said.

The new rules will take effect from June 30 this year.

Initial plans to toughen the rules were delayed last year after farmers and banks warned they could increase farm lending costs by as much as 30-50 basis points.

ANZ NZ David Hisco had also called for the rules to be phased in.

However, the Reserve Bank said rising commodity prices over the last year give farmers more leeway to repay debt and to service their debts.