Keith Woodford looks ahead to see how dairy farmers will adjust to the regulatory, environmental and economic pressures in their industry and still be able to prosper

Rural News
Keith Woodford looks ahead to see how dairy farmers will adjust to the regulatory, environmental and economic pressures in their industry and still be able to prosper 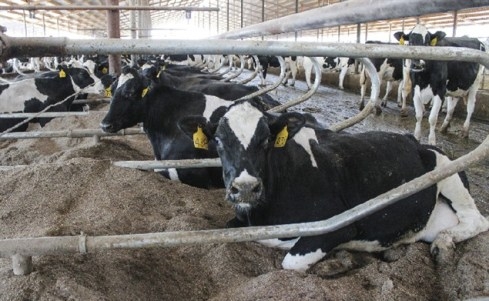 Right now, everyone in the dairy industry is figuring out how to get through the next 12 months without too much pain. But eventually events will turn and we will be able to think more strategically about where the industry is going.

Down on the farm, the big long term issue will be how to remain profitable while living in the new world of nutrient emission limits.

There are two ways to go. One is to farm within an all-grass system, but pull back the stocking rate and other inputs such as nitrogen fertiliser and supplementary feed. Some of the environmentally-focused people are arguing that this is the way to go, and within industry organisation DairyNZ there is a strongly held viewpoint that all-grass is where our competitive advantage lies.

A key limitation of the all-grass system is that even with considerably reduced stocking rates there will be considerable nitrogen leaching. This is an inevitable outcome when a cow drops nitrogen-laden urine at high concentrations. In spring and summer, the urine spots do not cause great problems. However, with autumn-dropped urine there is insufficient time for the nitrogen to be absorbed by growing pasture before being leached away in winter.

Particularly in the South island, the so-called all-grass system actually relies on considerable quantities of forage crops – traditionally swedes and turnips, more recently kale, and now increasingly fodder beet. When fed in-paddock, the nitrogen leaching can be extremely high.  Much of this occurs with dry stock on runoff blocks and therefore does not come into nutrient calculations for what farmers call the milking platform. However, when considering the total system, and doing so on a catchment basis, then leaching from these wintering blocks is a big problem.

The only way to solve these problems is to get the dairy cows off-paddock for the second half of autumn and throughout winter. Depending on the region, this is somewhere between 90 and 150 days. But going down that path leads to other controversies. By getting cows off-paddock there is no doubt that we can much better manage the nutrient situation.  However, we also have to manage animal welfare, odour and costs.

Animal welfare is particularly important but there are solutions. Cows like being in a barn as long as they have freedom to move around, and somewhere soft to lie down. That means either rubber mats, straw, wood chips or sand. All cows need to lie down for at least 8 hours per day, and the herd average should be closer to 11 hours.

The internationally-proven free-stall design satisfies these welfare criteria. However, this is not achieved with some other designs which we have been seeing in New Zealand. The free-stall design also keep cows relatively clean and is therefore suitable for lactating as well as dry cows.

Terminology can be important and talk of cubicle-farming quickly raises public concern. The free-stall system does have cubicles, but a much better term would be ‘cow beds’. Within the free-stall system, the cows are totally free to choose their own bed and to come and go as they like. The side rails ensure that the cows lie in the correct direction so that when they do stand, some 90% of the dung and urine falls out into the central laneway, from where it is removed by mechanical scrapers.  People in the industry should never refer to ‘cubicles’ because of the false connotations they have for the uninformed.

The odour associated with these systems is not so much from the barns themselves, which have little smell when properly managed, but occurs when the nutrients are spread back on the paddocks. Essentially, the rest of the world seems to have solved these problems and it would be surprising if we cannot develop satisfactory solutions for New Zealand.

Accordingly, the one big issue to be resolved with barn-systems is the economics. Can we be internationally competitive in the dairy industry if we go down that path?

If we are going to make barn systems work in New Zealand, then it will be based on unique New Zealand solutions.  Some farmers are already choosing fully-housed systems and are convinced they can make these pay.

The secret to success with fully-housed cows will be management of feed costs relative to the increased production from these systems. If we simply mimic American systems with their high grain content, then we are likely to be in trouble.  Part of our New Zealand strength lies with conserved forage crops such as fodder beet, maize and lucerne which can outperform pasture production.

Other New Zealand solutions are likely to be hybrid systems where the cows still graze pasture in spring, summer and early autumn. I expect that this is the way that most New Zealand farms will go eventually. However, we still have lots to learn about maximising profitability within these systems.

Making these changes requires new ways of thinking and throwing out the old rules of thumb. In particular, with hybrid systems the old rules about pasture management have to change so as to still maintain high pasture utilisation.

The cost of a top-quality free-stall system, including effluent ponds and associated infrastructure, is about $4000 per cow. On a per cow basis, that is about 20% of the overall capital cost for a dairy system. However, cows farmed within barn systems typically produce more milk and so the overall capital cost per kg milksolids may not increase.  It may even go down.  Accordingly, the key issue is controlling operating costs.

DairyNZ has been arguing that the merits or otherwise of barn investments need to be evaluated on a net present value basis (NPV). That is all very well in theory, but the problem is that most farmers, rural professionals, rural bankers and even DairyNZ staff do not themselves have a good understanding of these calculations.

For more than 30 years, I have been teaching investment appraisal using NPV and related techniques. On occasions I have lain awake at night and pondered whether I might be doing harm as well as good by teaching these techniques. If the techniques are not fully understood, and inappropriate assumptions are used, then we end up with wrong answers which lead to bad decisions.

Accordingly, there is a good logic why most accountants and bankers stick to analysing the cash flow implications supplemented at times by payback periods. In the real world, cash is king and cash is something we can all understand.

Most farmers who invest in off-paddock wintering will use borrowed funds. So the first question to ask is where the interest and loan repayments are going to come from. And the second question is what will happen if product prices crash in the first two or three years after construction. Is there a ‘get through’ survival strategy in place?

Interest on borrowed funds is the one unavoidable cash-cost. For a free-stall barn, at 6 percent interest, this will be about $240 per cow.

The quickest way to start getting a return on barn facilities is to milk late-calving cows through into early winter. The second way is to move to a split-calving system. Both of these strategies increase the days in milk relative to the dry period.  This increases overall efficiency of the milk to feed ratio. Better feed utilisation in the barn compared to trudging around muddy paddocks further improves this ratio.

Fonterra now pays an additional 52c per kg milksolids for milk in the eight shoulder and winter months of January to August than it pays for milk produced in September to December.  The free-stall barn system allows more of this off-peak milk to be produced and thereby raises the overall price.

All of these changes require new ways of thinking. Simply building a barn without also changing the overall farm management is not going to work.

Research and development organisations within New Zealand have been slow to get involved in off-paddock systems. Rather, it is largely farmers who, through trial and error, are pushing back the boundaries of knowledge as to what can be done. Although DairyNZ is producing some good technical publications on barn design, it is not doing enough to identify the key farm management success factors.

Current estimates are that there are about 650 New Zealand dairy farmers with off-paddock wintering systems. These include simple non-roofed stand-off pads (which may struggle to meet environmental standards), slatted-floor tunnel-roofed structures (which may struggle with future animal-welfare standards if used for prolonged periods of the year) and free-stall barns (which are the most expensive). There is a lot to learn from those who are going down each of these paths.

I am predicting that in 20 years’ time we will look back to the current debate with some wry amusement. We will talk about how the journey to the new dairy systems that meet environmental, animal welfare and economic criteria was more than a little tortured, but how eventually we got there. Exactly how tortuous the journey is going to be only time will tell.

The ones investing in cow barns are the corporates and old timers who have had time to pay down all their other borrowing. It's not feasible on a start-up situation

I think it is very short sighed to offer just the 2 options. Technology plays a big roll and maybe the path we take is not even thought of yet. We need out of the square thinkers that can realise the whole picture and put the puzzle together.
Things we have to do is.
Cut infrastructure cost and over capitalisation.
Reduce labour cost and input.
reduce resource and energy costs
Increase/ maintain animal welfare
Increase soil diversity and health while decreasing nutrient leaching
Improve profitability on a ever shrinking area of land.
Making and Marketing a product the consumer wants to buy. This is the most important as it makes the others irrelevant.