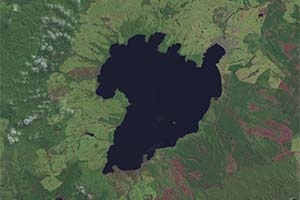 Lake Taupō has the world’s only nitrogen trading market where farmers operate under a cap.

Environment Minister, Dr Nick Smith announced last week that the joint Government and council initiative to reduce nitrogen leaching into Lake Taupō by 20 per cent, or 170 tonnes per year, has achieved its goal three years ahead of schedule.

The Lake Taupō Nitrogen Trading Market that achieved this, builds on work by Motu Economic and Public Policy Research, a not-for-profit, non-partisan research institute. Motu completed this work alongside Landcare Research and the Morgan Foundation.

“Until the Taupō scheme, water quality trading markets have been focused on point sources of pollution, such as sewage plants or pulp mills; agricultural has only provided offsets,” said Suzi Kerr, Motu Senior Fellow.

Researchers at Motu and Landcare Research all found that is feasible to include agricultural emissions within a cap and trade water quality market and that the Taupō market is functioning. They also found that, once property rights are clearly established, the costs of trading are low.

Falling water quality as a result of nitrogen leaching into the soil and the water table is a pressing issue in New Zealand.

A quarter of all water monitoring sites showed an increase in their nitrogen concentrations over the ten years to 2013. This leaching predominantly comes from dairy cows, but sheep and cattle also contribute to the problem.

A major issue for water quality is the difficulty in regulating non-point sources as their diffuse nature means the pollution must be estimated.

Leaching in Taupō is determined using a specially constructed model called OVERSEERTM (owned by Ministry for Primary Industries, the Fertiliser Association of New Zealand, and AgResearch Limited). Each landowner in the Taupō catchment now requires a nitrogen discharge allowance to farm based on the estimated leaching from their farm, but is allowed to trade these allowances around the catchment. This rewards famers who reduce their nitrogen leaching and allows those who want to intensify production to do within the law.

The theory in Taupō was that a market-based trading scheme would achieve the environmental goal of reducing nitrogen losses to 20 percent below 2008 levels at a lower cost and with greater flexibility than farm by farm regulation.

“The community’s goal was to maintain a healthy lake, and a regulatory cap was the most likely way to achieve that goal in Taupō. What the trading market has done is allowed this cap to be imposed in a more efficient and flexible manner, which is a net benefit for farmers in the catchment,” said Suzi Kerr.

Motu researchers, Suzi Kerr, Madeline Duhon and Hugh McDonald investigated the initial impacts and restrictions faced by the 180 landowners in the Lake Taupō catchment who qualify to participate in the market. They examined how the ability to trade affected landowner flexibility and outcomes. The outcome of their work can be found at http://www.motu.org.nz/our-work/environment-and-resources/nutrient-trading-and-water-quality/nitrogen-trading-in-lake-taupo-an-analysis-and-evaluation-of-an-innovative-water-management-policy/.

Suzi Kerr then worked with Suzie Greenhalgh from Landcare and Geoff Simmons from the Morgan Foundation to look into whether the Taupō Nitrogen Market was worth doing. The outcome of this work is at http://www.motu.org.nz/our-work/environment-and-resources/nutrient-trading-and-water-quality/the-taupo-nitrogen-market-the-worlds-only-diffuse-source-trading-programme/.

The Lake Taupō Protection Trust executed 23 trades prior to June 2014. There have also been 12 other trades between farmers. Even by June 2012, 30 out of 180 farmers had engaged in at least one trade and 17 percent of the cap had been traded.

In addition, various farmers have increased their profitability by taking advantage of marketing and farm innovation resulting from the scheme. An example worth noting is Taupō Beef.

As Regional Councils respond to the National Policy Statement for Freshwater Management and try to set and then meet limits acceptable to their local communities, more catchments will find themselves looking for policy solutions such as Lake Taupō’s cap and trade market.

Motu Economic and Public Policy Research is an independent economic research institute based in Wellington.

One problem with this scheme was the decision to "grandparent" nitrate emissions based upon historic levels. This favours early polluters and is probably encouraging rapid intensification elsewhere knowing that any change in rules will favour those who got in first.

Although Overseer is being continuously updated, the Taupo scheme uses a set version of the tool. The same version used for benchmarking will be used to check compliance.

The inability to recognise new mitigation actions/technology will stifle farm management innovation - why do it when it is not going to be recognised - so good to see there is a review in 2018.

I have heard Mike Barton say that the $81m allocated by govt etc, will never happen again elsewhere. The authors don't appear to have considered how different the scheme would be without that funding. Also Barton has said that it is not an easily transferable project because not all catchments have the ability to be planted up in pine forests.

Lysimeters have been installed in some research areas (Southland Demonstration Farm being one) to measure actual leach rates. Given the up to 100year lag in some water nutrients reaching the lake, would it not have made sense to install these on some key farms in the catchment to actually measure the leaching?