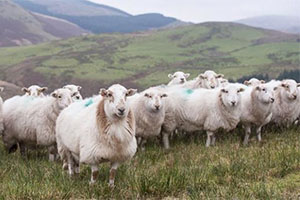 A new report by agricultural consultancy Agra Europe entitled Preparing for Brexit suggests leaving the EU, to be determined by a referendum in 2017, could destroy the British farming sector.

The authors have based their forecast on the Coalition government’s 2013 Fresh Start Policy document which theorised that British agriculture could imitate New Zealand and Australia’s success in surviving, even flourishing, in a post-subsidy world.

Not surprisingly there is plenty of scepticism about the realistic prospect of either of these scenarios eventuating. If British voters chose the Brexit option, it is most unlikely any government would eliminate all subsidies, while a cursory glance at the proportion of farm income from EU Common Agricultural Policy payments shows how laughable it would be to expect them to become suddenly profitable.

The report concludes the Government would cut environmental subsidies to wealthy lowland farms and concentrate them on hill farms in Wales and the Highlands of Scotland; at the same time tariffs would be cut drastically opening the UK to imports from (heaven forbid) the Antipodes, North and South America.

“The consequences would likely be that land prices would fall, banks would foreclose on loans based on high land prices, and bankruptcies would be widespread. The numbers of small and medium-sized family farms would further decline and agriculture would become even more industrialised. Only large units with low marginal costs would be able to survive on a fluctuating and uncertain world market. UK food self-sufficiency would fall,” the report says.

An article by the Telegraph’s Ambrose Evans Pritchard states that 60% of UK farmers’ income comes from a combination of EU and environmental subsidies. An alternative figure suggests 35-50% of gross farm income is derived from EU subsidies. However there is a wide divergence between the percentages applying to different regions – three times as much to Wales and Scotland and four times as much to Northern Ireland. Equally there is a significant discrepancy according to farming type with cereal and livestock grazing being the least profitable, although reports on dairy farm profitability do not make pleasant reading.

Of course the UK contributes UK£12.3 bln into the EU budget compared with CAP receipts of less than UK£3 bln, so in theory there would be enough money available to continue to support UK farmers.

Another critical factor is the 60% of British food exports which currently go to the EU. These exports would revert to tariff rates which range from 11-48%, unless the UK is able to negotiate a continuation of the present duty free status. 17 of the world’s top 100 food and beverage companies have their headquarters in the UK and some of these may consider relocating, for tax reasons if nothing else.

None of these Doomsday predictions may come to pass. The UK may not even vote to leave the EU and, if it does, the agricultural policy may be much more cautious than the 2013 coalition document suggested. But the possible scenarios indicate how much is at stake. What is strange is the fact the National Farmers Union, similar to Federated Farmers but with aspects of Beef + Lamb NZ and other representative bodies, has not yet made up its mind, until it knows Prime Minister David Cameron’s negotiating position.

As Evans Pritchard says “If the 55,000 members of the NFU cannot yet reach an informed conclusion on what is in their own vital self-interest, the rest of us can scarcely do so.” It is hard to imagine New Zealand’s farming bodies taking such a wait and see approach on a matter so important to their future.

Allan Barber is a commentator on agribusiness, especially the meat industry, and lives in the Matakana Wine Country. He is chairman of the Warkworth A&P Show Committee. You can contact him by email at allan@barberstrategic.co.nz or read his blog here ». This article first appeared in Farmers Weekly, and is here with permission.