Rabobank suggests that it will only be the dairy sector facing a very difficult year in 2016, with variable prospects for other farmers

Rabobank suggests that it will only be the dairy sector facing a very difficult year in 2016, with variable prospects for other farmers
11th Feb 16, 9:28am
by Guest

New Zealand’s agricultural sector is looking at mixed prospects in 2016, with dairy facing another difficult year but most other sectors expected to perform well, according to a new industry report.

In its Agribusiness Outlook 2016, global agricultural specialist Rabobank says dairy prices continue to be weighed down by strong supply growth, particularly out of Europe after the recent removal of quotas.

“Dairy prices are expected to begin to pick up in the latter half of 2016, but the timing of the recovery will be driven by how quickly the brakes can be applied to global milk production,” she said. “With cash flows in the dairy sector expected to remain tight throughout 2016, thankfully there is little change foreseen in operating costs such as fuel, fertiliser and interest rates, although supplementary feed costs will hinge on pasture growth."

“A weak and falling NZ currency will provide only partial compensation for low international dairy prices for local farmers, particularly given hedging already in place.”

While dairy faces another tough year, Rabobank foresees a generally strong year ahead for most other agricultural sectors.

“While beef prices have lost some ground in recent months, they remain well above multiyear average levels, and are expected to receive support from a generally tight global market,” he said “Wool producers will face headwinds from cheap synthetic fibres, but see support from declining production in New Zealand and Australia.”

Mr Hunt said the wine industry was looking set for a better year in 2016, with improved climatic conditions likely to underpin an increase in production, average prices holding up well and good momentum for New Zealand product sales in the US and Chinese market.

“The trend in consumer preferences is positive for New Zealand wine, as we see a shift towards higher-priced wine and lighter styles,” he said.

“Challenging seasonal conditions have driven a surge in slaughter rates early in the season, with prices likely to remain under pressure given generally sluggish demand,” he said.

The Rabobank Agribusiness Outlook found currency, financial volatility, the Chinese economy, climate and oil prices were all swing factors which had the potential to impact the prospects for New Zealand agriculture in 2016. 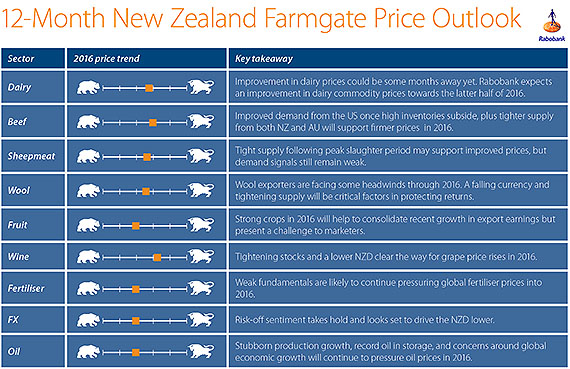 Don't expect to see any farmers going to the wall. NZ govts always bail out farmers, even when they deserve to fall. It is especially hard to imagine the English family not bailing out their farmer mates with tax dosh and more overseas borrowing. The rest of us would go to the wall, but not farmers. Not ever.

It seems you are very misinformed Lucy Basket. Farmers do go to the wall and don't get bailed out.

Sure looks that way, though I wonder in say a severe and wide scale oh so un-expected severe drought (say) if the Govn wouldn't indeed "help".

I think you are wrong here, there have been enough farm failures to show Govn stays clear. On top of that lets say National did start bailing their supporters out, how long would they remain electable? not long me thinks.

Wasn't National's extension of the SCF deposit guarantee scheme considered moral hazard given the declared state of the company at the time?.

Greatly yes. I suppose the problem clearly is which do pollies consider worse, do nothing and watch a grand scale collapse / recession and lose votes hand over fist, or pass the buck down the road so the current voter feels little pain but avoid a recession and stay in power.

Now I can live with the latter if those same pollies put in place regulation/law ensuring that we cannot have a repeat of this fiasco, it seems however they have not done so.

PS actually worse than moral hazard as it was a certian pay out.

what a load of rubbish LB.