Keith Woodford points to the outsized importance of governance failure in the crisis hitting Australia's largest dairy cooperative, compares it to our own rural industry governance issues

Keith Woodford points to the outsized importance of governance failure in the crisis hitting Australia's largest dairy cooperative, compares it to our own rural industry governance issues 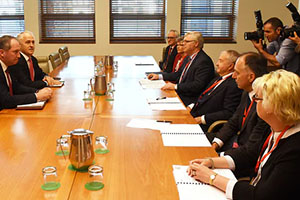 The Murray Goulburn Cooperative board faces the wrath of politicians

Our Australian dairy cousins are currently going through difficult times, particularly for those who supply Murray Goulburn, and to a lesser extent Fonterra.  There are lessons to be learned, although there may be alternative perspectives as to the specifics thereof.

Once the spring-calving cows come on-stream, the figures may look less dramatic, but both Murray Goulburn and Fonterra have clearly lost substantial market share.

In Australia, there are about ten major processors and a myriad of smaller processors. There is one major co-operative, which is Murray Goulburn, with about 37 percent market share prior to the current shambles. The other big processors are all investor-owned. This includes Fonterra, which although a co-operative in New Zealand, acts as an investor-owned firm in Australia, with the investors being its New Zealand based dairy farmer members.  Fonterra has an Australian milk production share of about 15 percent.

Until April of this year, Australian farmers were largely protected from the global dairy downturn. In part this was because more than 50 percent of Australian production is consumed within Australia as branded product. In part it was because Murray Goulburn was telling its farmers that, despite its dependence on exports, it could afford to pay them $AUD5.60 up front, with the prospect of a final payout reaching at least $6.

This $AUD5.60 figure then flowed through to most of Fonterra’s Australian farmers. This was because these farmers, part of the Bonlac Supply Co-operative, had a contract with Fonterra that said they had to be paid the same as the leading Australian processor, in this case Murray Goulburn. So Fonterra was caught in a cleft stick, despite its own figures saying that this price could not be justified.

However, to put that in perspective, Fonterra has often made big losses in Australia, given its focus on commodity production and some inefficient processing plant, but having to meet the returns from other processors who were focused on value-add. Indeed, Fonterra’s Australian operations have been a running sore which goes right back to the Dairy Board days when the Dairy Board, acting from ignorance and misunderstanding, came to the rescue of the struggling Bonlac co-operative.

At that time, I was living in Australia and I knew something about Bonlac. I recall a conversation I had with one of the NZ Dairy Board directors at the same time the Dairy Board was doing its due diligence.  I asked whether the Dairy Board understood that Bonlac was a ‘lemon’. The reply came back with some passion: ‘Bonalac is not a lemon; it is a dog. But we, the Dairy Board can turn it around’. Alas, Fonterra is still trying to get that dog to behave.

The latest crunch came in April this year when Murray Goulburn announced that its returns could not support the price they had been paying. They said they needed to bring the payout for the year down to between $AUD4.75 and $5 (finally settling on $4.80). By New Zealand standards, that was still a good price in the current global climate, but it meant clawing back money they had already paid farmers over the previous 10 months. And that was very much a new concept for Australian farmers!

Fonterra then followed suit, saying they would only be paying $1.91 for the remaining months of the year.  Fonterra CEO Theo Spiering said that his aim was to return every dollar he could to the NZ farmers. In response Australian Deputy Prime Minister Barnaby Joyce suggested that Spiering’s message was ‘foolish’.

The key question back then was how did Murray Goulburn get it so wrong? The answer is that several years back they brought in an entrepreneurial leader from the Melbourne business world as their CEO, supposedly on the recommendation of their external directors, to take them to their new value-add future.

They already had an international UHT brand ‘Devondale’ which was doing well – I have often seen it well-displayed in both Hong Kong and Chinese supermarkets. So that gave them a springboard.

Their new CEO took them down a rapid expansion path, including consumer milk powder packs and a range of infant nutritional products. This was funded by bringing in some outside investors, so that Murray Goulburn became a hybrid co-operative. But somewhere along the journey they got ahead of themselves, and their logistics and consumer messaging were not up to scratch.  As for the messaging back to farmers, the hype and rhetoric lost touch with the reality. Some people in the company knew there were problems throughout the second half of 2015, but telling the emperor that he has no clothes is not a good career move.

I have seen the same sort of failures in New Zealand. For example, although many people in the meat industry are disappointed that the likely future of Silver Fern Farms will be under Chinese control, the die was cast some 15 years or so ago when PPCS, as it was then known, set out on a disastrous course of taking over Richmond Meats. That dragged on through the courts for many years and left Silver Fern Farms (the transformed version of PPCS) saddled with unmanageable debt. One of Silver Fern Farms’ directors subsequently put it to me very cogently that the whole saga would never have happened if the Board, led by its Chair, had kept its CEO under control.

Several years ago I could see that another organisation with which I had an association was heading for the rocks. I tried to influence the directors that they needed to act. But as one director said back to me, ‘we have to believe the information we are provided by management’.  Eventually they did act, but the delay has been very costly. So that too was a failure of governance.

Going back to Murray Goulburn, there are at least two important messages. The first is that going value-add requires a lot more than flag waving. It is a difficult journey. The second message is that directors have to be ‘on the ball’, out there in the market place, picking up the vibes, persisting with the difficult questions, and not being foiled by internal company spin. Anything less is dereliction of duty. If they don’t keep asking the questions, and actively monitoring, they will be the last to know.

The future for Murray Goulburn is now problematic. The last few months have been a total muddle. Farmers have left it in droves for the investor-owned firms.  Whether Murray Goulburn can survive long term as a co-operative is now a moot point.

I think back some ten years to when I was travelling in Brazil with one of the Murray Goulburn directors and the discussions we had. He and his fellow directors of that time must be looking back with a combination of distress and anger as to how both governance and management could both get it so wrong and damage their beloved co-operative.

Ironically, Fonterra may end up benefitting from the current shambles. All of the other investor-owned companies are full to capacity, and so farmers departing Murray Goulburn are left with Fonterra as the only alternative.

Fonterra’s new Stanhope factory – replacing the old one which burnt down – will come on stream in mid-2017 and this will give Fonterra considerably enhanced cheese-making capacity.   To fill the factory, they will need to woo some current Murray Goulburn suppliers. These farmers may have no love for Fonterra, but Fonterra looks a better bet than struggling on within Murray Goulburn.

So this is a story that has yet to fully play out. It is worth watching to see how Fonterra manages the opportunity. It won’t just be about Stanhope. Fonterra has also been selling its own value-add jewellery, including both Bega and now Riverina Fresh, as it consolidates around supposed core strengths in cheese, whey powders and nutritionals. Can Fonterra, which has now struggled in Australia for the last 15 years, finally get the dog turned around?

"...the whole saga would never have happened if the Board, led by its Chair, had kept its CEO under control."

"...‘we have to believe the information we are provided by management’. Eventually they did act, but the delay has been very costly. So that too was a failure of governance."

Not coded references to your last employer, Lincoln University?